This story is part of a partnership that includes Capitol Public Radio, NPR and Kaiser Health News. It can be republished for free. (details)

A bill passed by the California legislature this week is putting Gov. Jerry Brown in a delicate position: Sign the measure and support consumer demands for a change in the state’s policy on recovering assets from Medicaid enrollees or keep the current system that generates about $30 million used to provide Medicaid benefits to more residents. 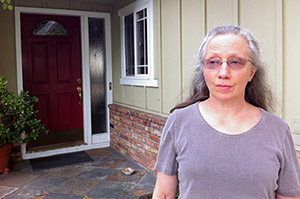 Anne-Louise Vernon from Campbell, Calif. recently enrolled in Medi-Cal, but then found out the state could use proceeds from her home to recover costs of her health care. (Photo by Pauline Bartolone/Capital Public Radio)

The governor typically does not comment on bills until he receives the actual text from the legislature. His Department Of Finance, however, opposes the bill, pointing out that the recovered assets help the state provide services to others.”

The bill that just passed the legislature this week, would prohibit the state from trying to recoup some of the money spent on older Medicaid enrollees for ordinary health coverage by recovering assets after they die.

Federal law requires states to recoup money spent on institutional care, such as nursing homes, by Medicaid, the state-federal health care program for low-income people. But it also allows states to recover costs from people after they die if they received basic medical services through Medicaid at the age of 55 or older.

In California, advocates of the bill say the current law is complicating enrollment in Medi-Cal, the state’s Medicaid program, with some people refusing to sign up, and others terminating enrollment for fear of not being able to pass on their estate. The state has enrolled 2.2 million people into Medi-Cal under the Affordable Care Act.

According to Consumer Reports, California is one of 10 states that recovers funds from estates of Medicaid beneficiaries 55 and older for basic health services. The other states are Colorado, Iowa, Massachusetts, Nevada, New Jersey, New York, North Dakota, Ohio and Rhode Island.

Consumer Reports names an additional 11 states, including Washington, where Medicaid beneficiaries “don’t need to worry” because officials have decided not to pursue the asset recovery. Washington state officials had been planning to do asset recovery but backed off after a Seattle Times story last winter stirred public complaints.

Anne-Louise Vernon had been looking forward to signing up for health insurance under Covered California. She hoped to save hundreds of dollars a month. But when she called to enroll, she was told her income wasn’t high enough to purchase a subsidized plan.

“It never even occurred to me I might be on Medi-Cal, and I didn’t know anything about it,” said Vernon.

She said she asked whether there were any strings attached.

“And the woman said very cheerfully, “Oh no, no, it’s all free. There’s nothing you have to worry about, this is your lucky day.’” she recounted.

Vernon signed up for Medi-Cal on the phone from her home in Campbell, Calif. Just months later, she said she learned online about a state law that allows California to take assets of people who die if they received health care through Medi-Cal after the age of 55.

“So I called Medi-Cal and asked specifically, ‘Does this mean what I think it means?’” she said.

It means Medi-Cal managers can take part of her estate later for health care costs she’s accruing now. Vernon said she’s panicked and worried. She doesn’t get a monthly bill – so she’s not sure what she’ll be accountable for.

“I feel as though right now, if I could go to do the doctor and I felt I knew where I stood, there are a number of appointments that I’d be making right now,” said Vernon. “But I feel so unsettled about this whole estate recovery thing that I’m afraid to go to the doctor.”

The California law has been on the books for two decades. Elizabeth Landsberg of the Western Center on Law and Poverty said it turns what was intended to be a safety net program into a long-term loan program and undermines the security that families might pass on to the next generation.

“So in most cases it’s modest family homes that we’re talking about, and so the state will most often come back and put a lien on that home, and unfortunately it does force the kids to sell the homes sometimes,” said Landsberg.

Landsberg said the law is unfair under the Affordable Care Act, because other people buying insurance and getting premium subsidies through Covered California aren’t subject to the same rules.

During the past 20 years, the state of California has recovered almost a billion dollars that paid for long-term care and basic health services through Medi-Cal.

Calif. Bill Would Protect Estates Of Many Who Received Medicaid