As state governments get ready for the Affordable Care Act coverage expansion, some are taking a close look at their networks of health care professionals to make sure they will be able to meet increased demands as more people gain health insurance. California is one of 15 states expected to consider legislation this year that would give advanced practice nurses more independence and authority. 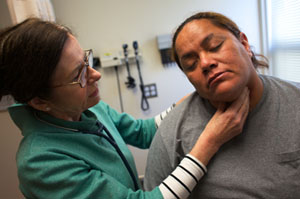 Tina Clark is a nurse practitioner at Glide Health Services, a clinic in San Francisco’s Tenderloin district, a low-income section of the city. Glide is run by nurses with advanced training. A physician visits the clinic 12 hours a week, to sign forms and consult on difficult cases. Even under current law, Clark can see patients without a doctor in the room.

Anastacia Casperson, who has struggled with homelessness and drug addiction, came to the clinic because she was alarmed about swelling in her legs. Clark spends a half hour with Casperson, gives her a prescription for a diuretic and talks to her about quitting smoking. Casperson says she’s been coming to this clinic for a few years.

“They have compassion for a client. They have understanding for a client,” Casperson says. “I like the nurses here because they’re like one big family, and they all work together.”

Right now, California law says nurses must follow procedures set after consulting a doctor. But lawmakers are considering eliminating that requirement. And that idea doesn’t sit well with some doctors.

“Nurses and nurse practitioners are a very, very important part of the health care team, but they are part of a team,” says Dr. Paul Phinney, President of the California Medical Association.

Phinney’s group is opposed to allowing more independence for nurses. He says they don’t have as much training and may not know as much about testing and technology as doctors.

Plus, he says, there’s nothing in the bill that would require the empowered nurses to go where they are needed most.

“I would be very surprised if — should this bill pass — that all of a sudden, you’ll see a massive egress of nurse practitioners out into medically-underserved areas. I just don’t see that happening,” he says.

Nurse practitioners can be trained much more quickly than a physician, and their compensation is lower, Spetz points out.

“So when a legislature is looking at the insurance of hundreds of thousands of people and the demand for care that those people are going to have, getting health professionals to meet their needs as quickly as possible and as cost-effectively as possible is a real need,” Spetz says.

The next step for the California bill on nurses is a hearing in the state Senate Appropriations committee on Monday.

This story is part of a partnership that includes Capital Public Radio, NPR and Kaiser Heath News.