SANTA ROSA, Calif. — Dorothy Hammack had planned to wash her thick, dark hair in the kitchen sink Friday morning. She couldn’t yet shower, due to the incision on her breast from a biopsy a few days before. Her doctor had already called to let her know the results: She had breast cancer.

She was supposed to be researching treatment options and organizing doctor appointments. Instead, Hammack, 79, was standing in her pajamas in the parking lot of a makeshift evacuation center in Santa Rosa, the urban center of Sonoma County’s celebrated wine country. The Kincade Fire was blazing in the mountains above the home she shared in nearby Windsor with her fiancé, Aldo Lovati, 64. Winds predicted to be fast and furious were expected that evening, and the couple was among the 180,000 people who ultimately would be ordered to evacuate as the fire tore through the rugged terrain of northeastern Sonoma County and bore steadily southwest.

Much to Hammack’s dismay, her hair remained wrapped in a gray-and-black nightcap. There had been no time to wash it. She was upbeat, though, laughing at the stream of banter and jokes Lovati told to keep them distracted.

By Saturday, hundreds of others would join them at the shelter set up by the Red Cross at the Santa Rosa Veterans Memorial Building, in the southwestern corner of the city. Across the street, hundreds more evacuees got set up at the Sonoma County Fairgrounds. Like Hammack, many of them came with ongoing health concerns and urgent medical needs made all more challenging by the chaos of evacuation.

Peggy Goebel, a nurse from Windsor, was helping oversee the medical operation, run largely by volunteers who had responded to calls from Goebel or their employers to lend their services. They provided basic care (like making sure Hammack’s incision was clean) and helped people fill prescriptions or get medical equipment such as walkers and wheelchairs. There were also licensed therapists trained to counsel people during disasters. 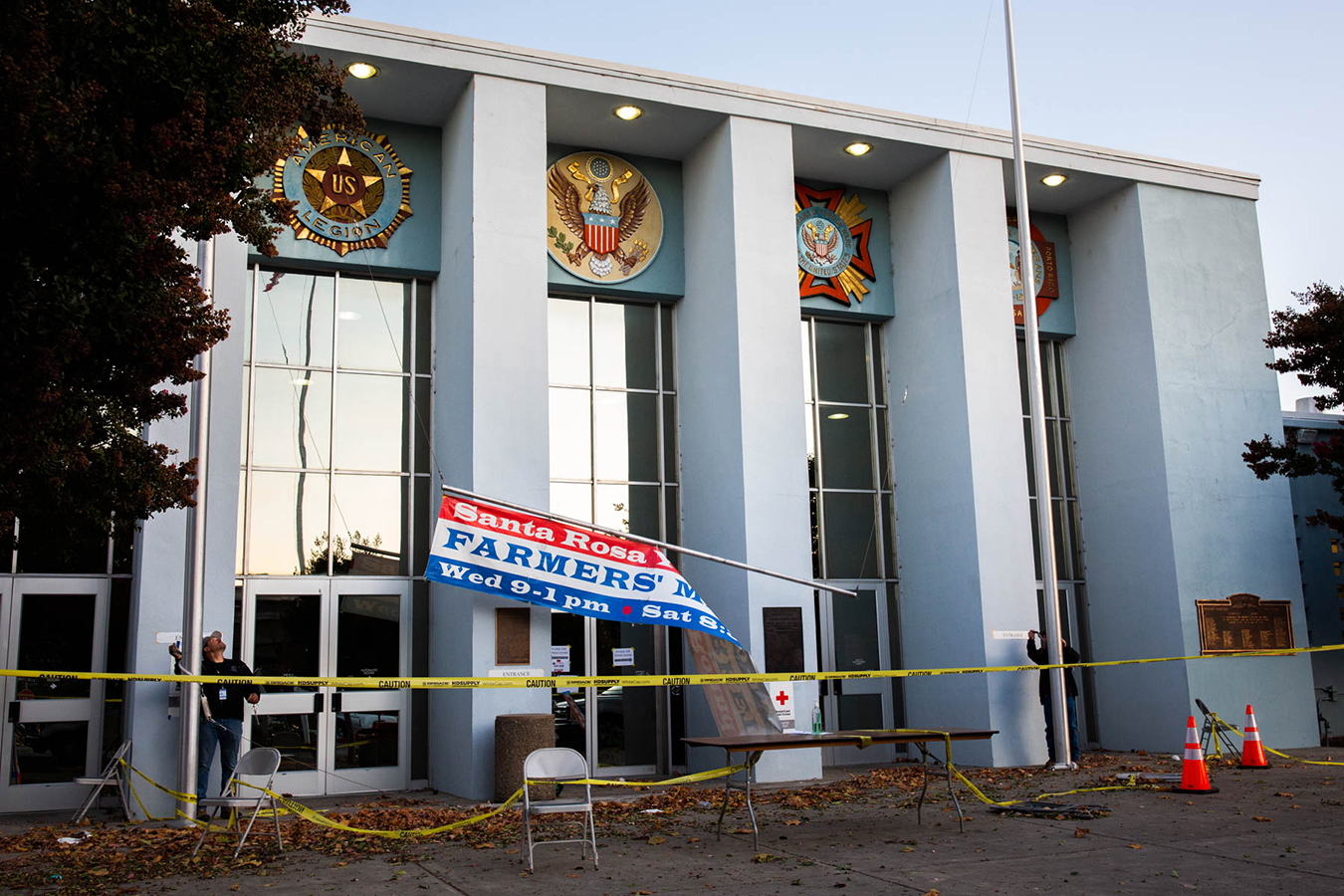 Winds in excess of 70 to 80 mph whipped through the region, bringing down trees and pushing the Kincade Fire toward the house of nurse Peggy Goebel, a Red Cross volunteer, as she helped oversee medical operations at an evacuation shelter in Santa Rosa. (Anna Maria Barry-Jester/KHN)

This is Goebel’s third year volunteering with the Red Cross, a relationship that began during another fire. Twenty-five hours into a shift with no foreseeable end, she still had enough spunk to organize newly arrived volunteer physicians from the local Sutter Health hospital and nursing students from Santa Rosa Junior College, where she teaches. As she showed them around, a fire blazed across the street from her home in Windsor. She didn’t know whether the house would be there when she got back. Her sister’s wasn’t when she returned after the 2017 Tubbs Fire, a massive wildfire that devastated Santa Rosa, killing 22 people and incinerating thousands of homes.

“It’s very traumatic. People just passed the anniversary of the 2017 fires, and they went through this big PTSD,” Goebel said. “Lots of people had issues.”

Two years ago, the situation was very different. In 2017, people arrived at the shelters in the middle of the night, startled awake by a fire that roared fast and unexpected from the forested hills north of town. They came without shoes, in their nightgowns, without medicines, money or important documents. “That was hard to deal with, trying to provide physical, emotional, medical support,” Goebel said.

This time around, people were calmer, because they had time to prepare. The scale of evacuations posed a challenge, but it was nothing like the last time, she said.

That let the medical personnel focus on the extreme needs of some people who ended up at the shelter. There was the frail elderly woman who was near death when she arrived — another volunteer called nearly two dozen convalescent facilities before finding one that could take the woman, ensuring she wouldn’t die in the shelter. And there was the elderly man with dementia who had been dropped off alone. Afraid he might wander away or otherwise hurt himself, fellow evacuees volunteered to look after him during the night.

A police officer brought an elderly woman with Parkinson’s disease after the people living with her decided they couldn’t take her with them during the evacuation. She was taken to a room at the shelter where the elder residents of an assisted living facility in Healdsburg were lined up in hospital beds, many accompanied by their caretakers.

The Red Cross volunteers always ask those caretakers to stay, said Goebel. Not everyone in need came with help, though. Among them were people with Alzheimer’s disease and a man with multiple sclerosis.

As she made her way between the veterans’ hall and the fairgrounds, Goebel said she was rejuvenated by how quickly people mobilized to help one another, and the resilience of her community after the last set of big fires.

Not only had the community pulled together, but it was much better prepared this time. The winds whipping through the region at 70 to 80 mph were stronger than they had been in 2017. But through mass evacuations and an all-hands-on-deck assault on the fire, authorities and firefighters so far have prevented the worst. As of Tuesday morning, there were no deaths and just a couple of injuries.

Patients in the hospitals across the county that had been evacuated were transferred to other facilities without incident. A doctor described the parade of newborns in their tiny beds, taken from Sutter Santa Rosa Regional Hospital’s neonatal intensive care unit and transferred to hospitals farther south. As buses pulled away with patients, two people stood outside clutching a balloon reading, “Congratulations.” 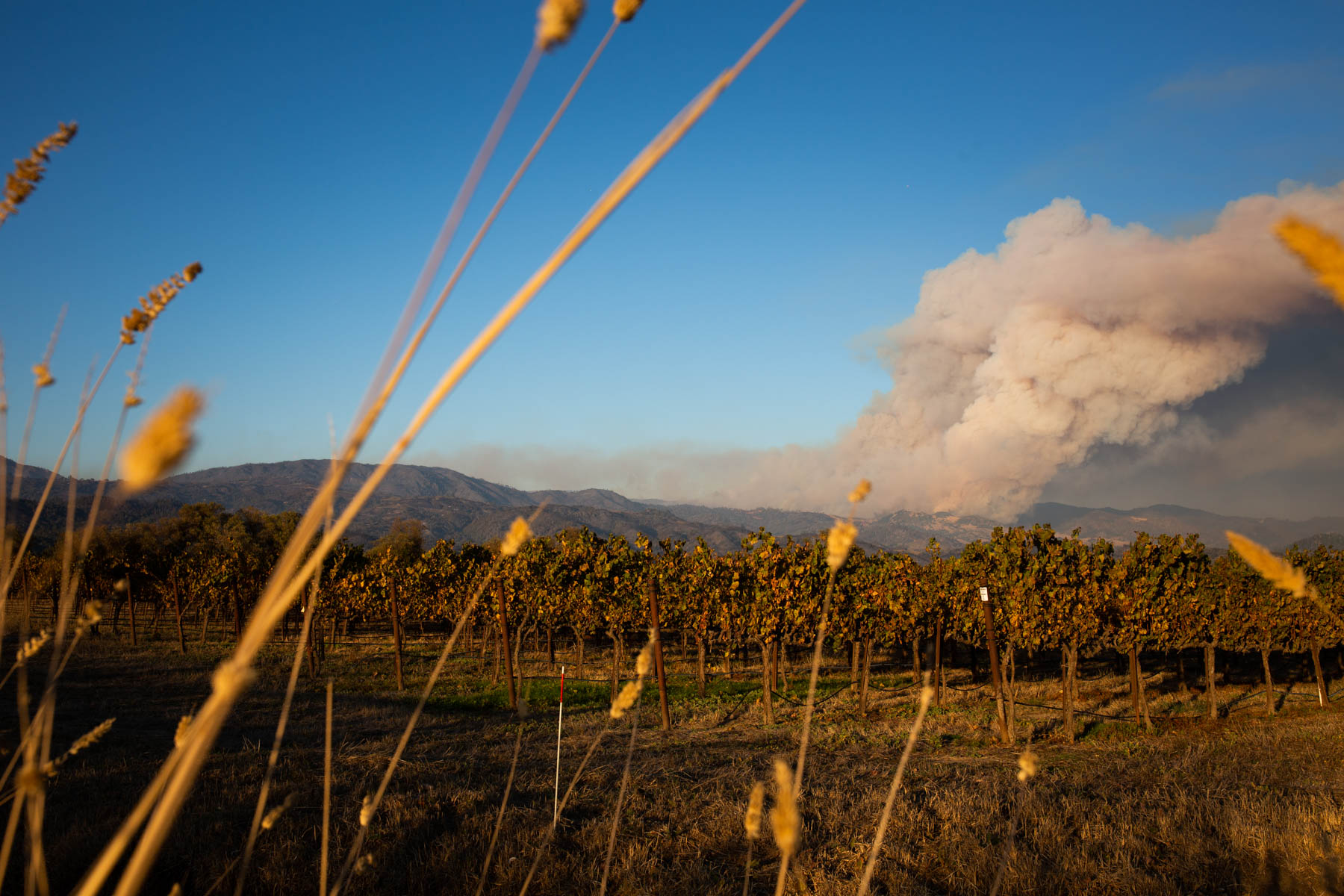 Through mass evacuations and an all-hands-on-deck assault on the fire, authorities and firefighters so far have prevented the worst. As of Tuesday morning, there were no deaths and just a couple of injuries. (Anna Maria Barry-Jester/KHN)

On Saturday, the day after his arrival, Aldo Lovati walked across the same parking lot he had stood in the day before, wearing the same green long-sleeve shirt and gray sweatpants. Today, he was much quieter. It had been a rough night of little sleep in close quarters. He was mad at himself for being ungrateful — he desperately wanted to focus on the generosity of strangers, and how lucky they were to have food and shelter. But he was feeling tired, sad and frustrated. “I’ve lost my dignity in here; I just really feel that I’ve lost my dignity,” he said.

Lovati had struggled through some mental health issues that predate the fire. A breakdown a few years ago had taken a toll on family relationships, and it was all coming to the surface now that he was in need of help. “It’s gotten to me. I just want to go home,” he said.

Hammack wandered out to find him, her thick, dark hair fluttering in the wind, and the two held hands as they talked. She, too, was feeling more tired than the day before, and the news of her diagnosis was starting to set in. The incision from her biopsy hurt; she was supposed to put hot compresses and pressure on it and made do with unused sanitary pads she’d gotten at the makeshift Red Cross clinic. They began to laugh again, recounting how she’d pulled one out to give him when they couldn’t find a napkin at lunch.

Hammack said she was tired and wanted to go back in to lie down on a cot. Lovati agreed she should be lying down and asked why she had come out. “We’re a couple, right? We look out for one another,” she replied.