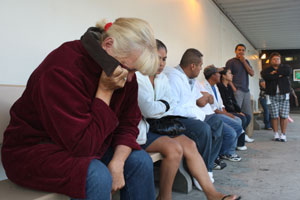 SANTA ANA, Calif. — Robin Willer slumps on the metal bench, her sweater drawn up over her swollen cheeks. “The cold hurts it,” she says, pointing gingerly to three broken teeth.

Willer, 56, a banquet waitress who lost her longtime job in June 2008, is waiting in a chilly back alley behind Orange County’s emergency dental clinic. It’s not yet dawn. More people are arriving, by bus, car and on foot. The race is on to win one of the few slots in a dentist’s chair today. Even though the clinic’s doors don’t open until 7:30 a.m., the rush began at 5:30.

“We were all running across the parking lot, trying to get here first,” says Willer, who missed out the day before because she was too far back in line. “At least I’m number two today.”

Just six months ago, Willer could have sought dental care at a wider variety of better-funded and better-staffed dental clinics. And many in line with her would have been at private dentists’ offices, their care covered under Medi-Cal, the state’s version of Medicaid. As of July 1, all that changed.

With a nip here and a slash there, California’s budget crisis is now affecting health care for millions of residents, from wealthy Orange County to the struggling city of Oakland. State officials have made tough cuts to health services once deemed vital. Funds for county and community dental clinics were slashed, just when those who lost Medi-Cal funds for private dental care began showing up at their doors. Foot and eye care are also out, along with hearing aids, mental health care and other services long covered under Medi-Cal, but now trimmed by state officials to save $130 million. More than two million people lost the services.

But that’s not all. State funds for such programs as HIV/AIDS testing and home care for the elderly have also been eliminated.

Fraying safety net ‘when it’s needed the most’

It could have been worse: legislators restored funds for nearly one million children in the “Healthy Families” program, after health insurers agreed to be taxed in exchange for continued, lucrative public contracts.

Facing a two-year, $60 billion budget gap, and federally obligated to enroll eligible Medi-Cal applicants, state officials said they had no choice but to trim benefits from the massive program and cut other services. With unemployment at 12.2 percent, a flood of newly impoverished Californians are applying for Medi-Cal, officials say. An additional 300,000 residents enrolled last year, and another 400,000 are expected to sign up this year, which would bring the total in the program to an all-time high of 7.2 million residents.

Some experts say the array of health care services that took decades to knit together is now being unraveled, at the worst possible time.

“The fact is that we have a very high unemployment rate right now, we have health insurance provided by employers that wasn’t in great shape even before the recession, and we have people less able to afford their own insurance than ever before,” said Marian Mulkey, senior program officer at the California Health Care Foundation.

“And when you take all those developments on the private side of the equation and you line that up against the significant cuts in public programs…you have a safety net is that is fraying just when it is needed most.” 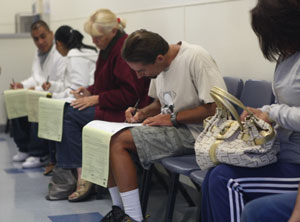 Kimberly Belshe, Secretary of the California Health and Human Services Agency, said the state is enduring a “perfect storm” of converging problems and no easy solutions. “The bottom line is some very difficult reductions were included in the decisions that affect health care,” she said.

“At the same time, funding for 7.2 million individuals is remaining in the budget. California continues to provide a fairly comprehensive package of benefits to support the Medi-Cal program.”

But not comprehensive enough for Francine Williams. The 54-year-old Oakland resident is a late-stage diabetic who also has kidney disease and requires dialysis treatment. She works part-time for the Red Cross when she can, earning, at most, $200 a week. Because of her disabilities and low income, she receives both Medi-Cal and Medicare benefits. Like others in the state program, as of July 1 she lost services that were previously covered. By refusing to fund less expensive care now, she argues, far more costly medical problems can develop.

“When you have diabetes, it affects every part of your body, from the top of your head to the bottom of your feet,” she said. Infections can easily develop in her gums, but bi-annual teeth cleanings designed to prevent such infections are no longer covered.

Diabetics are also advised to have their toenails trimmed by a medical professional, because they may not be able to feel a cut, which can lead to serious infection. But Medi-Cal no longer pays for that, either. That worries Williams, who had two toes amputated 10 years ago because of infection from a glass cut she couldn’t feel.


Health care advocates note that budget cuts cost the state huge amounts of federal funds. A prime example: The $130 million California saved by cutting dental care and other Medi-Cal optional services cost them another $130 million in federal matching funds. But state officials say that the federal government has in fact already provided an extra $4 billion, part of its economic stimulus money, and that they’ve asked for another $1 billion.

National health care overhaul legislation could help repair the safety net. Many uninsured Californians could obtain coverage through federal subsidies of private insurance and an expansion of Medi-Cal would include larger numbers of lower-income people. But there’s a potential downside: states may be required to kick in some matching funds for their Medicaid programs.

For now, Californians cope as best they can. The July cuts had immediate impact. During eight days in mid-August, nearly 10,000 people crowded the Inglewood Forum in Los Angeles County seeking free dental and other medical care from a nonprofit, mobile hospital clinic. More than 6,300 patients were seen by 3,800 volunteer dentists, gynecologists and other medical personnel. They extracted 2,274 teeth, filled 5,483 cavities, and performed nearly 1,000 mammograms, Pap smears and other vital exams. Thousands more prospective patients were turned away. 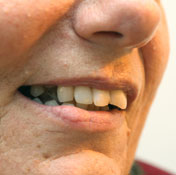 Robin Willer had lots of company the morning she stood outside the clinic in Orange County. Many were newly unemployed; others had two jobs, trying to make ends meet.

Graduate psychology student Brandon Greenhouse, 27, said he spent days waiting with hundreds of others in line at Long Beach clinics before hearing that Orange County lines might be shorter. He lost a good-paying job with health benefits last fall, and his dentist warned him to have his wisdom teeth removed before his benefits expired. But they weren’t hurting, “and to tell the truth, I’ve always been a little scared of going to the dentist.”

But a few weeks ago, pain began building in his lower jaw. “It’s like desperation at this point,” he said.

Living on a boat


Willer listens quietly as many in line share their stories. Dressed in a turtleneck and neat jeans, she would fit in at the country clubs where she used to work. But she has lost her job and her home, and is now living in a few feet of space in the bow end of her ex-husband’s Newport Beach boat.

A few weeks ago, she cracked her teeth biting on hard cereal, and the pain has grown ever since. Living on $1,800-a-month unemployment checks leaves no margin for illness  and not enough money to pay the $1,050 that one dental chain wanted to yank all three teeth. This is her third attempt to see a dentist.

Puffy-faced and feverish from the pain, she says it is “humiliating” to be here. But she has no choice. “I don’t want to be vain, but I can’t afford dentures…How am I going to get a job with holes in my mouth? And employers want you to be up and perky. It’s hard to do when you’re in pain.”

When the door to the Orange County clinic opens at 7:30 a.m., Willer and the others push forward. She receives a clipboard to fill out her information and pays a $15 required fee. A shy smile fills her face. “I think I might make it in today,” she says.

Two hours later, Willer’s back at the boat. She’s nauseous from eating only yogurt and other soft food for days, on top of ibuprofen pills. Her teeth were so painfully infected that even a huge dose of Novocaine couldn’t numb the area. The dentist couldn’t pull her teeth, and gave her a prescription for antibiotics to clear up the infection first.

“The good news is I don’t have to wait in line, I have an appointment for next week,” she says wearily. “The bad news is it’s only for one tooth. They only do one tooth per visit.”