Christy O’Donnell may not get the death she had hoped for — one that right-to-die advocates say she deserves.

A California judge on Monday dismissed her end-of-life lawsuit.

“You’re asking this court to make new law,” San Diego Superior Court Judge Gregory Pollack said during a hearing Friday. “If new law is made it should be by the Legislature or by a ballot measure.” 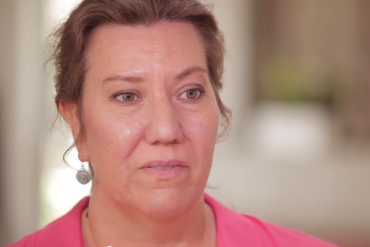 Christy O’Donnell, who has advanced lung cancer, is suing for the right to a doctor prescribe life-ending medications. (YouTube)

The dismissal is a setback for aid-in-dying advocates, who argue that physicians should be able to prescribe life-ending medications for terminally ill patients who request them to avoid unnecessary suffering. Earlier this month, a proposed right-to-die bill stalled in the California Legislature after a concerted campaign to defeat it by Catholic church officials.

O’Donnell’s case, which was joined by two other patients and a San Diego doctor, was supported by Compassion & Choices, an advocacy group. The group plans to appeal, but the legal process may take longer than O’Donnell has — her doctors earlier said she might not survive through this summer.

The dismissal also may affect a similar California lawsuit filed in February by two physicians and other plaintiffs with terminal illnesses.

O’Donnell, 47, a civil rights attorney from Santa Clarita, near Los Angeles, is suffering from advanced cancer that has spread to her lungs, brain, spine, ribs and liver. She made headlines earlier this year when she sued the state to allow her doctor to prescribe life-ending medication for her without fear of prosecution. O’Donnell cannot tolerate morphine and as her cancer worsens, her pain-relief options are limited.

“This is not the outcome I had prayed for, but as a lawyer, I am confident the appeals court will see our case in a different light,” O’Donnell said in a written statement. “I don’t have much time left to live and that is why I support all end-of-life options, whether they are authorized by litigation or legislation. These options are urgent for me.”

The right-to-die movement has gathered steam in California and nationally after the well-publicized death of brain cancer patient Brittany Maynard, who moved to Oregon to take advantage of the state’s Death With Dignity law. Maynard died at age of 29 in November after taking a life-ending dose of barbiturates prescribed by her doctor. Since then, no states have passed right-to-die legislation, and efforts have been defeated or stalled in several.

However, court decisions or laws in Oregon, Vermont, Washington and Montana allow doctors to prescribe life-ending drugs. A ruling in district court in New Mexico gave doctors that right, but it is under appeal. Pending court cases in Tennessee and New York could give physicians the same power.

Californians Against Assisted Suicide, a coalition of physicians, disability rights and religious groups, opposes the right-to-die movement as medically unethical and a slippery slope to harming disabled and terminally ill patients who don’t have equitable access to health care.

“Assisted suicide will always be the cheapest option in a cost-conscious health care system,” said Tim Rosales, a spokesman for the group.

As O’Donnell’s attorneys prepare their appeal in the San Diego case, Compassion & Choices plans to continue its efforts to pass aid-in-dying legislation in California and nationwide, said spokeswoman Patricia González-Portillo. She noted that a recent public opinion poll of California voters found that nearly 70 percent would support such legislation.

“We’re doing everything we can to make it happen in California,” González-Portillo said. We owe it to Brittany Maynard, Christy O’Donnell and so many other terminally ill Californians who are asking for these end-of-life options. It’s urgent — they don’t have time to wait.”

The Associated Press contributed to this report.