UPDATE: This story first published on March 30 and has been updated.

The lawsuit marked a bold move by state Attorney General Xavier Becerra against the dominant health care system in Northern California as concerns mount nationally about consolidation among hospitals, insurers and other industry middlemen.

The antitrust suit, filed in San Francisco County Superior Court, asks the court to prevent Sutter from engaging in anticompetitive practices and “overcharges.”

It said Sutter employs a variety of improper tactics, such as gag clauses on prices, “punitively high” out-of-network charges and “all-or-nothing” contract terms that require all of its facilities to be included in insurance networks.

Taken together, Sutter’s actions “improperly block any and all practical efforts to foster or encourage price competition between Sutter and any rival Healthcare Providers or Hospital Systems,” according to the state’s complaint. “Sutter’s conduct injured the general economy of Northern California and thus of the state.”

In a statement Friday, Sutter said it had not yet seen the state’s complaint and couldn’t comment on specific claims.

Overall, Sutter said, “healthy competition and choice exists across Northern California” for consumers seeking medical care. It also said its charges for an inpatient stay are lower than what other nearby hospitals charge.

“Sutter Health is proud to save patients, government payers and health plans hundreds of millions of dollars each year by providing more efficient and integrated care,” the statement said.

This high-profile legal fight caught the attention of employers and policymakers across the country amid growing alarm about the financial implications of industry consolidation. Large health systems are gaining market clout and the ability to raise prices by acquiring more hospitals, outpatient surgery centers and physicians’ practices.

“There are a number of markets in the U.S. that are dominated by one very large, powerful health system,” Gaynor said. “It could be that we’re going to see a new level of activity by state antitrust enforcers looking at competition in their own backyards.”

Glenn Melnick, an economist and expert on hospital finances at the University of Southern California, said if the state prevails against Sutter it could put “a chill on anticompetitive practices that are being adopted across the U.S. and that could help slow down hospital price increases. That would be good news for consumers.”

The complaints about Sutter’s high prices and market power have persisted for years.

The state said its investigation started in 2012 under Kamala Harris, California’s previous attorney general and now a U.S. senator. Six years ago, her office sent subpoenas to several health systems and insurers seeking information about market concentration and its effect on medical prices.

A 2016 study found that hospital prices at Sutter and Dignity Health, the two biggest hospital chains in California, were 25 percent higher than at other hospitals around the state. Researchers at the University of Southern California said the giant health systems used their market power to drive up prices — making the average patient admission at both chains nearly $4,000 more expensive.

This week, researchers at University of California-Berkeley issued a report that examined the consolidation of the hospital, physician and health insurance markets in California from 2010 to 2016. The authors said 44 of California’s 58 counties had “highly concentrated” hospital markets.

The problem is worse in Northern California, and the report said prices for medical procedures are often up to 30 percent higher there than in Southern California, which has more competition.

“Consumers are paying more for health care as a result of market consolidation. It is now time for regulators and legislators to take action,” according to the report by the Petris Center on Health Care Markets and Consumer Welfare at UC-Berkeley.

After the report was issued Monday, Becerra said his office would be reviewing those findings and pledged to apply more scrutiny to health care mergers and anticompetitive practices across the state.

Sutter Health has gobbled up doctors’ practices across the Bay Area, gaining market muscle that has pushed costs upward. Obstetricians employed by Sutter Health, for example, are reimbursed about three times more for the same service than independent doctors, according to a KHN review of OB-GYN charges on several insurers’ online cost estimators. It’s a key reason why Northern California is the most expensive place in the country to have a baby.

At his news conference, Becerra said he’s committed to scrutinizing other players besides Sutter in the health care industry who may be engaging in anticompetitive behavior and potentially harming consumers.

“We hope what we do with this case sends a signal — watch what you do and obey the law,” Becerra said.

“Consumers bear the burden of these monopolistic activities,” said state Sen. Ed Hernandez (D-West Covina), chairman of the Senate health committee. “To ensure health care is affordable and accessible to all, we have to get a handle on predatory pricing.”

In many ways, Becerra’s lawsuit mirrors a similar civil case filed in 2014 by a grocery workers’ health plan. 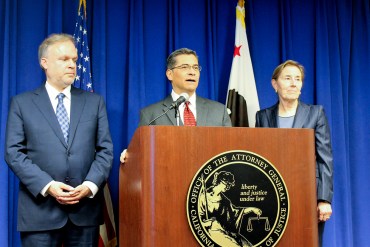 The plaintiffs in that case allege Sutter is violating antitrust and fair competition laws. The plaintiffs have been requesting documents related to contracting practices, such as “gag clauses” that prevent patients from seeking negotiated rates and choosing a cheaper provider. They also are challenging “all-or-nothing” terms that require every facility in a health system to be included in insurance networks.

In November, the state judge handling the grocery workers’ case said Sutter was “grossly reckless” when it intentionally destroyed 192 boxes of documents that employers and labor unions were seeking in the lawsuit. San Francisco County Superior Court Judge Curtis E.A. Karnow said Sutter destroyed documents “knowing that the evidence was relevant to antitrust issues. … There is no good explanation for the specific and unusual destruction here.”

The lead plaintiffs, the United Food and Commercial Workers and its Employers Benefit Trust, are a joint employer-union health plan that represents more than 60,000 employees, dependents and retirees. The court certified its case as a class action in August, allowing hundreds of other employers and self-funded health plans to potentially benefit from the litigation.

The attorney general’s office filed a motion in court asking for its lawsuit and the class action to go to trial together before the same judge. The trial is scheduled for June 2019 in San Francisco.

“While we certainly would have preferred this happened earlier, we respect the attorney general’s care in conducting a thorough investigation before filing charges,” said Richard Grossman, the lead plaintiffs’ lawyer representing the class of more than 1,500 employer-funded health plans. “This lends additional credibility to the allegations we made in our complaint four years ago.”

In its lawsuit, the attorney general’s office blamed Sutter for much of the increase in health care costs across Northern California because “Sutter embarked on an intentional, and successful, strategy of securing market power in certain local markets.” State lawyers also pointed out that Sutter’s conduct triggered an “umbrella effect” by encouraging other providers to  raise their own prices.

The state’s lawsuit said Sutter used its windfall from excessive prices to acquire more hospitals and medical groups. It also enabled Sutter to “bestow extremely high salaries for its officers and upper management,” according to the state complaint.

Patrick Fry, Sutter’s chief executive from 2005 to 2016, had $13.4 million in total compensation during his last year there, according to Sutter’s 990 tax filing for 2016, the most recent year available.

Overall, 18 executives at Sutter had $1 million or more in total compensation during 2016, the federal tax filing shows.

Karen Garner, a Sutter spokeswoman, said Fry’s compensation in 2016 reflects retirement benefits he accrued over many years. She added that “industry comparisons show our salaries are reasonable and competitive, given the size, scope and complexity of our organization.”