California’s insurance marketplace for small businesses has attracted just a fraction of eligible companies, with most being deterred by technology glitches, paperwork delays and customer service problems. 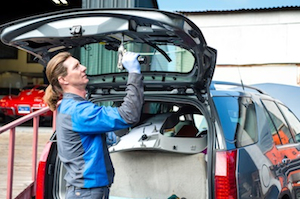 Joshua Horn has worked at Del Mar Automotive for more than 7 years. Although he recently had to change his health plan, he said he’s still content with the coverage his employer provides (Photo by Heidi de Marco/KHN).

The program, designed to make insurance more affordable and easier to purchase for small businesses, has only attracted about 1,200 companies. There are roughly 700,000 small businesses in the state, and more than half could be eligible for tax credits under the health law, according to the Small Business Majority, a national organization of small businesses.

Companies said Covered California, the state-based exchange, has primarily focused on individual patient enrollment to the detriment of the small business marketplace, known as the Small Business Health Options Program, or SHOP.

“The SHOP program has kind of taken a backseat,” said John Kabateck, the California executive director of the National Federation of Independent Businesses. “There wasn’t an intent to ignore small businesses. That just didn’t become a priority.”

There is currently no way to enroll online and applications take weeks or months to process, business groups said.

“We were hoping it would be easier, faster, more streamlined,” said David Chase, the California director of Small Business Majority. “We are hoping that Covered California can put some much overdue attention on these issues.”

California opened its small business exchange in October and began offering online enrollment in November. But in February,  after applicants ran into such glitches as error messages or delays in loading pages and some applications came in incomplete,  the exchange suspended Internet sign-ups to create a new version of the online portal and instructed businesses and their brokers to enroll for now with traditional paper applications. The new version is expected to be up again in the fall and include improvements such as more efficient service and a better way to determine eligibility for the program.

The launch of the small business marketplace was “not really successful,” said Micah Weinberg, a senior policy advisor at the Bay Area Council, an employer-backed public policy organization. “Now they have gone back to the drawing board,” he said. 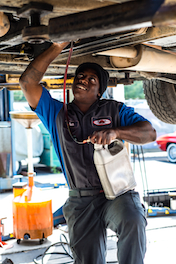 The problems may seem to echo those that surfaced during infamous launch of the individual marketplaces around the country, which was characterized by technical failures and intermittent shutdowns.  But at least in the case of Covered California, officials were able to continue enrolling consumers online and the problems were fixed within a few months, Weinberg said. The more complicated business exchange, on the other hand, had much more significant problems that required starting from scratch, he said.

Covered California spokeswoman Anne Gonzales said the exchange has been “challenged by some complex system issues.”

“Understandably, Covered California was focusing a lot of time and resources on getting our individual market up and running,” she said. Now that the individual market has closed, she said, “SHOP is going to be a primary focus.”

In addition to technical improvements, she said the exchange is working with brokers to complete applications that were filed with missing information.

Businesses with fewer than 50 full-time employees are not required to offer insurance under the law. But by purchasing plans through the exchange, they can give their workers a choice of plans – which most have been unable to do in the past.

There are also tax credits available for businesses with fewer than 25 employees who are paid on average less than $50,000. Businesses with 10 or fewer employees are eligible for the highest credits. The tax credit – only available through the exchange – can be received for two years.

Allen Phillips, who owns Del Mar Automotive with his son, said he signed up for the SHOP so he could receive about $4,000 in tax credits. He applied in January but by mid-April, he was still waiting for insurance cards for the staff. “It’s absolutely making me crazy,” he said.

Phillips said that for several years, the company has offered insurance to its employees, a move that has helped it to keep good technicians. He is switching from an Aetna plan and instead giving his employees a choice under Covered California between Kaiser Permanente and Sharp Health Plan.

Covered California is using these expanded choices as a selling point. Last month, it  launched a marketing campaign emphasizing the new options and control that SHOP offers small companies. The exchange is targeting microbusinesses with 10 or fewer employees, and is also relying on brokers to get the word out to small companies.

Insurance agents are key to the program’s success,  but many brokers are wary because of the delays, the sign-up difficulties and the fact that few clients have qualified for the tax credits. If agents don’t find any value in SHOP or think it’s going to be too difficult to enroll, they are not going to refer their clients, said Chase of the Small Business Majority.

Orange County insurance broker Kathy Hope, who is certified by Covered California to offer its plans, said the SHOP is “just a mess” and insurers  are offering comparable products outside of the marketplace, so there is little reason to enroll.

“I certainly didn’t encourage anyone,” she said. “I would much rather go direct.”

The technology and operational problems are depressing enrollment in business exchanges across the nation, said Kevin Lucia, project director at Georgetown University’s Health Policy Institute. Seventeen states have their own business exchanges, and the federal government is running the others.

Despite the start-up challenges, states have made the right policy decisions to make the business exchanges work, including attracting a variety of insurers. “It is going to take some time for the IT to catch up,” Lucia said, referring to information technology.

Zachary Davis, co-founder of the Penny Ice Creamery and The Picnic Basket café in Santa Cruz, considered signing up for the small business exchange but said the premiums were higher than his existing Blue Shield plan. There were also a lot of unanswered questions, such as what plans would be involved and what they would cover.

“For a business, that makes it really difficult,” he said. “It made sense for us to continue what we were doing” and stick with the old plan.

Virginia Donohue, who owns Pet Camp in San Francisco, a pet-sitting and training service for dogs and cats, also chose not to sign up for Covered California. She supports the exchange and wants to be able to provide more choice to her employees, but Donohue said she worried about the paperwork processing delays.

“The whole system is overwhelmed right now,” she said. “California is so backed up that we decided it was wise to wait.”

The tax credit is a relief for some small businesses, but getting it “requires red tape, time and expense,” said Kabateck of the National Federation of Independent Businesses. “We are encouraging our members to look both in and out of the market.”

Janico Building Services in Sacramento, which provides janitorial services to hotels in the Sacramento region and the Bay Area, has offered insurance to full-time employees for the past 20 years. “We often go against the big boys in our industry,” said owner Lorenzo Harris. “We have to stay in lock step with them in terms of attracting labor.”

Harris said he enrolled himself in the individual exchange and four full-time employees in SHOP. There were some glitches during the application process but Harris said he was thankful to be saving money on his premiums.

“It’s new, so there are a lot of bugs in the system,” he said. As for the coverage itself, Harris said, “The jury is still out.”