Diane Schoenfeld comes every Friday to the Chaparral House nursing home in Berkeley, Calif. to spend time with her aunt, Lillie Manger.

“Hi Aunt Lill!” she says, squatting down next to her aunt’s wheelchair, meeting her at eye level.

Manger is 97. She has straight white hair pulled back in a neat bun today. It’s tied with a green scarf, a stylish reminder of the dancer she used to be. 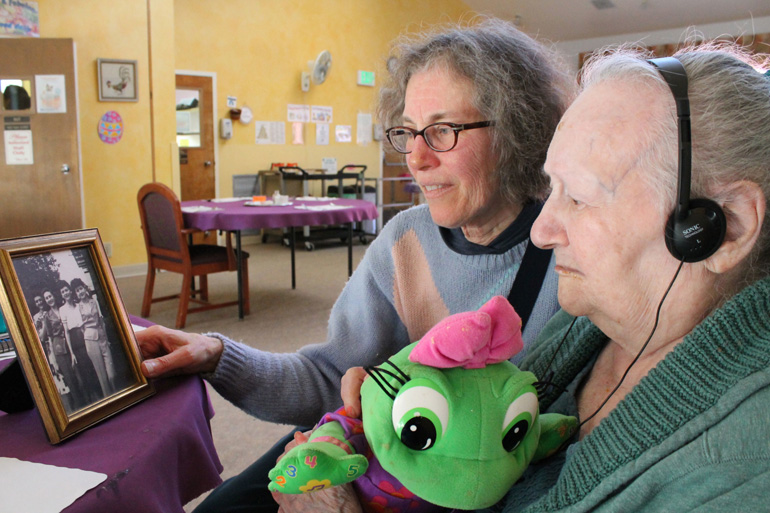 They go together to the dining room to look over family pictures. Manger needs to be reminded who is in them. Including one of herself. “That’s me?” she asks. “That’s you,” her niece confirms.

“Am I supposed to remember?” says Manger.

Schoenfeld smiles at her encouragingly: “I don’t know if you’re supposed to. It’s OK either way.”

Manger has dementia. Schoenfeld is her “surrogate decision maker” meaning that legally, she is the person who makes decisions about Manger’s health care. Schoenfeld says Chaparral House is the second nursing home where Manger has lived. The first was 45 minutes away, and Schoenfeld wasn’t able to visit as often.

At that first home, caregivers recommended antipsychotic sedatives for some of Manger’s behaviors, like crying out and outbursts. Schoenfeld wasn’t thrilled about the idea but agreed to it, thinking her aunt might get better care if staff members weren’t unhappy with her behavior.

Coming Out of a Fog

Two years later, Schoenfeld moved her aunt to Chaparral House to have her closer. By this time, Manger appeared to be in a fog. Eventually, Schoenfeld broached the idea of weaning her aunt from the medication. As soon as they did, she says things turned around.

“I could see her personality again, I was so happy,” Schoenfeld said. “My sister came to visit and (Aunt Lill) used my sister’s name and clearly recognized her, which we had not seen in the years that she was on the medication. I only wish I had done that sooner.”

Schoenfeld says it just didn’t feel right to have her aunt sedated. “If a baby is crying, I mean most people will go to a baby and comfort them. They won’t try to ignore them and drug them,” she says.

KJ Page, administrator of Chaparral House, shares that philosophy. Page says in many cases, dementia patients came to their facility with a prescription to be given antipsychotics half an hour before bath time. Then, a number of years ago, she read a book called Bathing Without a Battle about why it can be such a challenge to bathe dementia patients.

She asks people to imagine putting themselves in the place of the nursing home resident. “A person they didn’t know, couldn’t recognize, comes to take off their clothes,” she says. “Ah! No wonder they’re screaming and fighting and kicking!”

Page says after that “Aha!” moment, the staff came to a new agreement. The residents were not out running marathons or engaging in other sweat-inducing activities, so regular showers weren’t necessary. Instead, residents would have a regular caregiver do simple sponge baths.

“It just rolled into what else are they fighting for, and why do we need to have a fight?” Page says, “What can we do to make it easier for people and the staff? And that’s how we approached it from there on.”

It worked. While Page says antipsychotics do have a place for some people, not one of Chaparral House’s dementia patients is currently taking the medications.

Chaparral House’s experience is unusual. In California nursing homes, just over 15 percent of dementia patients are on these drugs. That’s far more than advocates say is necessary. But that is actually down from almost 22 percent just three years ago. That’s when the federal government began regulating their use for dementia patients in nursing homes. This came in response to several studies warning the medicines had serious risks, including strokes, falls and even death.

The new guidelines stipulate that nursing homes are graded on the percent of their dementia patients receiving antipsychotic medications. That figure becomes part of their rating on Nursing Home Compare, a tool from Medicare that helps consumers compare information about nursing homes.

The drugs are traditionally deployed to control what are seen as problem behaviors. Reducing the medication requires new approaches and retraining staff.

Caroline Stephens, assistant professor at the University of California – San Francisco School of Nursing, who specializes in psychiatric care for the elderly and long-term care policy, says that the new regulations have had a positive impact on staff. “They’re now realizing we don’t have to reach for the medication and they’re getting to think creatively about what we can do for this resident.”

As a consultant at the Hayward Healthcare & Wellness Center nursing home in Hayward, Calif., Stephens helps train nurses and staff on person-centered care, which means being attentive to the cues people give and trying to understand what is bothering them even if they can’t communicate it directly.

Stephens says the new regulations have given more credence to the approach. She describes one of her success stories in helping a dementia patient who was always fighting to leave the facility at the end of the day.

“They felt they needed to catch the bus, they had to get home because they need to take care of their daughter,” she says.

Instead of physically restraining the person or prescribing medication, Stephens says they put a sign on the door that said, simply, “It’s a holiday; buses aren’t running today.” The sign worked. The person stopped fighting to leave and there was no need for antipsychotic medication.

At another nursing home, Stephens consulted with staff about a resident who was disruptive and constantly wandered at night — including into other patients’ rooms. He had been given an antipsychotic to control his behavior. But in a deeper look at his background, staff learned that he’d worked as a night security guard for most of his adult life.

The staff came up with a new plan. They gave the resident a badge and clipboard and walked with him on an abbreviated set of “evening rounds.” Sure enough, he’d willingly go to bed after that and they were able to take him off medication.

Stephens says when the patients themselves can’t communicate, it’s vital to talk to family, to find out what the person did for a living and what they enjoyed in life.

“It is our job as clinicians to be good detectives,” she explains.

This is especially important as nursing homes serve an increasingly diverse clientele. Stephens says the nursing home model was built around an older, white, female patient. Today, the demographics have changed.

At Hayward Healthcare and Wellness, she says, “There are probably 15 different racial groups and a minimum of five languages spoken.”

One of the big advocates for the federal regulations was Tony Chicotel, staff attorney with California Advocates for Nursing Home Reform. He welcomes the guidelines but says he is concerned about an unintended consequence.

While across the state the overall rate of antipsychotic use has dropped, he says that several hundred nursing homes have rates that have either stayed the same or increased, in some cases almost doubled.

Chicotel says that in an effort to decrease their patients on antipsychotics to get better ratings, some facilities may be cherry-picking patients, essentially warehousing the hardest to wean from anti-psychotics in the bleakest facilities.

Chicotel says families and caregivers can look up a nursing home’s antipsychotic drug use rates as well as other drug usage data on websites, including Nursing Home Compare.

Still, these guidelines and ratings cover only nursing homes. Increasingly, Chicotel says, he is fielding calls from families worried about the use of antipsychotics in assisted living and home care settings, which aren’t covered by the regulations.

“We need to be more proactive about trying to get data for assisted living facilities and reconfiguring our message so it’s more applicable to assisted-living facilities,” Chicotel says.

Earlier this year, the GAO released a report urging HHS to expand its regulation of antipsychotics in dementia patients to settings besides nursing homes.

UCSF professor Stephens says this points to retraining ever more medical professionals in patient-centered care, eliminating the need for patients to be medicated as a form of restraint.

“If we can train generalists, I think we can make some headway,” she says.

Rachel Dornhelm wrote this piece with support from the Journalists in Aging Fellows Program of the Gerontological Society of America and New America Media, sponsored by the AARP. It appeared first on KQED’s State of Health blog.