Cancer treatment is changing: Increasingly, pills are the drug of choice rather than intravenous chemotherapy that drips into a patient’s vein. 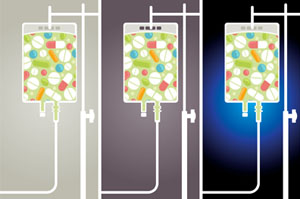 In contrast to conventional IV chemotherapy, which often kills both cancer and healthy cells alike, many of the new oral oncology drugs target specific biologic processes in cancer cells and block their growth. In addition to being highly effective, they’re convenient, especially for patients who live far from a treatment facility.

And the trend is accelerating. At least 25 percent of the drugs in the oncology pipeline are oral medications.

Health plans, however, have been slow to adjust to the change. People who get traditional IV chemotherapy on an outpatient basis often pay a flat co-payment that covers the drug as well as the cost of administering it. Annual out-of-pocket costs are also typically capped.

Oral anti-cancer medications, on the other hand, are generally considered a pharmacy benefit. Instead of a co-payment, plan members often pay a percentage of the drugs’ cost — up to 50 percent in some cases — with no annual out-of-pocket limit. And these drugs are expensive, often costing tens of thousands of dollars a year. In recent years, states have stepped in to address the problem. Since 2007, 19 states and the District have passed laws requiring insurers to provide coverage for oral cancer drugs that is equivalent to infusion drugs, according to the National Patient Advocate Foundation (see details in this map from the NPAF). Five states, including Virginia and Maryland, have passed laws in 2012 alone, and others are considering proposals, according to advocacy groups.

Patient advocates say these oral oncology parity laws, as they are called, give patients more-affordable access to the best treatment available.

“Some of these drugs work when nothing else does,” says Dr. Len Lichtenfeld, deputy chief medical officer for the American Cancer Society. “But if a patient needs a new targeted therapy like [the lung cancer drug] Tarceva, he may end up paying a substantially higher percentage of the cost than he would have had there been a comparable intravenous drug.”

There is no oral oncology parity law in California, where Robert Adler received a diagnosis of multiple myeloma in 2006.

In 2009, his doctor recommended that Adler, now 55, begin using the oral anti-cancer drug Revlimid, which is recommended for multiple myeloma patients who have been through at least one other therapy.

When the pharmacist called to tell Adler his plan had approved him for the drug, she asked how he wanted to handle the charge of $3,200. That amount would cover the 50 percent coinsurance he owed for the first three-week cycle of 21 pills, after which he would take a week off and then start the process all over again

Adler, who used to own a stationery store and has an individual policy, couldn’t believe it. “No, it must be $320,” he remembers saying. Adler’s out-of-pocket costs, after 13 cycles of the drug, were $42,000. Family members helped pay.

Under an oral oncology parity law, his situation would probably have been quite different. The out-of-pocket maximum for the medical benefit part of his policy is $3,500. “It would have cost me $3,500 for the whole year instead of $3,000 for one month.”

Adler’s situation isn’t unusual, says Arin Assero, director of advocacy for the International Myeloma Foundation. “Multiple myeloma is a relapsing-and-remitting disease,” she says. “At some point patients are going to have to access” all types of treatment.

Higher cost-sharing for oral anti-cancer drugs drives some patients to walk away from the pharmacy counter. In an analysis of more than 10,000 pharmacy claims for oral anti-cancer drugs, 25 percent of patients didn’t fill their initial prescriptions if the co-payment amount was more than $500. Six percent of patients with cost-sharing of $100 or less failed to fill their initial prescription, according to the study.

Such a high rate of failure to fill prescriptions is troubling, says Dan Mendelson, chief executive of Avalere Health, the research and consulting firm that conducted the study. “It speaks to the broader issue of what is a health benefit and what should a patient be able to expect when they enroll,” he says. “It brings into question the whole concept of risk-sharing.”

For their part, insurers don’t want to be dictated to. “We’ve been pretty consistent in opposing mandated benefits,” says Susan Pisano, a spokeswoman for America’s Health Insurance Plans, a trade group. Helen Darling, president of the National Business Group on Health, says her organization, which represents large employers, opposes mandates as well.