CHARLOTTESVILLE, Va. — Mario Oikonomides credits a massive heart attack when he was 38 for sparking his love of exercise, which he says helped keep him out of the hospital for decades after.

While recovering, he did something that only a small percentage of patients do: He signed up for a medically supervised cardiac rehabilitation program where he learned about exercise, diet and prescription drugs.

“I had never exercised before,” said Oikonomides, 69, who says he enjoyed it so much he stayed active after finishing the program.

Despite evidence showing such programs substantially cut the risk of dying from another cardiac problem, improve quality of life and lower costs, fewer than one-third of patients whose conditions qualify for the rehab actually participate. Various studies show women and minorities, especially African Americans, have the lowest participation rates.

“Frankly, I’m a little discouraged by the lack of attention,” said Brian Contos, who has studied the programs for the Advisory Board, a consulting firm used by hospitals and other medical providers.

Now, though, advocates say cardiac rehab may gain traction, partly because the federal health care law puts hospitals on a financial hook for penalties if patients are readmitted after cardiac problems. Studies have shown that patients’ participation in cardiac rehab cut hospital readmissions by nearly a third and saved money.

The law also creates incentives for hospitals, physicians and other medical providers to work together to better coordinate care.

Oikonomides, who lives in Charlottesville, went for three decades without another heart attack after his first, but recently had bypass surgery because of blockages in his heart.

He is again rebuilding his strength at the University of Virginia Health System. “I attribute my 30 good years of life to cardiac rehab,” he said recently while pedaling on a stationary bike in a light-filled gym at one of the university’s outpatient medical centers, a heart monitor strapped to his chest.

But many patients still face hurdles.

Uninsured patients simply can’t afford cardiac rehab. And for those with some form of coverage, “the No. 1 barrier is the cost of the copayment, which is frustrating,” said Dr. Ellen Keeley, a cardiologist at UVA, who strongly encourages her patients to enroll.

Medicare and most private insurers generally cover cardiac rehab for patients who have had heart attacks, coronary bypass surgery, stents, heart failure and several other conditions. Most coverage is two or three hour-long visits per week, up to 36 sessions.

Insured patients usually must make a per visit copay to participate. For regular Medicare members, that runs about $20 a session, although many have private supplemental insurance that covers that cost. For patients with job-based insurance — and enrollees in the alternative to traditional Medicare called Medicare Advantage — out-of-pocket costs can range from nothing per session to more than $60 a pop.

“Some insurers say a copay for a specialty visit is $50, whether that means going to a neurosurgeon once in their life or whether that’s three times a week for cardiac rehab,” said Pat Comoss, a consultant in Harrisburg, Pa., who trains nurses to work in these programs. 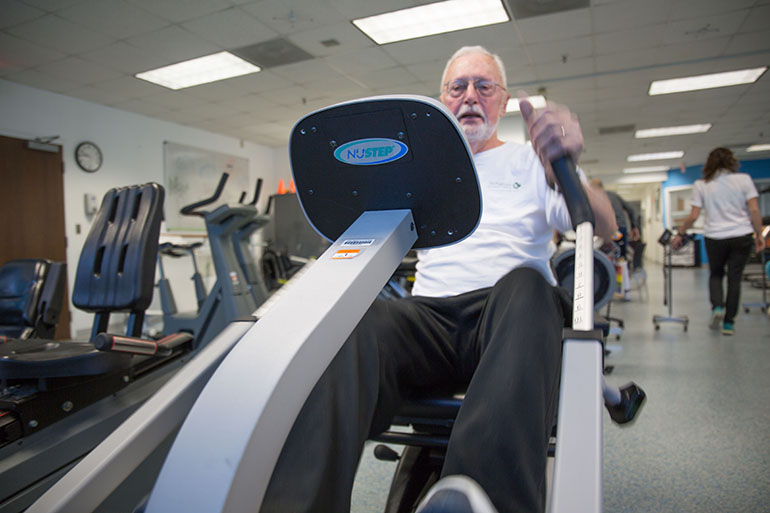 More than a year ago, federal Medicare officials met with insurers after advocates voiced their concern that higher copays were keeping patients from cardiac rehab, said Karen Lui, a legislative analyst for the American Association of Cardiovascular and Pulmonary Rehabilitation, the profession’s trade group.

“To their credit, they dug in and talked with plans that had much higher copays, such as $100 per session,” said Lui. Medicare officials told insurers that a $50 copay per session is the upper limit a plan should charge,” he added.

UnitedHealth, with nearly 3 million members in Medicare Advantage plans, said patient payments for cardiac rehab vary widely. About 12 percent of members pay nothing, while 23 percent pay $50 a session. Another large insurer, Humana, has a similar range, with copays running up to $60 a session.

Nationally, the weighted average payment now for Medicare members in private plans is just a bit more than the $20 that patients in traditional Medicare pay, said Dale Summers, director of the Center for Medicare & Medicaid Services’ division of finance and benefits.

Preventing The Next Heart Attack

Aside from cost, another big reasons so few patients participate is many are never referred to a program. Some hospitals are addressing this disconnect by building automatic referrals into their discharge system.

Patients may be reluctant to attend cardiac rehab, especially if they had not been physically active before their heart problem.

To counter that, Gary Balady, director of preventive cardiology at Boston Medical Center stresses its importance with his patients. He tells them that about 15 percent of heart attack patients may experience another one within a year.

“One of first things we say [in cardiac rehab] is we are here today to work together to prevent the next heart attack,” he said.

At the University of Virginia medical center, heart attack patients are given an appointment to come back to a special clinic within 10 days of discharge. Over the course of about an hour, patients meet with an exercise physiologist, a cardiologist, a nutritionist and a pharmacist — and all in the same exam room.

At the visit, the medical professionals answer questions, go over the patient’s medications, make diet tips and recommend cardiac rehab. Kathryn Ward, manager of UVA’s cardiology clinics, says up to 100 patients a month were referred to the clinic in its first year. Of those, 71 percent enroll, she said, well over the national average.

Still, patients face other barriers to this kind of care, including time constraints, or having to travel long distances to the nearest program.

And existing programs aren’t enough to accommodate all patients who are eligible. A recent study in the Journal of Cardiopulmonary Rehabilitation and Prevention surveyed 812 existing cardiac rehab programs in the U.S., finding that even if they were expanded modestly and operated at capacity, they could still only serve 47 percent of qualifying patients.

“We have patients who are an hour away from any cardiac facility and they can’t afford the gas money or the time,” said UVA cardiologist Keeley. 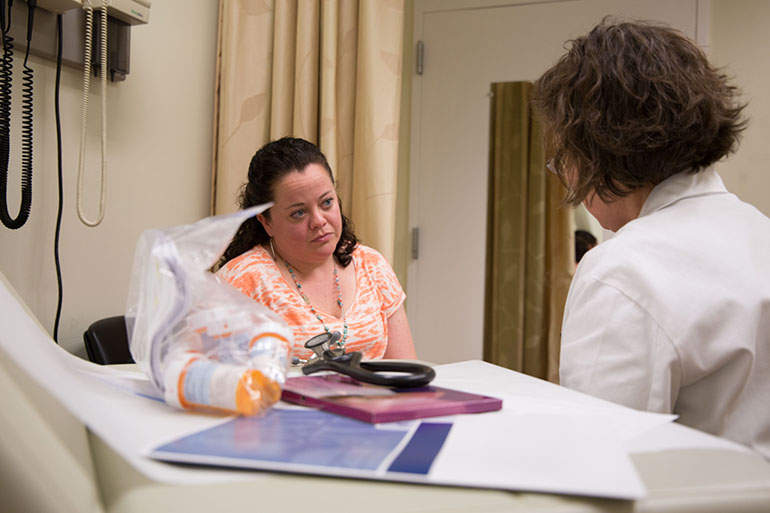 Take Kathryn Shiflett of Culpeper, Va. At age 33, the last thing she expected was a heart attack.

But one night in late March, she felt pain in her arm — pain that spread to her jaw — and she felt nauseated. After tests at a local hospital, she was transferred by ambulance to UVA, where cardiologists opened a blocked artery in her heart.

Shiflett, a medical worker with two children, traveled back to UVA a week later for her clinic appointment, and was encouraged to participate in cardiac rehab.

Shiflett found the program appealing because she wants to be active and prevent a repeat of her heart attack. But she lives an hour away. In addition to the distance, she isn’t sure she can make any of the sessions. Cardiac rehab classes are during working hours. The latest starts at 3 p.m.

“I’m not sure I can get there by then,” Shiflett said.

One answer for patients like Shiflett could be a home-based program, which are less common, but drawing increased interest.

“There are a whole plethora of different ways to provide cardiac rehab outside traditional center model,” said Mark Vitcenda, senior clinical exercise physiologist at the University of Wisconsin Hospital and Clinics in Madison.

At his program, patients can start in a supervised program at a center for two or three sessions, then can choose whether to continue in a home-based model, with occasional visits to the center. About 30 to 40 percent of Wisconsin program patients choose the home-based option, he said, with most being younger, working patients with lower medical risk.

“If we can lower the barriers of transportation and cost, patients are able to be more involved,” he said.