This story is part of a partnership that includes Georgia Public Broadcasting, NPR and Kaiser Health News. It can be republished for free. (details)

Kevin Wiehrs is a nurse at a busy doctor’s office in Savannah, Ga. But instead of giving patients shots or taking blood pressure readings, his job is mostly talking with patients like Susan Johnson.

Johnson, 63, a retired restaurant cook who receives Medicare and Medicaid, has diabetes, and she already met with her doctor. Afterwards, Wiehrs spends another half hour with her, talking through her medication, exercise and diet. 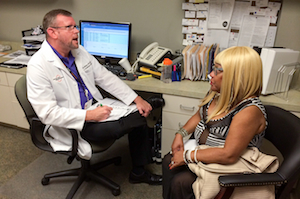 “So it sounds like you cut back on your sweets, things that have a lot of sugars in them — what about vegetables, your portions of food, have you made any changes with that?” he asks her.

Wierhs, 51, was a hospice nurse for 15 years and a social worker before that. Now, he is one of five new care coordinators at Memorial Health, a medical system based in Savannah.  He was hired to pay special attention to patients with poorly controlled chronic conditions like diabetes and heart disease.

“Some of these patients have fought with their diabetes for many years and get very complacent with the whole situation and feel that no matter what I do it’s not going to make a difference. But it does,” he says.

It’s hard to persuade people to change, Wiehrs says.  And patients are sometimes skeptical about his role in their care.  He says they often approach him and say, “I’ve been coming to this office before; I’ve seen these physicians. And now you’re somebody new. What are you doing, and why do you want to talk to me?”

Getting these patients to trust Wiehrs is an important part of the hospital’s strategy for dealing with rising costs. Memorial is investing $500,000 a year in care coordination, in the belief that the program will save money in the long run and improve the quality of care.

Memorial CEO Maggie Gill wants Wiehrs to teach patients to care for themselves.

“You can help people prevent crises from happening by helping manage them outside the hospital,” Gill explains.

She says Memorial provides about $30 million in free care each year. Because Georgia is not expanding Medicaid under the Affordable Care Act, Gill says the hospital is going to continue to give a lot of care for free to people who are low income and uninsured. On top of that, the federal government is penalizing hospitals if too many elderly patients with Medicare insurance have to be admitted repeatedly.  Wiehrs, Gill hopes, can prevent some of those repeat visits.

Gill recalls one Memorial care coordinator who had a particularly difficult diabetic patient.

On a typical day, Wiehrs meets with three or four patients and calls people who’ve just been released from the hospital.

Wiehrs says patients end up trusting him. He makes sure they’re feeling good, taking their medication and that they know when to come in for a follow-up. He gives them his direct phone number so they don’t have to hassle with the front office. For those who can’t afford their medications, Wiehrs says he’ll call drug companies or do research online to help find discount drug programs.

“Sometimes you have to get creative and you have to spend the extra time to see what might be available,” he says.  “That’s the benefit of me being a care coordinator and having the experience that I have. I know how to navigate the health care system.”

Wiehrs says he’s encouraged by the results he’s seeing already – like the patient who practically bounded into his office recently, breathing easier thanks to his new asthma inhalers.

The hope is that lots of little improvements like that will add up to big savings to the health system and healthier patients.