The Congressional Budget Office released a “compendium of budget options” Thursday to “help inform federal lawmakers about the implications of possible policy choices.” According to the document, it’s “one of several reports that CBO produces regularly for the House and Senate” and it “presents more than 100 options for altering federal spending and revenues.” Most are designed to reduce the deficit.

In his blog post about the report, CBO director Douglas Elmendorf briefly summarizes the report and lays out the challenges, emphasizing those related to mandatory spending. 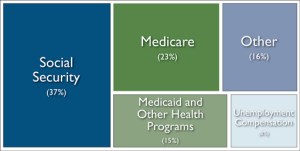 “The choices facing the 112th Congress come at a time when the federal government’s debt has increased dramatically in the past few years and when large annual budget deficits are projected to continue indefinitely under current laws or policies. Federal budget deficits will total $7 trillion over the next decade if current laws remain unchanged, CBO projects. If certain policies that are scheduled to expire under current law are extended instead, deficits may be much larger.

“The budget options presented in this volume do not constitute a comprehensive plan (although many of the options could be combined into broader plans) but rather a set of discrete policy actions that illustrate ways in which lawmakers could decrease federal spending or increase revenues. Also known as direct spending, mandatory spending accounts for more than half of federal outlays. The largest mandatory programs are Social Security, Medicare, and Medicaid, which together accounted for nearly three-quarters of mandatory spending in 2010 (see figure below). The Congress generally determines spending for mandatory programs by setting eligibility rules, benefit formulas, and other parameters rather than by appropriating specific amounts each year. Accordingly, to reduce such spending, policymakers might want to modify the automatic indexation of benefits, the populations entitled to benefits, or the federal government’s share of spending for certain programs.”

Many of the 100 options the report lays out concern health care spending, military and veterans’ health care, funding for the National Insitutes of Health and most prominently, Medicare and Medicaid. KHN has excerpted the health-care-related options, below.