Surprising some experts and giving President Barack Obama a potential boost eight weeks before Election Day, the number of people without health insurance fell for the first time since 2007, the Census Bureau said Wednesday. 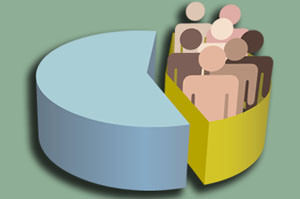 The closely-watched census report found that 48.6 million Americans were uninsured during all of 2011, compared to 49.9 million in 2010. The rate of uninsured dropped to 15.7 percent from 16.3 percent, the biggest percentage drop since 1999.

The good news on the uninsured comes a day after a report by the Kaiser Family Foundation found that employer health costs rose by a modest 4 percent this year. (KHN is an editorially independent program of the foundation.)

Census officials attributed the declining uninsured rate to two major factors: More people were enrolled in government programs such as Medicaid, the state-federal health insurance program for the poor; and the percent of people with private coverage did not decline for the first time in a decade.

The biggest drop in the uninsured was among people aged 19 to 25, for whom the rate fell from 29.8 percent in 2010 to 27.7 percent in 2011. It was the second consecutive year that that age group saw at least a 2 percent decline in its uninsured rate.

Health experts credit a provision in the federal health law which took effect in September 2010, which allows families to keep adult children on their health plans until age 26. The Obama administration said about 3 million people have gained coverage from this provision.

“I have no other explanation for that decline than the health law because the economy has not been particularly kind to that age group, and it’s not likely that they all got great jobs,” said Elise Gould, director of health policy research at the nonpartisan Economic Policy Institute.

Before the report’s release, health policy experts had been predicting the uninsured rate would increase slightly as the sluggish economy caused more people to lose workplace coverage.

David Johnson, chief of the Census Bureau’s Housing and Household Economic Statistics Division, said about 40 percent of the decline in the uninsured rate was among young adults. The drop is likely to be due to young adults being able to stay on their parents’ health policies, though the Census data did not measure this. Lower unemployment also may have played a role.

John Holahan, director of the health policy research center at the non-partisan Urban Institute, said it appears the federal health law has helped lower the number of people without insurance in two ways. In addition to letting children stay on parents’ health policies longer, the health law’s “maintenance of effort provision” has blocked states from making it harder to qualify for Medicaid.

He said the uninsured figures should give Obama a boost in talking about the impact of his health law, which Republicans have vowed to replace if GOP presidential nominee Mitt Romney is elected.

The law is projected to eventually reduce the number of uninsured by as many as 30 million. But its most significant coverage provisions— an expansion of Medicaid and the provision of federal subsidies to lower-income people to help them buy insurance— don’t begin until 2014.

On Sunday, Romney said on NBC’s Meet the Press that he likes some parts of the health law, including the provision allowing parents to keep their children on their health insurance plans up to age 26. But his campaign later clarified that he would not propose a “federal mandate” that insurance plans allow parents to keep children on their plans up to age 26, instead leaving it up to the private market.

The conservative Heritage Foundation said that despite the drop in the uninsured, the number of those without health insurance remains high. In a blog post, the group acknowledged the law had increased the number of young people with insurance. But it warned the provision could “cause employers to stop offering coverage, and will likely increase premiums.”

Republicans have blasted the health law as a “government takeover of health care” but census figures show nearly a third of the population already has government coverage.

The uninsured rate fell for whites and blacks and remained stable for Hispanics, the data show. People living in the Northeast saw the biggest declines in the rate of uninsurance, though all regions of the country except for the West, saw some drop.

The nation’s official poverty rate remained stable with 46.2 million people, or 15 percent of the population living in poverty. After three consecutive years of increases, neither the poverty rate nor the number of people in poverty was statistically different from 2010.

Mouse over the lines in the charts for greater detail