CHARLOTTESVILLE, Va. — When Garnett and Dave Mellen sent their 19-year-old daughter, Gita, off to college an hour away at Virginia Commonwealth University last fall, they didn’t expect to follow her.

But in November, the family received notice that its monthly health insurance premium in Charlottesville would triple for 2018, from $1,200 to an unaffordable $3,600.

So, the Mellens, both longtime local business owners, packed their bags and spent time with Gita in her off-campus apartment in Richmond.

“My whole life has been rearranged around trying to get health insurance,” Garnett Mellen, 56, said, as she explained that claiming residency with her daughter in the new ZIP code had cut their premiums by more than half.

Charlottesville now claims the dubious distinction of having the highest individual-market health insurance costs in the country — prompting families like the Mellens to look for extreme solutions.

An exodus of carriers, which was blamed on losses caused by the instability of the Obamacare marketplace, created a coverage vacuum, leaving locals and insurance regulators scrambling.

Only one carrier — Virginia Beach-based Optima Health — decided to continue to participate in the individual market, but it did so with monthly premium increases that were, on average, in the high double-digits and for some consumers as much as 300 percent, according to people interviewed for this story.

It’s a problem that’s likely to be replicated elsewhere, said Timothy Jost, an emeritus professor of law at Washington and Lee University in Virginia and expert on the health law.

“In many states, it’s going to be hard to maintain a functional individual market,” he said. “Charlottesville is sort of ahead of everybody else in this … but this is the direction things are heading.”

Insurers nationwide that intend to participate in the individual market face spring deadlines to file forms for 2019 plans and rate proposals. In Virginia, these dates are April 20 and May 4, respectively.

The situation in Charlottesville has left many residents at their wits’ end about how to pay for their health insurance, prompting the evolution of an angry and rebellious civic movement and thrusting the costs of coverage into the center of local politics.

Charlottesville for Reasonable Health Insurance, a grass-roots organization and Facebook group of more than 700 people, has already claimed small victories in the state legislature, such as propelling the passage of a bill that will alleviate the cost burden for some of its members.

But its highest priority has been pressing state regulators to explain and possibly reconsider the decision that allowed for the stunning premium increase.

In the midst of various bureaucratic fits and starts, the state Bureau of Insurance (BOI) responded to the group April 11 by reiterating that Optima’s rates were “actuarially justified.” Ian Dixon, one of the group’s organizers, said it plans to appeal this finding to the State Corporation Commission.

“We’re not going away, that’s for sure,” said Dixon. “They’re hoping they can wait us out. … They would drag this out for a year if they could.”

At the same time, the group has expanded its focus to other issues on health care costs, such as price transparency and regulatory reform. 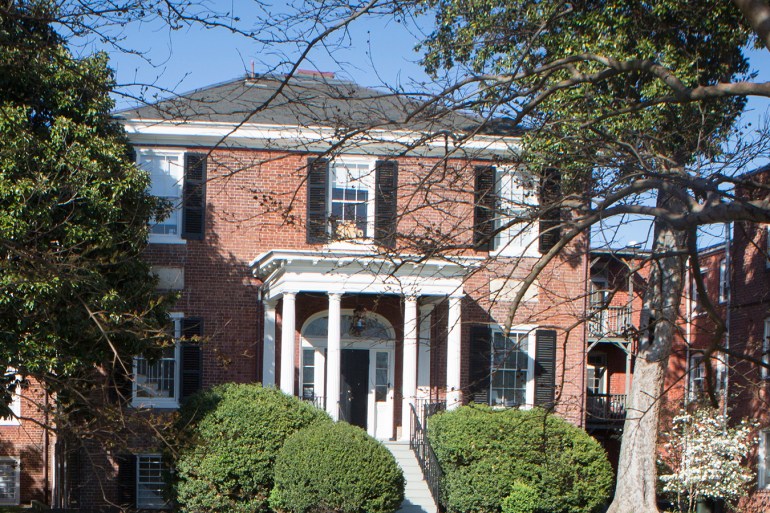 When the Mellens found out their monthly health insurance premium in Charlottesville would triple for 2018, from $1,200 to an unaffordable $3,600, they packed their bags and spent time with Gita in her off-campus apartment in Richmond. (Julia Rendleman for KHN) 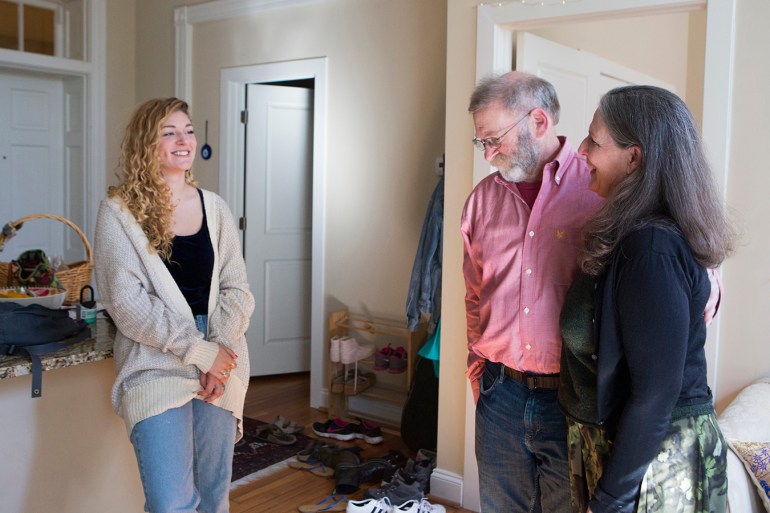 “My whole life has been rearranged around trying to get health insurance,” Garnett Mellen said. (Julia Rendleman for KHN)

How It Came To This

The trouble started in summer 2017, when the state’s major insurance carriers announced they would be leaving the individual market in Virginia, saying the market was “shrinking and deteriorating” — pointing to the instability of Obamacare under the Trump administration.

When Optima opted to continue to offer plans in and around Charlottesville, state insurance regulators breathed a collective sigh of relief.

But Optima’s decision came with updated rate increase proposals, which gained the OK of the under-the-gun BOI, led by Commissioner Scott White.

“I think the [regulators] decided they were willing to accept almost anything to get someone to cover Albemarle County and Charlottesville,” Jost said.

About 15 miles north of Charlottesville on U.S. 29, there’s a billboard that some residents now view with bitter irony. It features a smiling man with the message: “I chose Optima.”

On one hand, Optima did fill a void and offer health plans where no other insurer would. Still, many residents found their only choice came with a 300 percent boost in premium costs. They felt that state regulators had fallen short of their consumer-protection responsibilities.

“Any assumption that I had … that I thought [the Bureau of Insurance would be] protecting the people … was completely naive,” said Sarah Stovall, 40, who works for a small software company, lives in Charlottesville with her husband and two sons and has struggled to find affordable coverage.

But Ken Schrad, the director of the Division of Information Resources for the State Corporation Commission, said the bureau is still questioning Optima, checking its math and evaluating its actuarial decisions.

He couldn’t answer specific questions about a matter he said is pending.

Schrad said the bureau reached out to carriers and worked with them last summer when it was clear that much of the commonwealth wouldn’t be covered.

“It wasn’t a question of what the premiums would be,” Schrad said. “It was whether there would be any coverage.

“[Filings] must be based on actuarially sound decisions, and that’s all the bureau can review. The market is the market.”

A Movement Is Born

Stovall, 40, teamed up with Dixon, 38, a web app developer, to manage the emerging Facebook group, which was originally set up as a support system for people in search of new insurance options in a short window of time. Soon, Karl Quist, 46, who had been actively calling the BOI to lodge complaints, joined the effort.

“The three of us did not know each other before November,” Dixon said. “We feel like we’re relatives now.”

Others quickly piled on, including the Mellens and Gail Williamson, 64, a part-time secretary at a private school who needed insurance for herself and her husband, who owns a business restoring antiques.

Like many of the people in the group, the Williamsons made too much money to qualify for federal subsidies, but too little to be able to afford the $3,725 monthly premium that Optima would have charged them.

Sharing their knowledge, many Charlottesville for Reasonable Health Insurance members have resorted to imperfect jury-rigged policies that do not come with many of the coverage guarantees that protect patients from unexpected costs under the Affordable Care Act.

Instead of paying $2,920 a month for Optima’s least generous family health plan, Quist is saving $2,300 a month by purchasing two non-ACA-compliant plans, one for sickness and one for accidents.

Williamson has settled on a “silly little” three-month policy for $1,400 per month, plus an extra $35 a month in supplemental accident insurance for her husband.

“If I won the lottery, the first thing I’d do before giving my kids any money would be to buy health insurance for everyone in that group,” Williamson said.

Washington and Lee’s Jost said he worries about the impact of such cobbled-together coverage.

He said having these plans could damage the ACA market further by skimming the healthier people away from the more comprehensive coverage, leaving behind those who are ill or have chronic conditions. 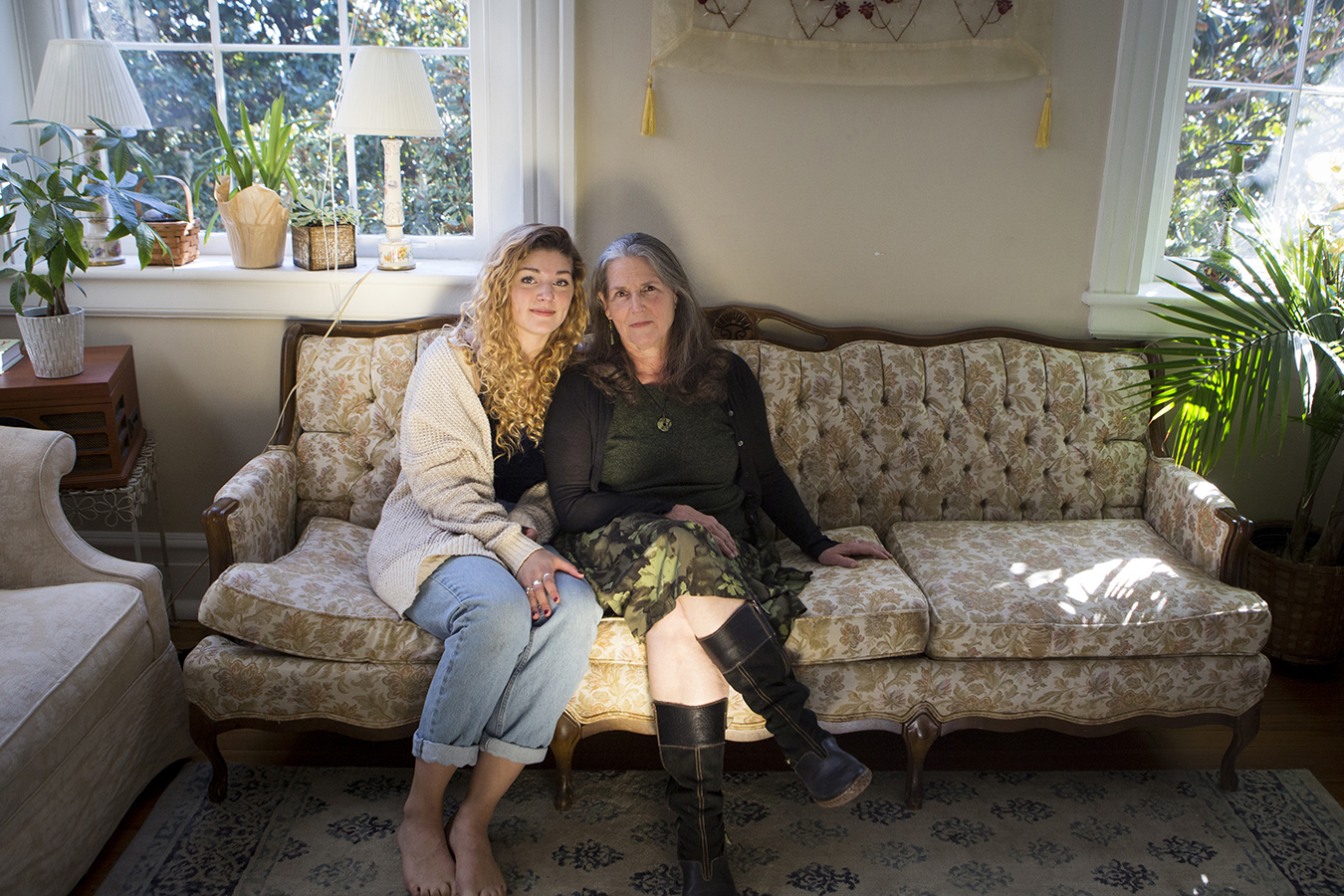 Over the past months, the community-based effort has evolved beyond being an ad hoc information clearinghouse into a powerful organizing tool.

For instance, it has raised almost $20,000 to hire lawyer Jay Angoff, a former federal and state insurance official, to appeal to Optima and state regulators about the Charlottesville-area rates.

Dixon, Stovall and Quist also regularly pile into Stovall’s minivan, drive to Richmond and become lobbyists for their cause.

“The insurance companies pay people very good money to lobby for them on a regular basis,” Stovall said. “Meanwhile, I have to take off work, Ian [Dixon] has to leave his business for a day.”

“On some level, I have faith that if we keep pushing, I don’t know what the eventual outcome will be, but we’ll find some type of justice,” Dixon added.

Their greatest victory came with the passage of SB 672. This law redefined what a “small employer” is so that self-employed people can buy insurance in the small-group market.

The group sought this change because many people, including Dixon, found that the cost of adding an employee to a company of one allowed them to save money by obtaining insurance as a small group, though it still added significant overhead costs to these businesses.

Many in the group see this success as only a band-aid fix. Though it allows some people to obtain cheaper insurance, it doesn’t address the root of the problem: Optima’s rate increases.

For Garnett Mellen, though, the issue seems resolved, at least for now. She found a job with health benefits in Charlottesville, which enabled her and her husband to move back there.

It’s a big relief — both for her and for Gita, her college-aged daughter.

“She [was] not entirely happy with us being there,” Mellen said.