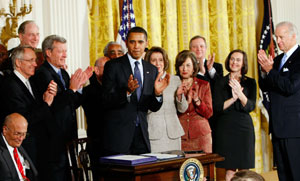 President Barack Obama signed CHIP reauthorization legislation in February that is expected to expand the program to an additional 6.5 million children through 2013

As Democratic leaders pursue their quest to provide millions of Americans with health care insurance, some advocates see an unlikely casualty of reform: youngsters now covered by the Children’s Health Insurance Program whom they fear could end up with reduced benefits.

About 7 million children are insured under CHIP, which provides coverage to children whose family incomes are too high to qualify for Medicaid, the state-federal program for the poor, but too low to afford private insurance. The benefits under CHIP include coverage for hospital and physician care as well as laboratory services and immunizations. Reauthorization legislation signed by President Barack Obama in February is expected to expand the program to an additional 6.5 million children through 2013.

The future of the children’s health program is one of many thorny issues facing lawmakers as they consider major changes to the nation’s $2.5 trillion health care system. Obama and congressional Democrats are hoping to pass a bill this year but face heavy opposition from Republicans.

As originally drafted, the House Democrats’ overhaul bill would have phased out the children’s health program by 2013 and continue their coverage through a health insurance “exchange,” or marketplace, that would feature private plans and perhaps a government-run public plan. The legislation didn’t include an explicit guarantee that the children’s benefits would remain the same after the transfer. In addition, some advocates feared the benefits offered through the exchange might include higher cost-sharing.

Groups such as the American Academy of Pediatrics and First Focus, a children’s advocacy organization, have urged lawmakers to make sure that children covered by Medicaid or CHIP don’t lose ground under health overhaul legislation. “Low-income people actually need stronger support because they don’t have the money to afford a lack of benefits and high out-of-pocket costs,” said Bruce Lesley, president of First Focus.

In a letter sent to Capitol Hill this month, more than 200 organizations urged tough safeguards to prevent any erosion in CHIP coverage. “Before moving children out of these successful programs, Congress should ensure that children will receive comparable or better benefits, cost-sharing protections and access to care under any new program,” they wrote.

But others say that such fears are misplaced and that CHIP funds would be better spent on private health insurance for eligible children and their families. Dennis Smith, who ran the Medicaid program during President George W. Bush’s administration and is now a senior fellow in health care reform at the conservative Heritage Foundation, said the money the federal government spends on CHIP could help finance family coverage. “Moving healthy lives and funding back into the market will open up competition,” which will help reduce health care costs, he said.

In any case, two House committees last month made changes to the House bill that appeased some of the advocates’ concerns. One was that no CHIP enrollees could be moved to an insurance plan offered in the exchange until the secretary of Health and Human Services certified that the new coverage and cost-sharing was comparable to what they have in CHIP.

Another change would require that all children who receive health insurance through the exchange have access to Medicaid’s Early & Periodic Screening & Diagnostic Treatment Benefit or state programs that provide similar services, including screenings for vision, hearing and other medical problems that proponents say many low-income and children with special health needs must have but aren’t offered by private insurers.

The advocates’ efforts now are centered on the Senate Finance Committee, where a bipartisan group of senators is trying to produce a compromise proposal. A policy options paper the panel released in May proposed moving children now covered by CHIP into the exchange for their health care coverage, but it is unclear if the benefits would remain the same.

“There’s a big concern that you will see a serious drop in what (benefits) kids are getting in the exchange in the Senate bill,” Lesley said.

A Finance Committee aide said that under the proposals the committee is considering “CHIP will not end” but rather be “reformed along with the rest of the health care system. These reforms will benefit kids in the CHIP program and their families” because they would receive tax credits to help make coverage affordable. In addition, families could choose the coverage they want among plans offered on the exchange.

Children who qualify for the CHIP program would get benefits in addition to those offered through an exchange plan, such as more frequent doctors’ visits, early screening and diagnostic exams, the aide said.

Some Finance Committee members oppose the idea of moving CHIP enrollees into private plans and fear it will result in inferior coverage. Sen. Jay Rockefeller, D-W.Va., said that “we should not experiment with the stable health care coverage children have today by exposing them to coverage in the exchange that may have higher cost-sharing for families and provide far fewer benefits for children.”

Much depends on the legislation’s level of benefits and subsidies to help low-income people purchase coverage, said Jocelyn Guyer, co-executive director of the Georgetown Center for Children and Families. “There could be some people who could be worse off under health reform and it may well be low-income children, which I think is very risky territory from both a policy and a political perspective.”

Some analysts suggested that many lawmakers, including Senate Finance Committee Chairman Max Baucus, D-Mont., who are longtime supporters of CHIP, want to protect the benefits that enrollees receive. “I think there’s going to be a lot of sensitivity about protecting these kids, and at the end of the day I think there will be protection of kids,” said Ron Pollack, executive director of Families USA.

It’s also highly doubtful, others say, that Democrats would pass a health care bill that would hurt children’s health care. “That seems implausible to me,” said Joseph Antos of the conservative American Enterprise Institute.