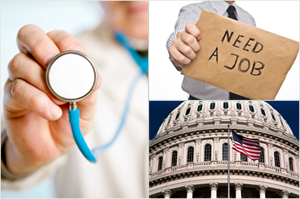 Democrats left Washington for the July 4 recess without passing key parts of their health care agenda.

Earlier this year, party leaders hoped to extend subsidies so newly laid off workers could afford health insurance under the COBRA program. And, with states hit hard by the recession, an extension of extra Medicaid funds also seemed likely. Also, while Congress passed legislation averting a 21 percent cut in Medicare payments to physicians, it was for just six months, instead of the two or more years many Democrats had envisioned.

But House and Senate leaders found themselves mired in a contentious debate, with conservative Democrats and Republicans opposing programs that could add to the deficit. Finally, both houses reached an accord on a short-term Medicare doctor payment fix. The Medicaid and COBRA subsidies are still in limbo.

Here’s an update on where these proposals stand:

Because they were convinced the money was imminent, 29 states set their budgets for the upcoming fiscal year counting on a continuation of the increased federal Medicaid matching rate. The funds were first approved as part of last year’s stimulus package, but will expire at the end of December. Until that time, the federal government will pay 61 to 84 percent of all Medicaid costs, depending on the state. The normal federal share ranges from 50 percent to 76 percent.

An effort to extend this assistance for six additional months was stripped from the House-passed jobs bill but later included in the Senate’s version. A compromise approach that would have extended funding but at a rate that phased out over six months was floated by the Democratic leadership last week in an unsuccessful effort to attract moderate votes. But the Senate failed to pass the measure three times.

Congress could revisit the issue the week of July 13 and governors say they must do so soon or states will have to start slashing budgets and laying off workers. “I think we were right to assume the extension,” said Pennsylvania Gov. Ed Rendell, a Democrat, who joined a bipartisan group of 10 governors at a June 30 press conference to urge congressional action. “But now that extension is in peril.”

Calif. Gov. Arnold Schwarzenegger, a Republican, said the federal government has mandated spending on Medicaid without the funds to keep the programs going. “The federal government cannot have it both ways,” he said. And Connecticut Gov. M. Jodi Rell, also a Republican, said states can’t tackle the Medicaid obligations on their own: “We absolutely need the assistance.”

Meanwhile, prospects for congressional approval of another extension of the COBRA subsidy — which provided newly laid-off workers with a 65 percent subsidy for the cost of remaining on their former employer’s health plan — are increasingly dim. The subsidy was first authorized in last year’s stimulus bill and has already been extended twice. However, the 15-month subsidy was not available after June 1. Laid off workers still have the ability to keep their former employer’s health insurance plan for up to 18 months, however, if they pay the entire cost of the premium.

An extension of the subsidy was included in House jobs bill but conservative Democrats and Republicans forced Democratic leaders to jettison it over cost concerns. The provision was never in the Senate bill.  Sens. Sherrod Brown, D-Ohio, and Bob Casey, D-Penn., want to reinstate the subsidy as an amendment to the bill if it again reaches the Senate floor. But since reconsideration of the bill seems unlikely, a spokeswoman for Brown said the senators, are pushing for the COBRA subsidy as a separate piece of legislation, and pay for it by eliminating a tax break. The proposal would, be retroactive, giving people laid off since June 1 six months of the federal subsidy instead of the 15 months that earlier law had provided.

Meanwhile, without congressional intervention, the National Employment Law Project estimates that 144,000 people each month would lose out on the subsidy.

With a June 1 deadline looming, the House passed a 19-month fix to the Medicare reimbursement system for doctors May 28. Senate Republicans raised stiff opposition to the cost of the package, despite its classification as “emergency spending.” After trying many legislative approaches without success, the “doc fix” was stripped from the larger jobs bill and the Senate passed a stand-alone bill to delay the scheduled 21 percent pay cut for doctors for six months. The House accepted the stand-alone bill, too.

The $6.5 billion bill, which was signed by President Barack Obama last week, will give doctors who see Medicare patients a 2.2 percent raise through November. The Centers for Medicare and Medicaid Services had been holding claims for doctors to avoid the scheduled pay cut, but by June 21 began processing claims with the pay cut. It’s unclear how many doctors will resubmit their claims to get the pay raise instead of the pay cut.