HILLSBORO, Ore. — Peter Cady, who works 12-hour shifts on his feet at Intel’s plant here, occasionally suffers severe lower back spasms. But he nearly gave up seeking medical help because in the weeks it took to get a doctor’s appointment and a referral to physical therapy, the pain usually subsided. 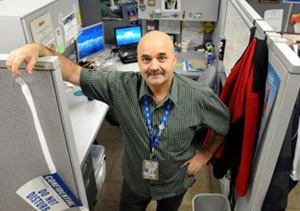 Peter Cady and other patients with back pain can see a physical therapist within 48 hours, rather than having to wait weeks for a doctor. (Photo by Steve Dykes for USA TODAY)

These days, however, Cady is much happier with his care.

Rather than waiting to see a doctor, Cady and other patients with routine back pain now see a physical therapist within 48 hours of calling, compared with about 19 days previously, Intel says. They complete their treatment in 21 days, compared with 52 days in the past. The cost per patient has dropped 10 percent to 30 percent due to fewer unnecessary doctor visits and diagnostic imaging tests. And patients are more satisfied and return to work faster.

“It’s a real bureaucracy buster that gets you right straight to someone who can take care of the problem,” says Cady, 47. “Before, the doctor wasn’t helping me or explaining anything. But the physical therapist educated me, gave me stretches and exercises to do, and cleared it up.”

The change came about through an unusual collaboration between Intel, two local health care systems, and a health insurer. Based on that success, the partners have developed similar improvements for hip, knee, shoulder and headache treatment. Intel and its partners say the result has been $2 million in administrative savings this year, from reduced costs for patient scheduling and registration, for example.

The Hillsboro collaboration is one of a small but growing number of voluntary partnerships around the country to tackle the twin problems of unsatisfactory quality and rising health-care costs. Similar programs are underway in Atlantic City, N.J.; Lewiston, Maine; Muskegon, Mich.; Sacramento, Calif.; San Francisco and Seattle. One is budding in Orlando.

All the efforts draw on quality improvement models developed in manufacturing and other industries. Physicians and hospitals share cost savings with the employers and insurers, and in some cases share losses if savings targets aren’t met. Medicare has launched a similar program under the 2010 health reform law aimed at developing so-called accountable care organizations.

Experts say employers, hospitals, physicians and health plans increasingly are willing to work together because cost and quality problems have reached crisis levels. The goal is to carve out health-care spending that’s wasteful and doesn’t help patients. Sometimes there’s an implicit threat that if a provider or health plan doesn’t participate, the large employer will buy health care from someone else.

“It all starts when leaders in a community say the current system is not sustainable and we’ve got to find a different model,” says Joe Damore, a vice president at Premier, a national alliance of 200 health systems focused on performance improvement. “Major employers are jumping on board because they see it as an opportunity to improve their employees’ health and reduce costs.”

Intel asked Providence Health & Services, Tuality Healthcare and Cigna to collaborate in 2009 because its employee health costs were rising by more than 10 percent a year, with costs projected to hit $1 billion companywide. The Oregon Public Employees’ Benefit Board recently joined the effort, having its members participate in the redesigned Providence and Tuality care models, sharing its data with the collaborative, and working with the partners to come up with new ways of improving quality and reducing costs.

“Health care was the only area where we weren’t setting standards and managing our suppliers,” says Patricia McDonald, an Intel vice president who spearheaded the project. “Our employees were waiting for care and the quality was questionable.”

In Atlantic City, Unite Here Health, a hotel workers’ union health plan, persuaded AtlantiCare, a local health care system, to open a special, jointly funded clinic in 2007 to provide intensive outpatient care to high-cost patients with chronic conditions such as diabetes, obesity and heart disease. The program, which the union is replicating in Las Vegas, achieved steep drops in patient smoking, blood pressure and diabetic blood sugar levels, according to AtlantiCare. By keeping patients healthier, it has reduced hospital admissions by 41 percent and emergency department visits by 48 percent.

Collaboratives help physicians and hospital leaders see employers and patients as customers whose expectations, such as rapid access to care, must be met. “I practiced for 30 years without knowing how long patients waited to see me,” says Dr. Robert Mecklenburg, who led the development of a collaborative effort at Virginia Mason Medical Center in Seattle, which started working with Starbucks and other employers in 2004. After meeting with employers, he adds, “you realize how important it is to see patients when they need to be seen. Any wait is not OK.”

There are still many obstacles to such partnerships. It’s often difficult to get traditional competitors and antagonists to collaborate, including sharing proprietary medical and financial data. Some employers are reluctant to get directly involved in how health care is delivered. Critics warn about rationing of care. And some physicians complain about interference with their professional autonomy, although Mecklenburg says most come around when they see better results for patients.

Perhaps the biggest roadblock is the predominant fee-for-service system, which pays providers to deliver more services, rather than better, more efficient care. Health-care payers, including private insurers and Medicare, have been slow to change their payment models to reward outcomes rather than volume of care. That sometimes puts providers in the position of losing revenue by doing the right thing for patients.

Dr. Donald Storey, who worked on the Seattle collaborative as an Aetna medical director and now is a vice president at Premera Blue Cross, blames insurers’ reluctance to change on their having many different contracts with employers and providers. In addition, not everyone wants a more efficient system. “One man’s waste is another man’s income,” he says.

Some insurers have embraced collaboration. In Sacramento, Blue Shield of California, Catholic Healthcare West and Hill Physicians Medical Group have worked with CalPERS, the state public employee benefit system, to redesign care after they identified quality problems and high costs for 42,000 plan members.

Redesigning care through a collaborative is “not easy to do. There’s a lot of investment of human resources, and we didn’t know if it would work or not,” says John Wray, senior vice president for managed care at Catholic Healthcare West. “But this was something we thought was important to try to learn from.”

It worked. Hospital length of stay and readmissions both declined 15 percent in 2010. That helped save more than $20 million, exceeding the $15.5 million target and allowing Blue Shield to keep CalPERS’ premiums flat in Sacramento for 2011. The remaining savings were split among the three partners, who would have lost money if the target hadn’t been hit.

Mecklenburg hopes this partnership model will spread widely across the country. “We are creating a marketplace based on quality, where employers can use their purchasing power to bring out the best in both providers and health plans,” he says. “But up to now it hasn’t usually worked that way.”

Collaborative Efforts Can Save Money And Improve Care