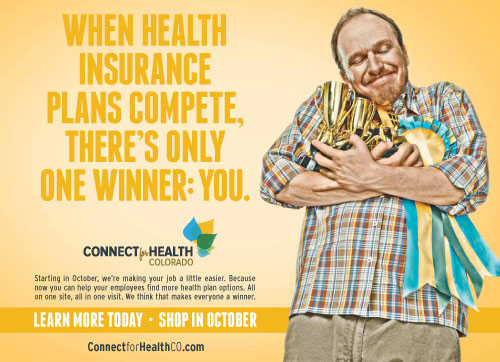 With less than five months until Colorado’s new online health insurance marketplace opens for business this fall, officials are concerned that few state residents have heard of it.

This week, it became the first state to launch a public awareness campaign with television, print, radio and billboard ads that will cost $2 million and run two months.  The TV ad shows a woman at her kitchen table scrolling through health plan information on the Connect for Health Colorado website. The voice over says the website lets people shop and buy a health plan online.

“When health care companies compete, there is only one winner: you,” says the voice over, as the woman jumps up and down as if celebrating a sports victory. The 30-second ad makes no mention that the new website is a result of the 2010 federal health law known to most Americans as Obamacare.

The Colorado marketplace, like others, will open for enrollment Oct. 1, selling coverage that will take effect next January. Colorado is one of 17 states approved by the Obama administration to operate its own online marketplace. Other states are relying in part or in whole on federally run marketplaces.

While Colorado is the first state to launch a marketing campaign this year, several others, including Oregon and Kentucky, plan to start next month.

Some officials have been hesistant to begin their marketing efforts too long before consumers can start shopping for coverage. Others want to start early because they believe that it will take a concerted effort to counteract the misinformation and lack of information.  Colorado officials say they plan to run additional ads closer to the marketplace’s opening date.

An April survey by the Kaiser Famly Foundation found four in ten Americans (42 percent) are unaware that the Affordable Care Act is still the law of the land — including 12 percent who believe the law has been repealed by Congress, 7 percent who believe it has been overturned by the Supreme Court and 23 percent who say they don’t know enough to say what the status of the law is.

Myung Oak Kim, director of communications and outreach for the Colorado exchange, said internal research showed just 10 percent of Coloradans were familiar with the marketplace. “We needed to get a wider awareness of our organization in a short amount of time to help prepare people for the changes that will be taking place,” she said.

The Colorado marketplace hopes to sign up about 136,000 people in the first year of operation.

The state has about 800,000 uninsured people and a total potential  base of 1 million consumers, including those who have small group or individual coverage today. About 500,000 residents are expected to be eligible for premium subsidies based on their income.

The exchange plans to spend at least $10.5 million to provide in person consumer assistance to help people sign up for coverage in the first year and may get additional money from private foundations. Funding for consumer assistance will vary widely by state, with states running their own marketplaces spending more money generally than those relying on the federal exchange.