Dale Miller spends his days on the streets of downtown Denver selling a newspaper called The Homeless Voice. He’s been having some health problems, but he can’t afford to see a doctor on the $10 to $15 a day he makes selling papers. 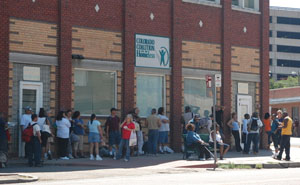 A local charity clinic recently helped him get a CAT scan at no cost to him. Miller fully understands, though, that someone has to pay for his care.

The state’s actually only paying for a small part of those bills. Colorado has an indigent care program that helps charity clinics and hospitals cover bills like Miller’s — but it only pays about ten cents on the dollar. That’s starting to change as Colorado is adding people to its rolls for Medicaid, the state and federal health program for the poor and disabled.

“It is historic. We’ve never done that in the past, so this is definitely a new foray for us, into this area,” says Colorado Medicaid Director Suzanne Brennan.

The state is one of just a few that is expanding Medicaid in advance of the major expansion called for in 2014 by the federal health law. Starting in mid-May, Colorado will begin offering Medicaid to adults like Miller who make less than $1,080 per year (that’s 10 percent of the federal poverty line, or $90 per month) – but there’s a catch. Though the state estimates that there are 50,000 people who meet the income bar, Colorado will only be able to offer the health coverage to 10,000 people. Those people will be chosen by a lottery method in each county, designed to distribute the benefits fairly across the state.

Like most states, Colorado has limited Medicaid enrollment, mainly covering poor kids, pregnant women, the disabled and some elderly. That’s because the federal government offers states a dollar-for-dollar match to help cover those populations, but nothing for adults without kids. So most states don’t cover them, no matter how poor they are.

But the Affordable Care Act has a provision that extends that federal match to help states cover adults who don’t have kids. Colorado is the seventh state to take advantage of it. The state has spent years crafting a way to come up with its share of the match.

Colorado hospitals volunteered to pay a new fee to state Medicaid, and that money pulls in the federal matching funds. That, in turn, allows the state to offer Medicaid to more people. It’s a win for the hospitals, because more people on Medicaid means fewer unpaid hospital bills.

But the combined funding still isn’t enough to cover all 144,000 adults in Colorado below the federal poverty level – which is $11,170 for a single person — even though Brennan says that was the original goal.

“We did research around the country to understand this population, and based on what we know are their needs, we reduced the number of people who would be eligible for this program,” she says.

They reduced it by a lot, capping enrollment for now at 10,000 people, that’s less than 10 percent of adults below the poverty line in Colorado. But the state expects the new Medicaid enrollees to rack up bills twice as high as the average Medicaid recipient.

It expects higher bills because poor people without insurance typically don’t go to the doctor as often as people with coverage. They may not see a doctor at all until their conditions become dire.

Dr. Marti Shulte treats a lot of people like that at the clinic run by the Colorado Coalition for the Homeless in Denver.

“The complications I see in a 45 year old, I might not have seen in private practice,” Shulte says. Complications include conditions “like amputations or foot ulcers from diabetes, or renal disease in a diabetic who’s 43 instead of what I might have seen in somebody who’s 60 or 65.”

Colorado, and the Obama administration, say that giving Medicaid to more people will mean they can avoid expensive complications like that, because it will cover primary care to help people stay healthy in the first place.

“The state can’t afford it, the economy can’t maintain it, and we’re just lying telling people we can cover everything we put on paper that we cover,” Mitchell says.

Democrats say America can afford the huge Medicaid expansion in the 2010 health law, and that it will actually save money long-term.

That’s if the Supreme Court doesn’t strike it down.