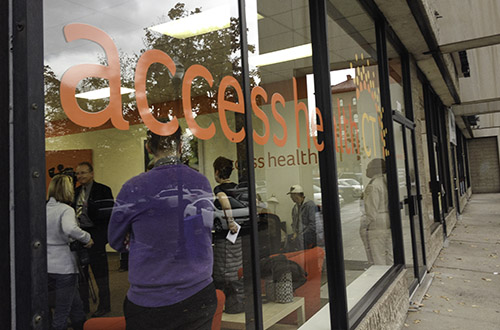 Gov. Dannel Malloy said the rollout of Obamacare in Connecticut has been a success — but it would be a bigger success if the federal health marketplace weren’t doing so badly.

“I hope that the federal folks get their act together in the remainder of the month, because I’m tired of sharing their bad news interrupting our good news,” Malloy said Thursday, speaking at the opening of a retail store for Access Health CT, the state’s marketplace.

Connecticut is one of the states that created its own health insurance marketplace under the Affordable Care Act.  The federal government is running the troubled healthcare.gov marketplace for 36 states.

Malloy said about 9,500 people have signed up so far in Connecticut. “We have people reaching out, wondering when the problem is going to be straightened out so that they can sign up,” he said, referring to people who had confused healthcare.gov with the state’s site.

The retail storefront is the only one of its kind in the nation, according to Access Health CT officials. It is in the heart of downtown New Britain, next to an Edible Arrangements store and across the street from a bank. Inside, it looks kind of like a bank, too.

The governor said it’s another way for the state’s uninsured to get coverage. The state has roughly 340,000 residents without health insurance.  His goal is to enroll around 100,000 or so in the first year, so he’s 10 percent of the way there. It’s a lot of people to reach in the next five months, but Malloy takes some satisfaction in Connecticut’s progress so far: “Do I follow the discussion on a federal level?  The answer is yes, I follow it.  Do I have a smile on my face while I follow it?  The answer is yes, I have a smile on my face, because I know we got it right.”

Conn. Governor To Feds: Get Your Act Together On Healthcare.gov