If you buy one of the less expensive insurance plans sold through the health law’s marketplaces, you may be in for a surprise. Some plans will not pay for a doctor visit before you meet your annual deductible, which could be thousands of dollars. 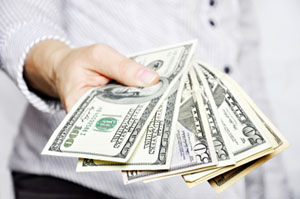 “This could be the next shoe to drop, as people don’t realize that if they’re buying a bronze plan, they may have to pay $5,000 out of pocket before it contributes a penny,” said Carl McDonald, senior analyst with Citi Investment Research, speaking at a Washington, D.C., conference last month.

Experts worry that some enrollees will be discouraged from seeing doctors if they have to pay the full charge, rather than simply a copayment.

Those who’ve bought their own insurance have always had to pay a set annual sum, called a deductible, before policies begin paying their claims.  But first-time insurance buyers may not realize they’re on the hook for additional costs before benefits kick in, and may choose a plan based solely on the monthly premiums.

Bronze and silver plans — which have lower monthly costs but typically, higher deductibles — are the most likely to require consumers to spend that amount themselves before the insurer pays any claims. There is no nationwide data on how many do that. But in seven major cities, half of bronze plans on average require policyholders meet the deductible before insurers help with the cost of a doctor visit, according to an analysis by eHealthinsurance.com, a private online marketplace, for Kaiser Health News. Patients in those plans who haven’t yet met their annual deductible would have to pay the full cost of the visit, unless it was for a preventive service mandated by the law. A typical office visit can run $65 to $85, while more complex visits can cost more.

Silver plans, which generally have higher monthly premiums, are more generous, with more than three-quarters paying for doctor visits before the deductible is met. The analysis included most or all of the plans available through the health law marketplaces in Atlanta, Philadelphia, Dallas, Tampa-St. Petersburg, Miami, Chicago and Phoenix.

Meeting the deductible before most coverage kicks in is common in the individual market, but differs sharply from job-based health insurance.  More than three-fourths of the insurance plans offered to Americans with coverage through their jobs pay a substantial chunk of the cost of doctor visits without the worker having to meet the annual deductible first, according to the annual survey of employers by the Kaiser Family Foundation. (KHN is an editorially independent program of the foundation.)

All Plans Must Cover Preventive Services

Under the law, Congress granted insurers leeway in how they design their plans, so long as bronze plans cover at least 60 percent of the costs of a typical policyholder, silver plans cover 70 percent, gold plans cover 80 percent and platinum plans cover 90 percent – with consumers on the hook for the remainder.  Gold and platinum plans were not included in the eHealth/KHN analysis because they generally cover more services with less cost-sharing by consumers.

All new plans must cover some defined preventive services with no copayment by the consumer and without having to meet the deductible first. Those include some vaccinations, mammograms and other cancer screenings, contraception, including birth control pills, and periodic physicals. But prevention services do not include treatment for an  illness, such as the flu. Charges could also apply if, during a preventive care visit, the patient is also treated for a medical condition or a minor injury. In addition to doctor visits and preventive care, some plans may also offer limited coverage for some prescription drugs.

So policyholders get some coverage simply by paying their monthly premiums. But “consumers need to look closely at plan design,” said Nancy Metcalf, senior program editor at Consumer Reports.  “If you have someone without a lot of money and they have a $4,000 or $6,000 deductible before anything [beyond preventive services] is covered, I have concerns about access to care.”

Sixty-four percent of bronze plans offered in Dallas, for example, require policyholders to meet the full deductible before insurance coverage kicks in, according to the eHealth/KHN analysis, which included all insurers except one, Molina Healthcare.  The average deductible in those plans was $5,400, according to the data provided to eHealth by insurers.

In Philadelphia, by contrast, 33 percent of bronze plans require policyholders to pay the deductible first, the smallest percentage among the cities studied.  The average bronze deductible there was $5,689.

Among silver plans, the analysis showed that far more provide some coverage before the deductible is paid.  Of 14 plans examined in Chicago, for example, only one required the deductible to be fully met before the consumer could see a primary care doctor for a small copayment.  All but one insurer, Land of Lincoln Mutual, were included in that analysis.

In Florida, 90 percent of silver plans offered in Tampa and 89 percent in Miami allowed coverage for at least some doctor visits before the deductible was met. In Florida, however, the database did not include one major insurer, Florida Blue, which has more than 18 plans in the Miami market alone.   Florida Blue did not respond to requests from KHN for information about which of its plans cover doctor visits before the deductible is met.

Cigna spokesman Joe Mondy said that the insurer sought to offer consumers a range of choices. Some of Cigna’s plans, for example, allow in-network visits with primary care doctors before the deductible is met, typically for a $30 to $45 copayment, while others do not.

“We structured the plans with the recognition that a lot of the new customers have never had a primary care or family doctor,” Mondy said. Plans that allow primary care visits for a small copayment are expected to foster doctor-patient relationships, he said.

Under the law, there are special provisions for lower-income Americans who purchase a silver plan but not a bronze plan.  People who earn less than 250 percent of the poverty level — about $28,700 for an individual — get extra help from the federal government in the form of lower copayments for doctor visits and smaller annual deductibles.  For the lowest-income residents, that can mean plans with little or no deductible and copayments as small as $3 for primary care doctor visits.

“Be very careful before you take a bronze plan over a silver plan” if you are in the subsidy-eligible income range, said Linda Blumberg, a senior fellow at the Urban Institute. Those earning less than twice the federal poverty level, about $23,000 a year for an individual, get the most help, with subsidies ratcheting down sharply after that.

Consumer advocates say shoppers should consider a wide range of plans — and not assume that the plan with the lowest monthly premium is the best for them.  Still, finding out about what services — other than preventive care — are covered before the deductible is met can take some digging.

Generally, any plan that can be linked with a “health savings account” — a way to put money aside tax-free to cover medical costs — will not cover much except preventive care before the deductible is met because of rules governing those accounts. For all other plans, consumers can check insurers’ websites for details or log onto healthcare.gov, the federal marketplace that covers residents of 36 states. A new feature added to healthcare.gov shows each policy’s monthly premium, annual deductible and the copayments required for doctor visits, drugs and emergency room care.

Plans that list a price for a doctor visit followed by the phrase “after the deductible is met” mean the consumer must pay the full deductible before getting doctor visits for a small copayment. Additional information can be found by clicking the “details” button and reading the summary of benefits. Consumers can also call insurers directly or look up the information under the policy name on an insurers’ website.

Consumers Beware: Not All Health Plans Cover A Doctor’s Visit Before The Deductible Is Met