Six in ten Americans, including Catholics, said they support a requirement by the Obama administration that health plans supply free contraceptives as a preventive benefit for women, according to the latest tracking poll by the Kaiser Family Foundation.

Women were divided, with 85 percent of Democrats and 67 percent of Independents supporting the requirement but only 42 percent of Republicans. Women across the political spectrum typically are closer together when it comes to supporting contraception rights.

“This is a time where the party attitudes about the role of government seemed to be a greater factor than necessarily being a woman,” said Mollyann Brodie, the foundation’s director of public opinion and survey research. 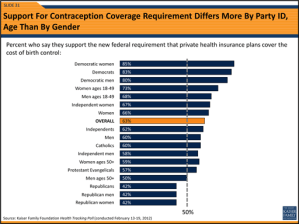 The poll also looked at how Americans are responding to recent Republican promises on Medicare. The latest proposals would convert Medicare from a program that provides a set of benefits regardless of the cost to one that gives beneficiaries a set amount of money. Seniors could use that money to buy either a private health plan or traditional fee-for-service Medicare.

Still, this nod to traditional Medicare has not persuaded the public. According to the poll, 70 percent of respondents and even 53 percent of Republicans said they wanted Medicare “as it is today, with the government guaranteeing seniors health insurance and making sure that everyone gets the same defined set of benefits.”

Overall, only 39 percent of Republicans said they thought Medicare should change to a premium support model that guaranteed seniors a fixed amount of money for health insurance, even if they could use it to buy traditional fee-for-service.

The poll calls into question whether Republicans will be able to count on the fee-for-service promise to provide them with political cover in November. House Republicans took heat last year when nearly every one of them voted for a premium support plan sponsored by Rep. Paul Ryan, R-Wis., that did not include the traditional Medicare option.

Still, said Drew Altman, president of the foundation, how candidates couch the fee-for-service promise could make a difference in campaigns. In the poll, various ways of wording the question – raising issues like the solvency of Medicare or the increased power of insurance companies — changed support for reform significantly.

“The debate will definitely be moved by arguments of both sides,” Altman said. “Public opinion on premium support buy-in starts off in a negative place, but is malleable and where it ends up depends on how the debate unfolds.”

Responses were mixed for other proposals to change Medicare:

Despite great public interest in the Medicare and contraception issues, the poll indicated that the economy is still the dominant voting issue at this time. But 23 percent of respondents said that they would only vote for a candidate who shared their views on Medicare.

And Democrats have gained some ground on Medicare with seniors in this poll. “Democrats have always had the advantage on Medicare, but they used to have the advantage with seniors as well,” said Brodie. In late 2010, however, Republican congressional candidates hammered their Democratic opponents by claiming that their vote for the health law cut $500 billion out of Medicare. (The Ryan budget that passed the House last year also proposed $500 billion in Medicare savings.)

Republicans won control of the House in that election, and polls showed that Democrats had lost the support of seniors on the issue of Medicare. In the new poll, 43 percent of seniors said they trusted Democrats more to handle Medicare, while 36 percent placed their trust in Republicans.