Betsy Gabay saw a rotating cast of at least 14 doctors when she was hospitalized at New York Hospital Queens for almost four weeks last year for a flare-up of ulcerative colitis. But the person she credits with saving her life is a spry, persistent 75-year-old with a vested interest — her mother. 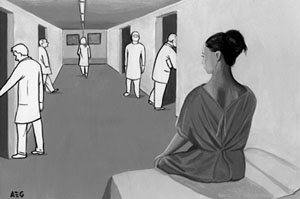 Alarmed by her daughter’s rapid deterioration and then by her abrupt discharge from the hospital, Gabay’s mother contacted a physician friend who got her daughter admitted to Mount Sinai Medical Center in Manhattan.

By then, Gabay, 50, had a blood clot in her lung and a serious bacterial infection, C. difficile. She also needed to have her diseased colon removed, according to the doctors at Mount Sinai. Had the problems been left unaddressed, any one of them might have killed her.

Coordinated care is touted as the key to better and more cost-effective care, and is being encouraged with financial rewards and penalties under the 2010 federal health care overhaul, as well as by private insurers. But experts say the communication failures that landed Gabay in a rehab center, rather than in surgery, remain disturbingly common.

Advocates for hospital patients and their families say confusion about who is managing a patient’s care — and lack of coordination among those caregivers — are endemic, contributing to the estimated 44,000 to 98,000 deaths from medical errors each year.

A landmark report by the Institute of Medicine in 1999 cited the fragmented health-care system and patients’ reliance on multiple providers as a leading cause of medical mistakes. Leape, who helped author that report, says there have been improvements since, but “we have not done enough.”

Subsequent studies suggest the toll may be even higher than the Institute of Medicine estimated. A 2010 federal report projected that 15,000 Medicare patients every month suffered such serious harm in the hospital that it contributed to their deaths.

Gabay experienced such shortcomings firsthand. During her 26 days in the Queens hospital, she said doctors would do rounds and “I couldn’t tell one name from the next. I didn’t know whether it was the gastroenterologist, or the nutritionist, or the physical therapist.”

When she was discharged to a rehab center, she was suffering from acute abdominal pain and bloody diarrhea, and was too weak to get out of bed. 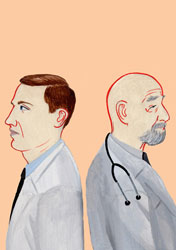 “I thought I was being sent there to die,” said Gabay, who made a complete recovery once she was treated at Mount Sinai for the infection and blood clot and her colon was removed. Officials at New York Hospital Queens declined numerous requests for comment, citing patient confidentiality.

A New Set Of Doctors

Patients such as Gabay are often surprised to discover that the primary-care physician with whom they have an ongoing relationship isn’t the doctor overseeing their hospital care and is unlikely to be informed about their progress.

Instead, hospitals have staff doctors called hospitalists who are supposed to manage a patient’s care, coordinating the various specialists, managing medications and then overseeing the transition back home.

“I see my job as an orchestra conductor pulling it all together,” said Robert M. Wachter, chief of hospital service at UCSF Medical Center in San Francisco, who coined the term “hospitalist” in 1996. “I may only spend a few minutes in the [patient’s] room, but the other subspecialists are communicating to me, and I’ll integrate it so we give the patient one uniform message.”

But that system is vulnerable to breakdowns. Patients and family members meet hospitalists, along with many other medical specialists, when they’re in crisis. Even when hospitalists explain their role, patients may be too overwhelmed – or ill, medicated, or disoriented — to absorb the information. As a result, they often don’t distinguish the hospitalist from the dozens of other caregivers they see.

“Unless the patient has written it down, they will say, ‘Someone was here, but I don’t remember what they said,'” said Ilene Corina, founder of PULSE, a nonprofit organization in New York that works to improve patient safety.

For families, the sense that no one is on top of their loved one’s care can be one of the most harrowing experiences related to a hospital admission.

Miscommunications are also more likely to occur under the strain of heavy workloads and the routine transfer of responsibility from one hospitalist to another during a patient’s stay. Hospitalists routinely work seven to 15 days in a row on shifts that each last 10 to 12 hours to provide patient continuity.

But many doctors report juggling too many patients to do their jobs well. Nearly four in 10 hospitalists responding to a survey from Johns Hopkins University School of Medicine said they struggle with unsafe workloads at least once a week. Almost a quarter believed their workload “likely contributed” to patient complications and even deaths. Most of them defined a safe workload as up to 15 patients per shift.

Workload issues are “the elephant in the room that cannot be ignored,” said Henry Michtalik, lead author of the journal article about the survey. “We have to find that balance between safety, quality and efficiency.”

Retired Washington D.C. internist Marsha Wallace had heard plenty of horror stories about hospital patients falling through the cracks. Still, she was troubled last fall during her own stay at a local hospital when she overheard doctors delivering entirely conflicting messages to the elderly cancer patient who was her roommate.

The caregivers didn’t appear to be talking to one another, Wallace said.

Sharon Flank, chief executive of an anti-counterfeiting company in Silver Spring, Md., saw her mother suffer from one complication after another following lung surgery: a bad reaction to a painkiller, a hernia that required surgery, a serious cardiac problem and a blood clot.

When Flank’s mother went back to the lung surgeon for a postoperative appointment, “she was in miserable shape because all these other horrible things had happened,” Flank said. “But her incision looked good, and the surgeon looks at her and says, ‘I did a beautiful job.’ ”

Patients are most vulnerable to coordination problems when their recovery doesn’t go as planned or a medical mistake has occurred, say advocates, patients and others.  That’s when complications — and potential liabilities – develop.

Karen Curtiss, a Lake Forest, Ill., writer, witnessed what she said were so many mistakes in her father’s hospital care that she founded an advocacy group, Campaign Zero, in response.

Shortly after Curtiss’s father had a lung transplant in 2005, he fell as he tried to make it from the bathroom to his bed without waiting for a nurse. Hospital staff put him in horizontal traction until a neurologist could examine him, even though that position can cause fluid to pool in the lungs. The fall occurred on a Friday, and the neurologist didn’t come until Sunday evening; by then, Curtiss’s father had developed pneumonia, which compromised the newly transplanted lung. Other complications followed, including a blood clot to his lung and a staph infection. He died soon afterward.

“His death certificate said he died of complications of pulmonary fibrosis,” said Curtiss, who has written a handbook for families with loved ones in the hospital. “I think it should have listed every single thing: the complications, the blood clot, a fall, infections, pneumonia.”

Although hospitals, the federal government, nonprofit groups and insurers want to improve the system, efforts to boost coordination and teamwork still have a long way to go.

Last summer, the Joint Commission, the nation’s hospital accrediting group, developed a tool for hospitals to help guide communication when a patient is transferred from one hospital setting to another – for instance, from an intensive care unit to a regular floor.

Some medical centers have taken steps to improve communication, assigning color-coded ID tags or scrubs to staff members so patients know who’s a nurse and who’s a doctor, and installing white boards in patient rooms, where a nurse starting a shift can jot down his or her name. At some facilities, hospitalists write their names on those boards, and hand patients and their relatives business cards or sticky notes with their photos.

A few hospitals have gone further. At the Mayo Clinic in Rochester, Minn., patients having surgery attend a pre-admission education class so they know “almost to the hour, let alone to the day, what’s going to happen,” said Chief Medical Officer Michael Rock.

In Pennsylvania, Geisinger Health System has developed a checklist on laminated cards that fit in caregivers’ pockets. It includes questions that doctors and nurses need to keep uppermost when reviewing cases, such as: “Is the patient taking high-risk medications? When is the patient going home? Does the patient have any catheters or lines that should come out?”

Virginia Mason Health System in Seattle completely overhauled how they did things after sending representatives to Japan to learn from Toyota. Now nurses spend 90 percent of their time near the patient “so the shift handoffs don’t happen at the nurses’ station anymore,” said Dr. Gary Kaplan, Virginia Mason’s chairman and CEO.  “Patients don’t have to use the call button.”

Consumer advocacy organizations, meanwhile, advise patients entering the hospital to have a relative or close friend, or even a hired hand, who can communicate on their behalf and be at their side through the hospitalization. [See sidebar.]

But not all patients have such advocates, and even when they do, playing that role can place a difficult burden on families or make second-class citizens of those who do not, said Wachter, the hospitalist.

When his own mother had lung surgery in Miami several months ago, “I went down there and didn’t leave her bedside,” he said.

Health Care’s ‘Dirty Little Secret’: No One May Be Coordinating Care