FONTANA, Calif. — There were no hugs, handshakes or high-fives Tuesday morning at Juniper Elementary School, where the student drop-off line had transformed into a school lunch drive-thru.

“Hi! How many?” asked school cafeteria manager Irene Huerta, 54, as she smiled and leaned toward an open car window.

Then she handed over three hot, bagged lunches (taquitos and vegetables) and a breakfast bundle for the next morning (muffins), each meal supplemented with fruit and milk.

“Thank you!” three car-bound kids yelled as their chauffeurs — haggard parents — rolled out of the parking lot and back home, a place that for many families has become a schoolhouse, day care center and holding pen since COVID-19 forced schools to close.

In less than two hours, Huerta and her colleagues handed meals to 329 children on this, the second day of their drive-thru service. By the end of the day Thursday, after four days of distributing meals, the district had given out 6,847 breakfast and lunch packages, the district said. 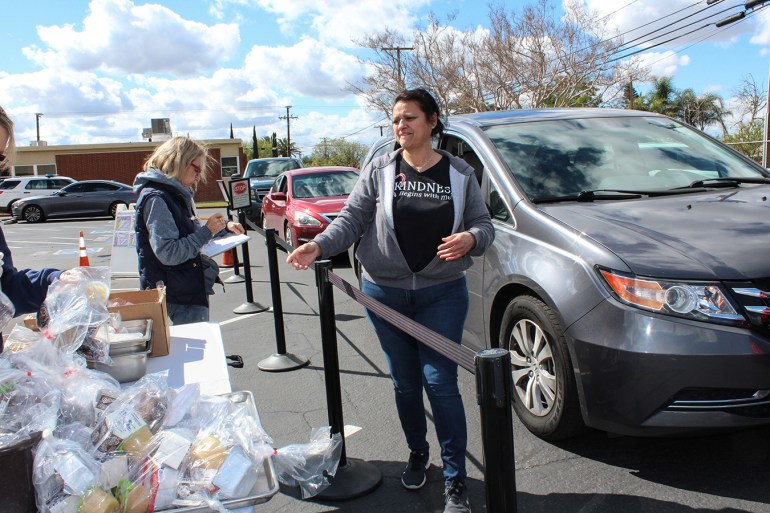 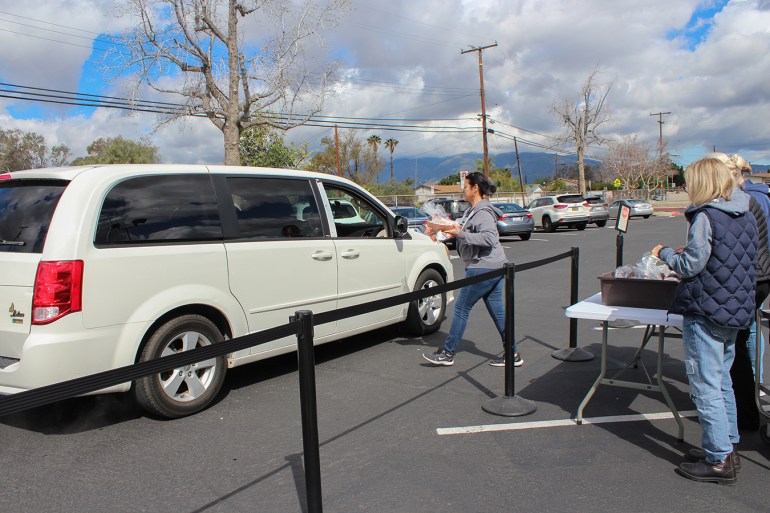 Huerta is in charge of the school’s grab-and-go meal program, which gives every child under 18 a free lunch and breakfast during school closures related to COVID-19. (Anna Almendrala/KHN)

About 99% of California schools have shuttered to try to stem the spread of the novel coronavirus, Gov. Gavin Newsom said. Most states have decided to close all of their public schools.

About 6.1 million children in California — among at least 44 million nationwide — are shut out of their classrooms. That means the most vulnerable students could lose the one place they rely on for a nutritious meal.

The uncertainty could last for months because schools could be closed the rest of the academic year, Newsom said.

In California, nearly 60% of children qualify for free or reduced-price meals from their schools, according to the state Department of Education.

“Food banks know firsthand that kids are hungriest when schools are closed, and that’s typically in the summer or during breaks,” said Andrew Cheyne, director of government affairs at the California Association of Food Banks.

It’s one more impact of the virus that has sickened at least 675 Californians and led to more than 15 deaths. Nationwide, there have been at least 14,250 cases and more than 200 deaths.

The U.S. Department of Agriculture is giving schools affected by COVID-19 closures more flexibility to continue providing meals without having to meet the federal requirement that students eat on-site. So far, California schools have submitted applications for more than 3,100 emergency lunch sites to the state Department of Education, said department spokesperson Jonathan Mendick.

At Fontana Unified School District in San Bernardino County, 84% of its 36,300 students qualify for free or reduced-price lunches. Because of the high level of need in the district, nearly all of its 44 schools allow all students to eat for free.

Ten schools are offering the grab-and-go programs from 11 a.m. to 12:30 p.m. on weekdays. The cafeteria and district workers staffing the drive-thrus receive their regular wages. 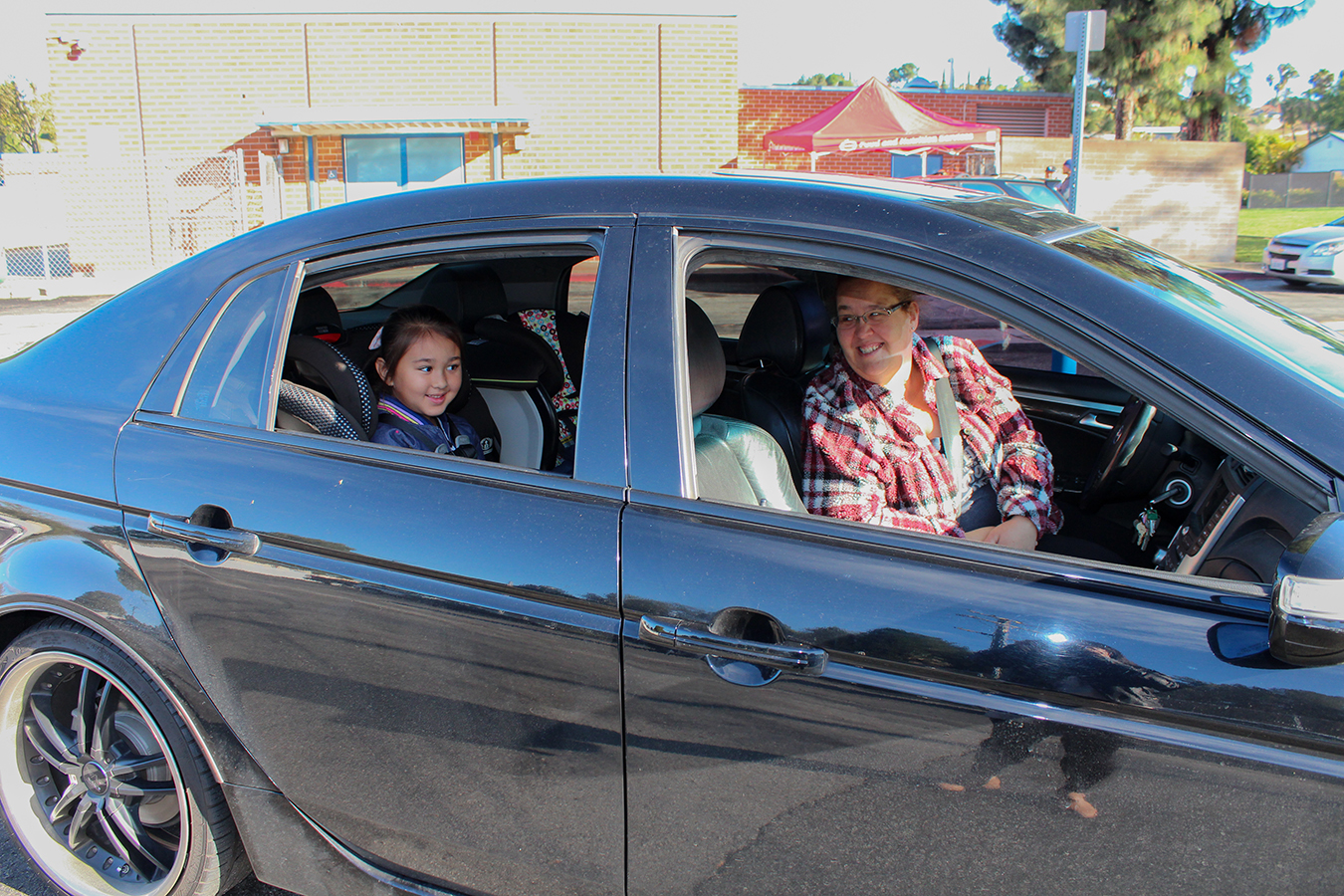 Dawn Reyes picks up a meal at Golden Springs Elementary School in Diamond Bar, California, for her 6-year-old daughter, Grace. Reyes’ husband is a server in a restaurant, and his hours have dropped sharply.(Anna Almendrala/KHN)

Cafeteria workers at the Juniper Elementary drive-thru Tuesday wore hairnets, aprons and gloves. Huerta, who was handing the food to families in their cars, was not wearing these items.

Marvella Melendez, 57, lives with her husband and three of her grandchildren around the corner from Juniper Elementary, while her daughter, son-in-law and their three children live in the guesthouse. She arrived Tuesday morning on foot, carrying an insulated shopping bag to pick up lunch and breakfast for her six grandchildren.

Melendez was hesitant to get meals the first day they were available, insisting to her grandkids that they had enough at home and should leave the meals for needier students. But, she said, the food is comforting and “means something to them.”

The food also helps the family save money at a time when they’re losing income, she said.

This helps us know that my kids are going to be fed today.

Melendez’s husband, a gardener, works outdoors and doesn’t enter people’s homes, so his work hasn’t been affected by the coronavirus, she said. But Melendez, who drives for Uber on weekends for extra money, has seen a huge drop in passengers since March 14. On a typical day, she logs about 25 rides, netting her $80 to $120, she said. But that weekend, she picked up only four trips a day, she said.

“Everybody’s scared to go out,” she said.

The virus and the ensuing shutdowns have also spurred some people to hoard, leading to empty supermarket shelves and stress for families trying to feed their kids.

The district has about 23,000 students and runs a free cafeteria program. It started its drive-thru service Tuesday and handed out 4,264 breakfast and lunch packages in the first three days, the district said.

“We needed to provide food, especially in light of what’s going on with food shortages in markets,” Fuentes said. “That was the No. 1, high-priority discussion for us.” 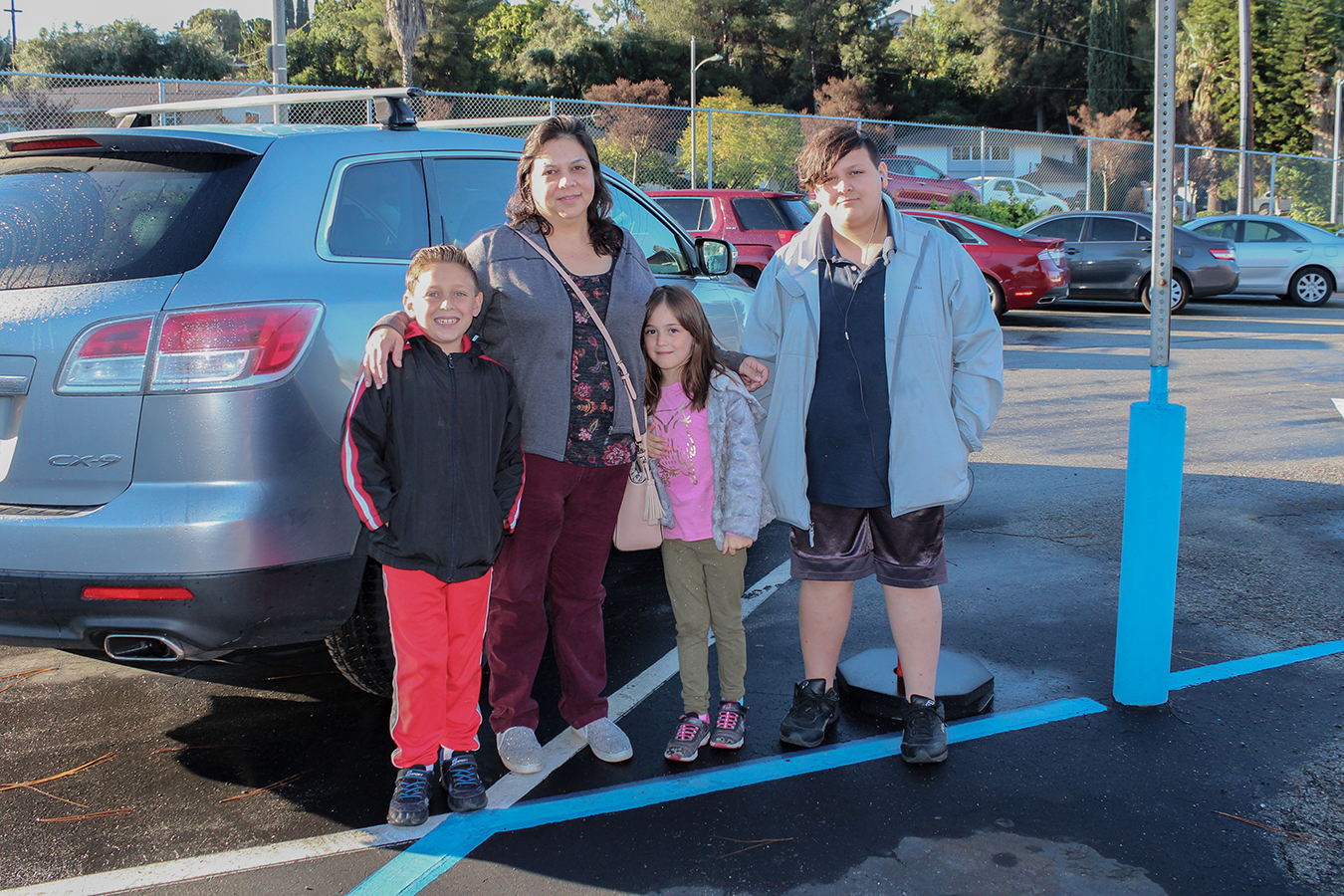 At Golden Springs Elementary, a Pomona Unified school in Diamond Bar, Andrea Carrillo pulled up for bagged lunches Tuesday with her three children, ages 12, 8 and 6. Carrillo, 41, an insurance auditor who works from home, said her family had just run out of groceries.

“This helps us know that my kids are going to be fed today,” Carrillo said.

Dawn Reyes, 48, pulled up for meals for her 6-year-old daughter, Grace. Reyes said she felt “panicked” when she first heard news of the school shutdown and rushed to prepare to home-school Grace in addition to caring for her 3-year-old daughter.

Reyes is a housewife, and her family relies primarily on her husband’s income as a server in a restaurant. Since last week, she said, his hours have dropped sharply.

“We do have savings, but you know, that will eventually get depleted,” she said.

Nearby supermarkets no longer regularly have milk, which her children drink every day. But she also appreciates the school drive-thru because it gives some structure to her children’s morning.

“It’s become part of our schooling routine,” Reyes said Thursday morning, after visiting the drive-thru three days straight. “It’s convenient, gets us a ride in the car, and it makes it easy for me not having to think about breakfast and lunch.”

Now On The Menu At Closed Schools: Drive-Thru Lunches