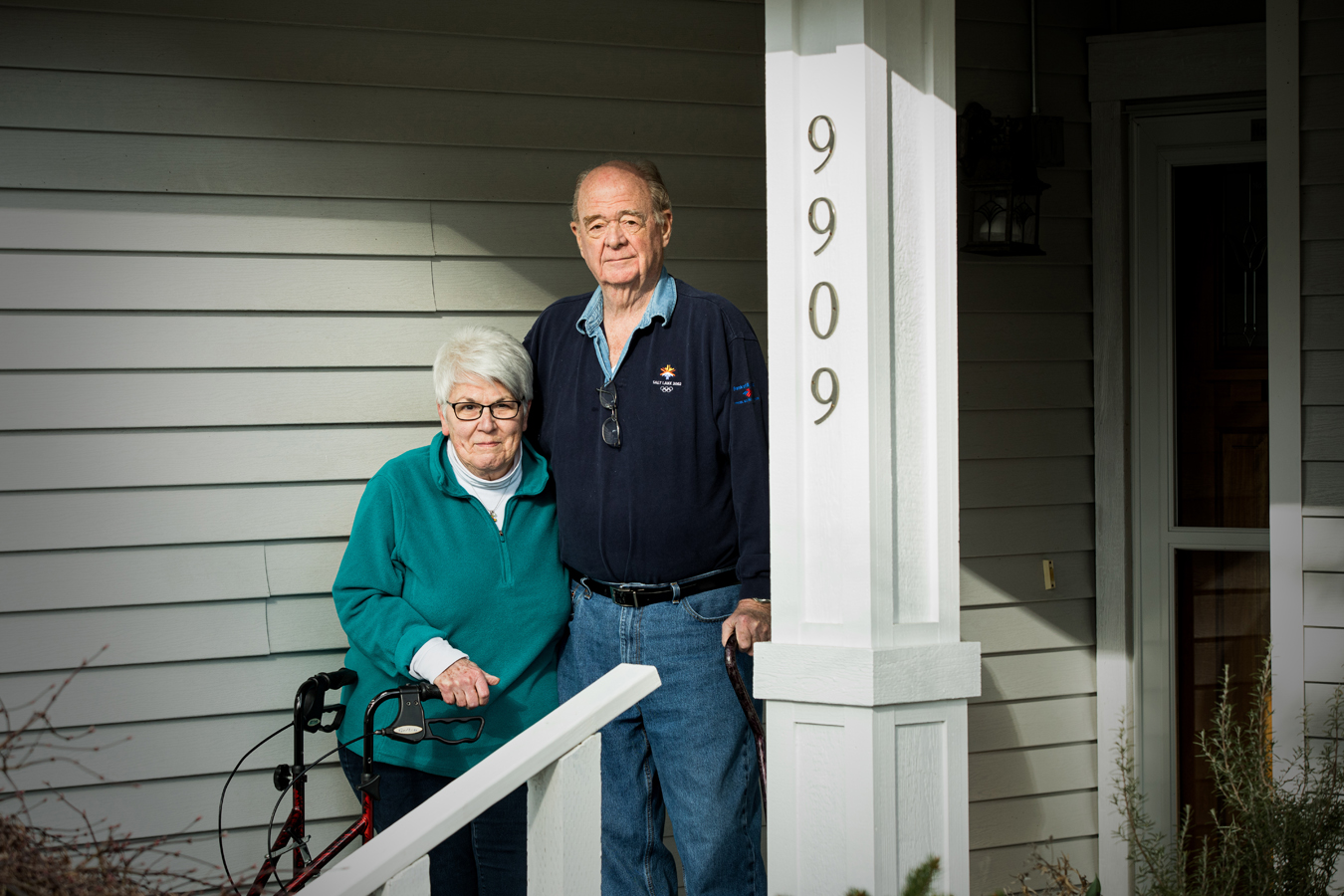 Josie and George Taylor stand on the porch of their home in Everett, Washington, on March 24. They are two of the first people in the U.S. to recover from novel coronavirus infections after joining a clinical trial for the antiviral drug remdesivir.(Dan DeLong for KHN)

For 10 days last month, they lay in side-by-side isolation units in a Seattle-area hospital, tethered to oxygen and struggling to breathe as the coronavirus ravaged their lungs.

After nearly 52 years of marriage, that was the hardest thing: being apart in this moment, too weak to care for each other, each alone with their anxiety and anguish.

“I worried about my husband a lot,” recalled Josie Taylor, 74, who fell ill a few days before George, 76. “Yes, I was concerned about me, but I was more concerned about what was going to happen to him.”

Despite their personal uncertainty, when a doctor approached the Taylors at their bedsides to ask if they would consent to join a study of an experimental drug to help experts learn to treat the devastating infection, each agreed.

“My answer was absolutely yes,” Josie said. “My feeling was anything I can do to help. Even if you’re stuck in an isolation room, this is affecting so many people and we have to do everything we can.”

In late March, the Taylors were discharged from EvergreenHealth medical center, heading home a few days apart. They returned to their tidy white house in Everett, tired, worn — and wondering if the clinical trial they had joined is the reason they survived the deadly disease.

The couple are among the first patients in the U.S. to recover from COVID-19 after agreeing to participate in a National Institutes of Health randomized controlled trial of remdesivir, an antiviral drug made by Gilead Sciences that once aimed to treat another infectious disease, Ebola.

The study is part of a surge in efforts to beat back the virus that as of Sunday evening had sickened more than 337,000 people in the U.S. and led to more than 9,600 known deaths.

“You pray that you got the drug,” said Josie. “The fact that we both recovered so quickly? You hope that’s the reason why.”

But neither the Taylors nor Dr. Diego Lopez de Castilla, the 41-year-old physician heading the trial at the Kirkland, Washington, hospital, know now whether the couple received injections of remdesivir — or an identical-looking placebo.

Nor do they know whether the investigational drug, designed to stop the virus from replicating, is effective at halting the disease. There are a half-dozen studies in progress across the globe testing remdesivir as a COVID-19 treatment.

At the same time, more than two dozen Phase 3 clinical trials are recruiting participants to study interventions to prevent or treat COVID-19. They range from a tuberculosis vaccine being tested on health care workers to a cancer drug that could prevent the deadly fluid buildup occurring in the lungs of COVID-19 patients.

Other drugs, including those used to treat rheumatoid arthritis and even gout are being tested to see if they reduce the body’s inflammatory response to the infection. A few studies aim to confirm whether treatments touted by President Donald Trump, the antimalarial drugs chloroquine and hydroxychloroquine, are indeed effective against COVID-19.

If any of the trials show overwhelming evidence of benefit or harm, they could be called off, with the drug in question accelerated to general use or halted.

So far, no drug appears to be a certain treatment for COVID-19. Early results regarding remdesivir are expected in late April. Officials with the World Health Organization and many media accounts have suggested the treatment could hold promise. But it’s too soon to say, said Lopez de Castilla.

“I don’t think we have enough data to be commenting,” Lopez de Castilla said. “I think it’s very premature. We’re still enrolling patients in the trial.”

Lopez de Castilla is steering clear of the political turmoil that has surrounded remdesivir and Gilead. The firm in March sought and received federal Food and Drug Administration approval for so-called orphan drug designation, but then asked the agency to rescind the designation after critics accused company officials of unfairly seeking a lucrative monopoly for the drug.

Orphan drug designation gives a manufacturer seven years of market exclusivity, a period that essentially bars competition. Consumer advocates criticized the designation because orphan drug status is aimed at products that target rare diseases, those that affect 200,000 people or fewer. Gilead received the status when U.S. cases were still hovering near 40,000 but were expected to rise far higher.

In the past two weeks, Gilead officials announced that, because of “overwhelming demand,” the company would no longer provide the drug on an individual compassionate-use basis to patients not enrolled in clinical trials and was shifting to a broader-access program.

For now, Lopez de Castilla is focused on the science, working to follow strict protocols set by the National Institute of Allergy and Infectious Diseases study expected to enroll 440 patients across 75 sites.

The double-blind trial calls for participants to receive the active drug or placebo for 10 days, and then to evaluate how they do based on a scale that moves from fully recovered to death. The drugs are given free to hospitals and trial patients. In a public letter March 28, Gilead chief executive Daniel O’Day pledged that the company would work to “ensure affordability and access.”

Since Feb. 21, 40 U.S. sites have joined the Adaptive COVID-19 Treatment Trial, with Lopez de Castilla’s team enrolling among the most patients so far: at least 20 as of April 1.

“We are a community hospital,” he said. “Although we don’t have all the resources that bigger hospitals have, we do have amazing people here.”

Still, it hasn’t been easy. For weeks, EvergreenHealth was at the epicenter of the U.S. outbreak, treating dozens of patients from the Life Care Center nursing home in Kirkland, where nearly 40 patients have died. Overall, the hospital has treated nearly 300 COVID-19 patients since Feb. 28.

The patients enrolled in the trial are among the sickest, Lopez de Castilla said. They’re those who are moderately to critically ill, including some who are unconscious and on ventilators. Obtaining consent to participate in a clinical trial from patients or families grappling with an emergency has been “very challenging,” he said.

“One of the challenges is how to enroll a patient who is already intubated,” he said. “We do this through a family member, someone who can make medical decisions for the patient.”

It can take hours to explain the procedure, describe the side effects — which could include gastrointestinal problems or elevated liver enzymes — and provide detailed information so the patient or their legal representative can make an informed decision.

Patients must understand that they could receive an unproven therapy, he said. And they need to know that, because the trial calls for half of the patients to receive the drug and half to receive a placebo, there’s a 50% chance they won’t actually receive the active drug.

One barrier has been that the trial paperwork is available only in English, which is not the first language of some patients. EvergreenHealth is working with the NIH to create at least one translation in Spanish.

Overall, about half of the patients Lopez de Castilla approached have said no. 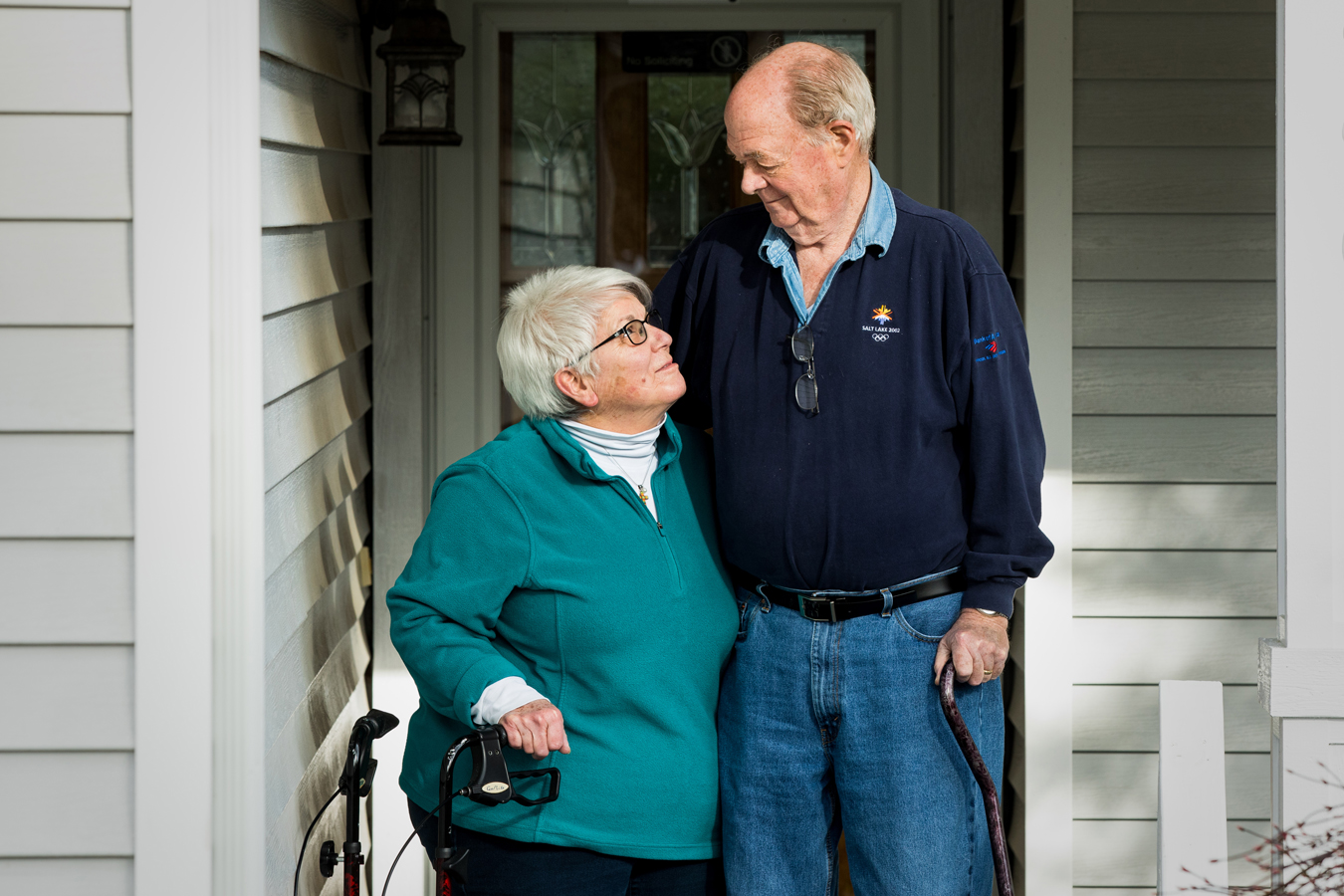 The Taylors both fell ill in early March and ended up in a Seattle-area hospital with COVID-19, before deciding to join a clinical trial for an experimental drug. For Josie Taylor, a former second-grade teacher who volunteers for social causes, the decision was easy. “It does have to be studied,” she says. “It can’t be a knee-jerk reaction of ‘Take any medication, without knowing what the results will be.’”(Dan DeLong for KHN)

For Josie Taylor, a former second-grade teacher who volunteers for social causes, the decision to join the trial was easy. “It does have to be studied,” she said. “It can’t be a knee-jerk reaction of ‘Take any medication, without knowing what the results will be.’”

She and her husband, a retired banker, fell ill in early March, just weeks after moving from their home of 40 years to a new community 30 miles north of Seattle. Josie got sick first.

“I went to the grocery store and came out, loaded the stuff in the car and realized I was very short of breath — weirdly so,” she recalled.

She ran a fever that night, called her doctor and went to the emergency room the next morning, where she was quickly placed in isolation.

George Taylor is a Vietnam War veteran who was affected by the defoliant Agent Orange used in that war. He has multiple health problems, including prostate cancer, heart disease and Parkinson’s disease. Within a couple of days, he also fell ill.

George was sent to the ER and then to an isolation room — next to his wife’s. For more than a week, they were both seriously ill, on oxygen, uncertain about the future. “It was 10 or 11 days,” Josie said, adding wryly: “Honestly, you lose track when you’re having fun.”

Contracting the novel coronavirus has been scary. But they were heartened by the support of family, friends, even people they barely knew. “I came home to a brand-new place with brand-new neighbors and our yard had been mowed and edged,” Josie said.

Now that they’re both home, the Taylors are gradually getting back to normal. Josie still speaks slowly, pausing to catch her breath between words. She said she hopes her experience underscores the seriousness of the crisis.