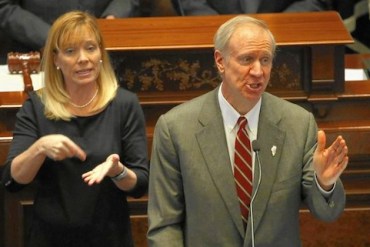 Gov. Bruce Rauner delivers an address on his budget proposal at the Capitol in Springfield on Feb. 18, 2015. (Photo by Abel Uribe/Chicago Tribune)

The proposed cuts would eliminate or reduce coverage of adult dental care, podiatry, renal dialysis and hemophilia and funding of some mental health rehabilitation facilities, according to a budget document and a Rauner budget official. The cuts would also reduce funding for hospitals by about $735 million, according to the Illinois Hospital Association.

Many of the targeted patient services were recently restored to the Medicaid program after being eliminated a few years ago to save money, Rauner noted in his budget address Wednesday. Legislators who support the services say eliminating them cost the state more in the long run.

“We found, for example, that if you cut people’s dental services and then they don’t go to a dentist, they end up going to an emergency room and it costs us more money,” Cullerton said. “So we went back and examined that and made a change.”

“People will not miraculously get better if they’re denied care for services,” said Rep. Greg Harris, D-Chicago. “They’ll just end up at a higher level of care in an acute care setting at the most expensive end of their disease.”

Other legislators responded that the added costs of emergency room services have not been well-documented.

The earlier service cuts were part of a 2012 Medicaid reform law called the Smart Act; it was later amended to roll back some of those changes.

The law instituted a process to determine how many people were on Medicaid who were not eligible to be. Rauner proposes saving $75 million by being more aggressive in determining eligibility and by adding new efforts to “detect and prevent fraudulent and abusive billing practices by providers,” according to the budget document.

“This is an old trick by a new governor,” to boot patients off Medicaid rolls, Otto said.
Medicaid’s budget for fiscal year 2015 is about $19.9 billion. Rauner’s proposal would cut spending to $18.6 billion for fiscal year 2016, a difference of $1.3 billion. The governor arrived at $1.47 billion in savings by including projected spending growth in programs he wants to eliminate, a spokesman said.

The proposed $735 million cut to hospital reimbursements comes at a time when 40 percent of Illinois hospitals are operating in the red, said A.J. Wilhelmi, the Illinois Hospital Association’s chief governmental relations officer.

“We think that that will set us back in transforming the health care delivery system and providing care to people in communities across the state,” Wilhelmi said.

Rauner’s changes begin with $200 million that hospitals pay in taxes. After a federal match, the hospitals currently get double that amount back, Wilhelmi said. Rauner would put the $200 million directly toward Medicaid costs and hospitals would lose out on the $400 million, according to the hospital association.

The remaining $335 million in cuts represents money the state reserved in reimbursements as it revamped a 20-year-old reimbursement system, the hospital association said. Hospitals were supposed to get the money back after the new system was in place, they said.

In recent years, the state added mental health drugs and anti-seizure drugs to the exceptions. If the state returns to the Smart Act’s original prescription language, it would be a “life-threatening” prospect for people with epilepsy, Olds Frey said.

Rep. Patti Bellock, R-Hinsdale, who sponsored the Smart Act, said she has supported some changes to the law but not others. She said she expects to delve more deeply into potential savings and costs as the legislature begins the budget process.

“He has put these things out there; I think they need legislative feedback on what can be done and what can’t be done,” she said.