Scores of opponents and supporters of the health care law rallied next to each other for over three hours Monday, before, during and after the Supreme Court hearing.

“Protect our care, protect our law,” yelled the law’s backers as they marched in a circle, some with shirts that read, “Death is not an option.” 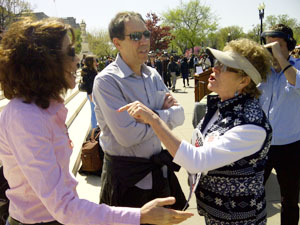 Linda Dupere (right), debates the merits of the health law with Jane, a Los Angeles teacher who would not give her last name (Photo by Phil Galewitz/KHN).

It was mostly civil.  One exception: Linda Dupere, 65, of Compton, N.H., an opponent of the law  and Jane, a teacher from Los Angeles who would not give her last name, yelled and pointed fingers at each other.

“Don’t you think you should support your fellow man,” Jane who supports the law, asked Dupere, who said people shouldn’t rely on the government for help. “Health care  needs to be tweaked not dismantled,” Dupere replied.

Supporters of the law seemed to have the upper hand outside the court — largely because the United Methodist Church next door was being used as a staging ground for left-leaning Families USA and the advocacy group Health Care for America. The location had bathrooms and a place for media to do interviews and file stories. Opponents had neither.

Despite all the tension, supporters and opponents were mostly in agreement on one thing after the 90-minute hearing. Both sides thought the judges were anxious to rule on the merits of the law, rather than let a 19th century law delay them. The Monday hearing was over whether the penalties for people not buying health insurance under the law amounted to a tax. If so, an 1867 statute holds that Americans cannot challenge a tax until it has been collected. The first penalties for violating the health care law’s individual mandate do not kick in until 2014, and they must be paid on federal tax returns in April 2015.

Rev. Paul Schenck, a Harrisburg, Pa., minister and chairman of the National Pro-Life Center,  said judges were inquisitive but indicated they had the authority to rule on the case. “They had a lively argument, but they are ready to move on this,” he said.

Ezekiel “Zeke” Emanuel, who helped the White House draft the health law, is the brother of former White House Chief of Staff Rahm Emanuel and now works as a bioethicist at University of Pennsylvania, agreed. “It’s a penalty, not a tax,” Emanuel said. He noted how Justice Ruth Bader Ginsberg observed during the hearing that the 1867 law was put in place to prevent Americans from blocking a law meant to raise revenue for the government. Emanuel said the penalty will “only raise a couple billion dollars”— or a tiny fraction of the nearly $1 trillion cost of the law. The penalty was put in the law not to raise money, but to get younger and healthier Americans to buy insurance to help spread insurance risk, he said.

The Congressional Budget Office estimated the penalty would raise $4 billion over 10 years.

Pam Bondi, the Republican Attorney General of Florida who filed suit against the law,  said after the hearing she was confident the judges believe they have the authority to move forward. “They do not believe this is a tax,” she said.

As Bondi was whisked away, she gave high fives to several tea party supporters who thanked her for opposing the law.