The rate change, part of the Affordable Care Act, is the next step in winding down a subsidy that pays Medicare Advantage plans substantially more than what traditional Medicare costs. Proponents say the move will end what they call an industry windfall and pressure insurers, hospitals and doctors to deliver care more efficiently.

The industry, which maintains the cuts will raise costs and reduce consumer benefits, has launched a massive national counterattack, running numerous “seniors are watching” ads, getting beneficiaries to pepper politicians with calls and letters, and lobbying the administration to back off. 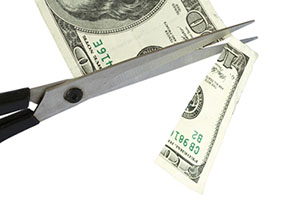 The final 2015 Medicare Advantage rates are expected to be released Monday. Here are some common questions about the controversy.

I’m not in a Medicare Advantage plan. Does this affect my traditional Medicare?

No. Fewer than a third of Medicare beneficiaries use Medicare Advantage. Nor do proposed cuts affect “Medigap” policies that supplement regular Medicare coverage.

Why is the insurance industry trying so hard?

The stakes are enormous and Democrats in Congress and the Obama administration are seen as more susceptible than usual to pressure. It’s an election year. The Affordable Care Act remains unpopular. And threats to Medicare often motivate older voters.

“For a lot of these vulnerable Democrats, one, they need the seniors. Two, there’s a lot of money that could go for or against them” in November, depending on what the administration does Monday, said Lee Drutman, a lobbying expert with the Sunlight Foundation, a Washington, D.C.-based organization focused on government transparency.

A spokesman for America’s Health Insurance Plans, the main industry lobby, said the effort is its “largest-ever mobilization.” Industry critic and former insurance executive Wendell Potter said it may be the biggest insurance publicity campaign since the “Harry and Louise” ads, which helped undermine the Clinton administration health-reform effort in the 1990s.

Ads criticizing Democrat Alex Sink for supporting “deep cuts to Medicare Advantage… to pay for Obamacare” helped her lose a special congressional election in Florida last month, analysts said. (The U.S. Chamber of Commerce sponsored the spot. AHIP, which has given the chamber money in the past for advocacy, didn’t pay for it, said AHIP CEO Karen Ignagni.)

What are the stakes?

The nonpartisan Congressional Budget Office estimates the health law would reduce Medicare Advantage payments by $156 billion over a decade. In February the Department of Health and Human Services announced tentative cuts that most analysts calculated to be around 5 percent, which would reduce insurer payments by $7 billion next year alone.

At UnitedHealth Group, one insurance giant, Medicare Advantage plans account for a fourth of all profits, said Ana Gupte, an industry analyst for Leerink Partners. Another, Humana, owes two-thirds of its profit to Medicare Advantage, she said.

“It’s a big deal. It’s huge,” she said of Monday’s expected announcement. “2015 earnings are very, very dependent on what the rates look like.”

Lower government payments would induce them to offer fewer Medicare Advantage plans and raise costs for members, they say.

Last year, similar pressure on payments caused “reductions in benefits, increases in out-of-pocket costs and changes in provider networks,” said Ignagni. “A number of seniors are living in areas where they’ve had a reduction in choice” of plans. Others see little change.

While some carriers withdrew from some markets, others expanded. The number of Medicare Advantage plans stayed about the same from 2012 to 2013, according to the Medicare Payment Advisory Commission.

What happens if my Medicare Advantage plan leaves town?

Evidence is mixed. Some studies show higher clinical quality on several measures and more appropriate use of procedures. Other research suggests that results for Medicare Advantage plans seem better only because gym memberships and other perks attract members who are substantially younger and healthier.

How profitable are Medicare Advantage plans for insurance companies?

The plans earned an average profit of 4.5 percent in 2011. Policies covering more than half the members that year would have met new requirements to spend a minimum on medical care rather than administration and profits, according to the Government Accountability Office.

A new paper by economists from the University of Pennsylvania’s Wharton School finds that the higher rates HHS pays for Medicare Advantage contribute more to insurer profits and advertising spending than consumer benefit.

“It doesn’t seem obvious to me that we should do any delaying in the cuts on Medicare [Advantage] reimbursement,” said Mark Duggan, one of the authors. “It appears that it will cause minimal adverse effect to consumers.”

If the Affordable Care Act says to cut Medicare Advantage payments, how much room does HHS have to do something else?

HHS has broad administrative power to adjust what insurers get for Medicare Advantage beyond changes required by law. For example, the agency’s decision to temporarily increase bonuses for plans that met “star” quality targets starting in 2012 counteracted some of the mandated cuts.