Hospitals, nursing homes, doctors and state health programs could survive a brief pinch if the Washington debt ceiling deadlock leads the government to stop paying Medicare and Medicaid bills. But if an impasse were to drag on for more than a few weeks, health care providers could be unable to pay their staffs or even face insolvency, according to health care experts and former government officials.

Even as the Tuesday deadline for a deal between President Barack Obama and Congress approaches, the implications of a worst-case scenario remains speculative. The Treasury Department hasn’t signaled how it would prioritize which government bills to pay. Few health care providers have made any doomsday plans, but the uncertainty is making many edgy.

On The Capsules Blog

What Will States Do If Federal Dollars Stop Flowing?

“It’s not a matter of planning right now because there’s too much unknown,” says Cheryl Phillips, senior vice president for advocacy for LeadingAge, an association of 5,600 not-for-profit home health agencies, nursing homes and other organizations that work with seniors. She says that many of their members have very limited operating margins, so a stop in payment could quickly be destructive.

There’s no precedent for this kind of fiscal crisis, although Medicare providers have experienced short-term delays in the past when Congress made last-minute changes to Medicare reimbursement rates, says Gail Wilensky, who ran Medicare, the federal health program for the elderly and disabled, under President George H.W. Bush.

“I’m sure it irritated the providers, but it didn’t affect the beneficiaries,” Wilensky says, noting that despite delays that sometimes stretched for several weeks, business continued as usual. “In the short term, there should be little to no effect.”

Others believe financial pain could come rapidly for some. John Reiss, a Philadelphia lawyer who advises hospitals, doctors and medical device makers for the firm Saul Ewing, says his clients are “dumbfounded” by the ongoing deadlock but still assume that there’ll be a deal before it’s too late.

If not, he says some facilities have enough cash on hand to last for several months, but “there are some hospitals surviving on six or seven days cash on hand and those places are going to be in trouble.” 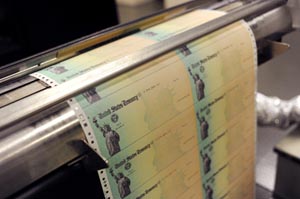 Stan Rosenstein, a health care consultant and the former director of California’s Medicaid program, known as Medi-Cal, says a prolonged impasse could be “devastating.” Nursing homes in particular rely on Medicare and Medicaid, the joint state-federal program for the poor, for most of their payments and could rapidly be unable to finance their daily operations, he says.

“California has had a lot of experience in this with its late budgets and it only takes a couple or three weeks for it have a major impact,” says Rosenstein, referring to when the state legislature deadlocked over budgets and the state stopped paying its bills, including for Medi-Cal.

But the worst case scenario here would be more apocalyptic, he says. That’s because health care providers would lose revenues from Medicare and Medicaid at the same time. Plus, a debt default could also unnerve the capital markets, making it difficult or impossible for providers to borrow money to stay afloat. And states are having so many financial problems that they’re not in a position to fill in the gaps.

Matt Salo, executive director of the National Association of Medicaid Directors, says that in the “worst-case scenario, Aug. 2 comes around with no deal, Medicaid is not going to shut down.” But if the bond markets melt down, states could face higher interest rates on money they’ve already borrowed from investors, making it even harder for states to pay their share of Medicaid, which is generally about half, he says. The federal government on average pays about 56 percent of Medicaid costs.

How quickly states feel the pain depends on the schedule Medicaid pays them. Rhode Island receives payments every two weeks, and it was just paid yesterday, says Fred Sneesby, a spokesman for the state’s Department of Human Services. The next scheduled payday is Aug. 12. California, though, is paid every week, Rosenstein says.

“I don’t think there’s any state that has the wherewithal to advance the money,” says Rosenstein, who advises states, insurers and providers for the consulting firm Health Management Associates.

Thomas Scully, who was the administrator for Medicare under President George W. Bush, says if there is a default, the Obama administration’s political decisions will determine how quickly health care payments are shut off. “They’re either going to shut down Medicare and Social Security first or last,” he says. “If they want to provoke a crisis they would quit paying hospitals and doctors and quit sending out Social Security checks.”

Donna Shalala, who was health and human services secretary under President Bill Clinton, says Medicare pays its claims within two weeks, which is faster than many private insurers. “The health care system is very dependent on Medicare payments, because they come very quickly,” she says. “If they’re not reimbursing, that would create problems for the entire industry  hospitals, doctors, everyone. It is not a happy scene.”

Doug Myers, chief financial officer for Children’s National Medical Center in Washington, D.C., says 55 percent of the hospital’s patients are on Medicaid. He said the hospital would “start feeling the impact” within 30 days of a halt in federal funding.

“Whatever happens to Medicaid, happens to Children’s National,” he says.

Martha Roherty, executive director of the National Association of States United for Aging and Disabilities, says she’s been advising state agencies that advocate for services for the elderly to immediately claim any money they’re entitled to from federal grants. Usually, she says, they do it just once a month or quarterly.

“We have been telling them” to “take it now,” she says. Roherty added that basic services that rely on federal money, such as senior centers and nutrition meals that are delivered to people’s homes, could quickly shutter if the federal government stops paying those bills.

Paul Ginsburg, president of the Center for Studying Health System Change, a Washington think tank, says the health care system is actually in a better position to handle a halt in government payments than many other sectors of the economy. “Medicare and Medicaid beneficiaries are going to be able to get care for a while, while if a store is selling something and people don’t have money to buy it, that will hit immediately,” he says.

Salo agrees that by the time health providers are in serious trouble, everyone else will be too. “If we go into default for a really long time,” he says, “I’m guessing cash flow in Medicaid is not going to be the biggest of our concerns.”

Health Industry Could Feel Pinch, Then Pain From Default

By Christopher Weaver and Jordan Rau and Jessica Marcy July 29, 2011