Of all the contentious claims about the Affordable Care Act, few have been more contentious than over the impact it’s having on employers. 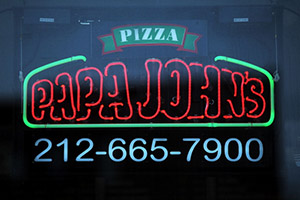 Restaurant employees have been a focus of debate on Obamacare coverage (Photo by Spencer Platt/Getty Images).

It’s hard to pick up a newspaper or turn on a television without seeing a story about some boss cutting workers’ hours or saying they won’t be doing any more hiring because of the health law.

But is the law really having an impact on the economy?

Not surprisingly, it depends whom you ask.

Opponents of the law point to anecdotes in industries with a lot of low-wage workers, like restaurants.

They also point to employer surveys like one from the International Foundation of Employee Benefit Plans. It found that nearly one in five small businesses said they were reducing hiring to try to stay under the 50-worker threshold that exempts companies from a requirement in the Affordable Care Act that full-time employees be offered health insurance. Another 16 percent said they planned to adjust hours so fewer workers would be eligible for health insurance.

But now the law’s supporters, including the White House, are fighting back.

That includes people working part time who’d rather be working full time. That data shows that most of the people involuntarily working part time are in that situation due to state and federal budget cuts, not the health law. They’ve also pointed out that weekly hours have risen since the health law was passed, including in the restaurant industry.

It’s entirely likely that both sides are. One of the White House talking points is that only about one percent of the workforce would be impacted by the Affordable Care Act requirements. Those are typically people who don’t have health coverage and who work more than 30 hours a week for companies with more than 50 employees.

That’s not a big enough group, they point out, to really affect the economy on a macroeconomic level. And it’s not.

But one percent of the workforce is more than a million people, more than enough to make for a lot of anecdotes. There’s also the issue that the administration and its allies are looking back at what’s happened so far, while opponents are looking mostly forward at what may happen in the future.

Still, there are efforts on Capitol Hill to address one point of contention: The law defines full-time work as more than 30 hours per week, rather than the traditional 40.

Sens. Susan Collins R-Maine, and Joe Donnelly, D-Ind., have introduced the “Forty Hours is Full Time Act of 2013,” which they say would “ensure that the definition of full-time employee and full-time equivalent in the ACA is consistent with the traditional full-time 40-hour work week.” A similar bill has been introduced in the House.

The prospects for the legislation, however, are not good.

One reason is that Congress is so gridlocked and Republicans are so dug in against the law that even when there is a consensus that something needs to be fixed there is little likelihood of it happening.

And on this issue there’s no consensus that changing the definition of a full-time work week would actually change employers’ incentives.

University of Chicago economist Casey Mulligan, writing in the New York Times, suggested that such a change could create its own set of disincentives, with a 39-hour-a-week job with no insurance potentially paying more than a 40-hour-a-week job with employer insurance, because of subsidies available for health insurance in the new health exchanges.

Definition Of ‘Full Time’ Becomes A Sticking Point In Obamacare