No one wants to go to the dentist, but kids need to. A small cavity left to fester can grow into a big health problem. That’s why the government made pediatric dental care one of the health law’s “essential benefits.”

But new data suggest the law is failing to fully deliver on its promise: A lot of parents didn’t buy dental coverage during the recent online enrollment period.  That spells trouble, according to health experts. 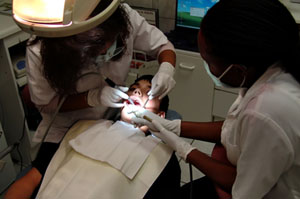 By age 5, about 60 percent of U.S. children will have had cavities; 40 percent have them when they enter kindergarten, according to a report from the American Academy of Pediatric Dentists. Children with tooth decay are more likely to have ear and sinus infections. The chance of developing other chronic problems like obesity, diabetes and even heart disease also increases.

Dr. Paul Reggiardo, chairman of the American Academy of Pediatric Dentistry’s Council on Dental Benefit Programs, says early dental problems can affect children’s learning, how they interact with other kids and their ability to eat.

“It starts having an impact much more than cavities,” he says.

Many children get coverage through their parents’ employer-based health insurance or the government-funded Children’s Health Insurance Program and Medicaid, which serve low-income people. But the American Dental Association says there’s still a big gap: 10 million children aged 2 through 18 had no dental insurance in 2011.

The health law marketplaces that opened last year were designed to help people who don’t qualify for Medicaid and don’t have workplace coverage. Parents seeking pediatric dental insurance had two options: purchasing it as part of a family medical plan or as a separate, stand-alone policy.

Federal officials don’t yet know how many kids got dental coverage through a family medical plan in the first enrollment period, which formally ended March 31. But they have reported numbers for stand-alone dental plans sold through the federal website serving 36 states: Just 63,448 children received this coverage.

One reason is shopping for coverage is complicated and confusing – not at all like picking a toothbrush from a shelf, experts say. Perhaps more importantly, there’s no separate subsidy for buying dental coverage and no federal penalty for failing to buy it. Only three states – Kentucky, Nevada and Washington – require parents to buy a children’s dental plan.

In light of these problems, “Are we expanding dental access for kids?” asks Marko Vujicic, chief economist and vice president of the American Dental Association’s Health Policy Institute.

Only 26 percent of medical plans sold on the federal exchange included pediatric dental benefits, according to an ADA study. Parents often confronted difficult choices – the ideal medical plan for their family might not have dental care for the kids, for example. To get that coverage, they’d have to buy a stand-alone plan at an additional cost.

Stand-alone plans are sold as either high–option policies, which likely involve higher premiums but smaller out-of-pocket costs; or low-option plans, for which premium payments may be less expensive but enrollees may have more out-of-pocket costs. Both cover preventive care and services like fillings, sealants and medically necessary orthodontia, says Evelyn Ireland, executive director of the National Association of Dental Plans. Utah and Michigan don’t offer orthodontia coverage.

Prices for stand-alone plans vary not only by option but also where people live. Insurance markets are regional, not national, so costs and competition vary greatly. For the current year, a family in Cleveland County in southwestern North Carolina could pay as little as $33 a month for a low-option children’s dental plan while another family in Beaver County in southwest Utah could pay as little as $8 for the same level plan, according to a KHN analysis of premium data for the federal marketplace.

Open enrollment resumes Nov. 15, but insurers are already developing plans and prices that will be submitted to regulators in the months ahead.

The federal health law provides income-based tax credits for buying medical plans, but not always for buying a separate dental plan. “[Parents]don’t get the same support for picking a dental plan and paying for it as they do with medical plans,” says Joe Touschner, a senior health policy analyst with the Center for Children and Families at Georgetown University.

Deductibles, the amount policyholders pay before coverage kicks in, also vary by plan.

When shopping for a medical plan with built-in pediatric dental benefits, parents will likely want to pick one that has a separate deductible for dental coverage, says Ireland. Otherwise, a child’s dental needs may not be covered until the medical deductible is met. However, in most cases when plans use a single deductible, policyholders are covered for preventive services and do not pay out of pocket, Vujicic said.

The law places limits on out-of-pocket costs. For medical plans with dental care, all spending counts toward the limit. For stand-alone children’s dental plans, the limit is $700 for one child and $1,400 if the plan covers two or more kids.  For 2015, the Department of Health and Human Services lowered the out-of-pocket limits on the stand-alone plans to $350 for one child and $700 for two or more covered children.

Ultimately, though, those who bought a dental plan may be left wondering how it works and what it pays for.

“I’m not sure consumers know what they are getting,” Vujicic says.

Correction: This article has been updated. Twenty-six percent of medical plans sold on the federal exchange included pediatric dental benefits.