Clyde Boyce has been hospitalized 14 times in the past four years.

Boyce, 61, survived two strokes and five operations to unblock arteries around his heart, including three procedures in which doctors propped open his blood vessels with stents. He takes 18 pills a day and gets injections every two weeks with a powerful drug to lower cholesterol.

Yet the disease that came closest to taking Boyce’s life wasn’t a heart condition. It was depression, which led him to attempt suicide twice in the year after his first surgery.

One in 5 people hospitalized for a heart attack or chest pain develop major depression — about four times the rate in the general population, according to the American Heart Association. One in 3 stroke survivors become depressed, along with up to half of those who undergo heart bypass surgery.

Heart disease patients who become depressed are twice as likely to die within the following decade as other patients, according to an unpublished study presented in March at the American College of Cardiology’s annual meeting.

Depression increased the risk of death more than any other risk factor in the study — even smoking, said lead author Heidi May, a cardiovascular epidemiologist at the Intermountain Medical Center Heart Institute in Salt Lake City.

Most often, depressed heart attack survivors die of physical causes, partly because they’re less motivated to take care of themselves and take medication as directed, said Dr. Martha Gulati, a spokeswoman for the American College of Cardiology.

People suffering from depression are also more likely to smoke but often less likely to exercise and follow a healthy diet than those who are not depressed, Gulati said.

“You may be told to change your diet, but if you’re depressed, you may think, ‘This is too overwhelming. I can’t even process this information right now,’ ” said Kim Smolderen, an assistant professor at the University of Missouri-Kansas City.

The American Heart Association has recommended that cardiologists screen all heart attack patients for depression, using a short questionnaire, since 2008.

Yet nearly a decade later, relatively few cardiologists screen patients for depression, Smolderen said. In May, she published a study in Circulation of younger heart attack survivors, most of whom were women, showing that only 42 percent of depressed heart attack patients received treatment.

Overall, only half of all Americans diagnosed with depression receive care, according to the National Institute of Mental Health.

Many cardiologists say they don’t have the time or the expertise to handle mental health care, Smolderen said. Critics note there’s little to no evidence that depression screening prevents additional heart attacks.

Yet many doctors also fail to refer patients to cardiac rehabilitation — a program of supervised exercise and education — which has been shown to both reduce depression and help prevent heart attacks and deaths, according to a 2015 study in JAMA Internal Medicine.

Although the American Heart Association strongly recommends cardiac rehab, doctors refer only 2 out of 3 heart attack survivors for the program, the study found.

A fraction of patients referred to the program — which involves three sessions a week for 12 weeks — actually show up. Due to cost and other barriers — such as long drives to hospital rehab centers — just 23 percent of patients attended one or more sessions, and 5 percent completed all 36 recommended sessions, the study found.

Cardiac rehab programs include stress management and teach relaxation techniques and coping skills similar to those used in some types of depression therapy. The programs can reduce the risks of heart attack more than standard rehab.

In a three-year study published in Circulation last year, which included heart patients ages 36 to 84, nearly half of patients who didn’t attend cardiac rehab died or had a heart attack, stroke or hospitalization due to chest pain, compared with 33 percent of those who attended rehab.

Among those whose rehab included stress management, only 18 percent suffered one of these heart-related complications, the study found.

Boyce — who said depression sent him into rages that tested his marriage — said no one screened him for mental illness after his heart procedures, although he had suffered several debilitating depressions since adolescence.

He wasn’t prescribed antidepressants, Boyce said, until after his first suicide attempt.

“The system failed him,” said psychologist Barry Jacobs, a spokesman for the American Heart Association, when he heard Boyce’s story. “What you’re describing is not the way it’s supposed to work.”

After Boyce’s second heart procedure, he stopped taking his heart medications for five days — a move that his doctors viewed as a suicide attempt. His doctor committed him to a state psychiatric hospital for almost a week, prescribed medication and referred him to a psychiatrist.

Yet Boyce’s depression deepened as the bad health news piled up. Doctors diagnosed heart rhythm problems that required a pacemaker; congestive heart failure, caused when weakened heart muscle allows fluid to build up in the lungs; as well as asthmatic bronchitis, which affects the lungs. Boyce began to dread that he would suffer a fate similar to his mother, who died after six months in a coma, brought on by a long battle with heart disease.

A year after his first suicide attempt, Boyce tried to overdose on prescription medication. His wife found him and took him to the hospital, where doctors committed him to a psychiatric ward.

“Everything was happening so fast,” said Boyce, a former advertising executive from Murchison, Texas, who retired due to his health problems. “I was just convinced I was going to die. I thought to myself, ‘I’m going to end up on a ventilator, unconscious, just like my mother.’ ” 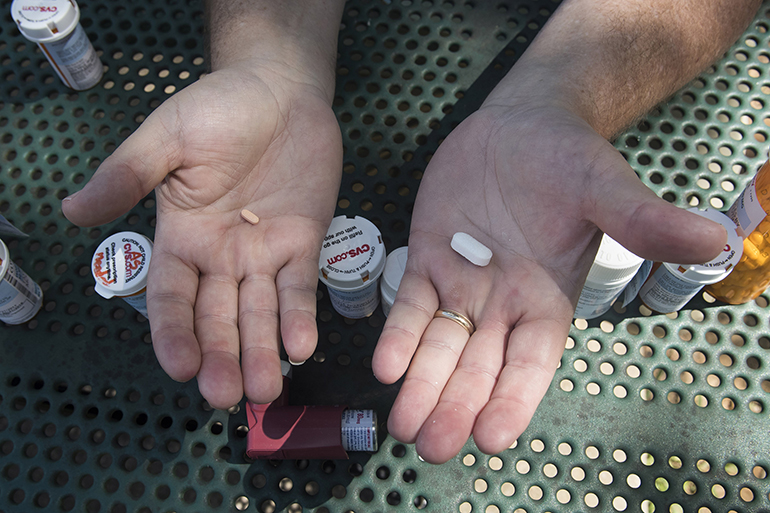 Boyce, 61, of Murchison, Texas, shows his smallest and largest pills — two of 18 he takes every day for various conditions. (Sarah A. Miller for KHN)

Boyce received help from a variety of sources: medication; counseling with a psychologist; a “mindfulness” stress reduction program, which borrows techniques used in meditation; and cardiac rehabilitation.

“I do think the rehab raised my spirits … feeling like I could still do some things,” Boyce said.

What helped Boyce turn the corner, he said, was a conversation with God.

“It was the night before my third or fourth operation, and for some reason, I was sure I was not going to live through it,” Boyce said. “I said, ‘God, all I ask is that you give me one more day, and I will try to be a better man every day.’”

Boyce lost his fear of death. Although he occasionally still gets depressed, Boyce said, he’s able to manage his fears and anxieties better than in the past.

An Expensive Problem To Ignore

Cardiologists are divided about whether to screen heart patients for depression, but many primary care doctors have embraced the idea, said Dr. Ken Duckworth, medical director for the National Alliance on Mental Illness.

Both the American Academy of Family Physicians and the U.S. Preventive Services Task Force, an expert panel that advises Congress on health care, now recommend that doctors screen all adults for depression. The family physician group also singles out heart attack survivors for depression screening.

Studies increasingly suggest that the most effective care comes from addressing physical and mental health conditions together, rather than forcing frail patients to make separate trips to a variety of specialists, Duckworth said.

Successful approaches have involved “packages of care,” rather than individual services, said Dr. Bruce Rollman, a professor at the University of Pittsburgh School of Medicine.

The team approach is key.

In an approach called collaborative care, mental health nurses or social workers serve as care managers, who reach out directly to patients, often by phone, to educate them about their disease, suggest ways to manage their depression and make sure that treatments are working, said Dr. Mary Whooley, director of cardiac rehabilitation at the San Francisco VA Health Care System.

Care managers work with primary care doctors to quickly adjust patients’ medications or other treatments as needed. They consult with a psychiatrist, often over the phone, Whooley said.

“You can’t stay home and get depressed … they won’t let you,” said Dr. Anita Everett, president of the American Psychiatric Association. “They reach out to you.”

A 2014 study in JAMA Internal Medicine found that collaborative care could be delivered over the phone. Patients in the study had blocked arteries, heart rhythm problems or heart failure.

Even on the phone, care managers “develop a trusted relationship with our patients,” said study co-author Dr. Bruce Rollman, a professor at the University of Pittsburgh School of Medicine.

An earlier study of collaborative care, which focused on patients who had undergone bypass surgery, found that telephone care not only improved depression, quality of life and patients’ physical functioning, it saved over $2,000 a year per patient. Rollman is now studying ways to treat depression and heart failure together.

Keeping depression under control can save money if patients stay healthy and spend less time in the hospital, Rollman said.

Depression costs the U.S. more than $210 billion a year, with much of the cost coming from reduced productivity at work, according to a 2015 study.

“There are very, very few things in health care that save money,” Rollman said. “A mild decrease in depression led to a big decrease in cost.”

Officials at the University of Pittsburgh Medical Center Health Plan were impressed enough by the results to include depression screening as part of a checklist of care for patients who are sent home after a heart attack.

In that time, Medicare payments for depression screening have grown from $1.7 million a year to $9.5 million a year, according to a Kaiser Health News analysis. While those screenings make up a small fraction of Medicare’s annual budget of $646.2 billion, Duckworth called the services “a noteworthy trend in the right direction.”

Elizabeth Lucas contributed to this story.

Depression Among Heart Attack Survivors Can Be Deadly, Yet Is Often Ignored