Norma and Rodolfo Santaolalla have always worked but have never had health insurance.  When the Arlington, Va., couple tried to apply online for coverage under the health care law, it was just too confusing.

“I didn’t understand about the deductibles and how to choose a plan. It’s difficult. It’s the first time we’ve done that,” said Norma, 46, who cleans houses for a living.  Rodolfo, 47, is a handyman. “That’s why we came here, to ask them to help us.” 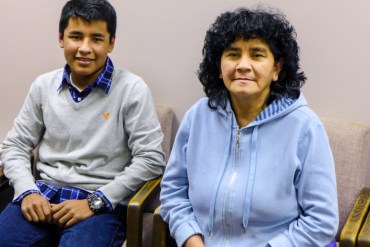 Daniel Palacios, 17, and his aunt, Lusmila Morales, 53, wait for enrollment assistance at Legal Services of Northern Virginia in Arlington, Va. Morales, of Falls Church, Va., wants coverage so she can get a physical (Photo by Mary Agnes Carey/KHN).

“Here” was the Arlington Mill Community Center, where help was available on a recent Saturday as part of a national effort to increase Affordable Care Act enrollment, especially among Latinos.

Hispanics represent about a third of the nation’s uninsured, and for a number of reasons, signing them up has been harder. According to the latest government statistics, as of Jan. 16, two months into the current open enrollment period, just 10 percent of those who had enrolled in the 37 states served by healthcare.gov are Latino. Despite a concerted effort by officials and health law advocates to reach Latinos, that’s up only slightly from 7 percent during the first few months of last year’s enrollment.

Experts caution that those numbers are reported by applicants and there’s no requirement that anyone signing up for coverage on healthcare.gov state their race or ethnicity. Nonetheless, the Department of Health and Human Services and pro-health-law groups have stepped up their efforts through media campaigns and with a greater emphasis on the kind of in-person assistance the Santaolallas and many other Latinos are seeking.

In fact, nearly a third of the ACA’s media budget this year is focused on Hispanic media, tripling the 10 percent spent on reaching Latinos last year, according to HHS Secretary Sylvia M. Burwell.

Providing in-person assistance, however, takes time.  A session can easily run 90 minutes to two hours, and several meetings are often needed to explain how insurance works and what the various options are. Even though applicants may qualify for the law’s tax credits, many will have to still pay a premium each month. And people who have been doing without health insurance might not feel the need to pay for it. 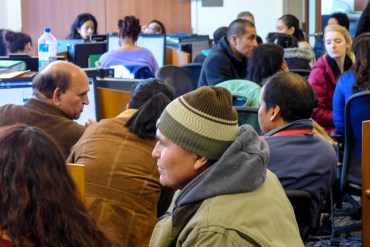 Still, since October 2013, 2.6 million Latinos ages 18 to 64 gained insurance through the health law, according to HHS.  As of last June, the percentage of Latinos without health insurance dropped from 36 percent to 23 percent, with the highest gains in states that adopted the health law’s Medicaid expansion, according to a Commonwealth Fund analysis. That’s important to the success of the overall health law, because uninsured Latinos tend to be young and healthy. They are likely to use fewer medical services and thus will help offset the cost of sicker people in the insurance “risk pool.”

To enroll, though, some Latino applicants have to work through extra paperwork and overcome language barriers.

Joaquin Barahona, 41, is a construction worker. He’s never had health insurance, and when he did go to the doctor, he paid cash.

When he tried to enroll in the health law in late January, at the Legal Services of Northern Virginia in Arlington, he found that the health law’s website couldn’t verify his identify. Now the Centreville resident will have to mail in additional documents, including his employment authorization card.

That same evening, Lusmila Morales, 53, also hopes to obtain ACA coverage. She sent in a paper application last year but never heard back and wanted to try again this year. She brought along her 17-year-old nephew to translate.

The Falls Church resident is applying for health insurance “out of necessity,” said her nephew, Daniel Palacios. She has arthritis but can’t afford the medication. She needs a mammogram and a physical but can’t afford the tests. In addition, her mom has diabetes and she wants to find out how her parents — who are both in their 80s and here legally but without the work history that would qualify them for Medicare –can get coverage under the health law.

But Morales couldn’t complete her application because she forgot her green card, which proves she is a lawful permanent resident of the United States. She would have to come back.

One of the most stubborn obstacles is the widespread fear in the Latino community that those who are eligible for coverage might endanger others in their family who are undocumented. That concern persists even though President Barack Obama and other administration officials have said repeatedly that no information on a health law application will be used for deportation purposes.

“The federal government can proclaim every day, every hour on the hour how immigration information in the exchange is not going to be used for deportation proceedings, but it’s still really scary,” said Alicia Wilson, executive director of La Clinica del Pueblo, a Washington, D.C., health center that provides comprehensive services primarily to the Latino community.

“You don’t want to be the family member that because you signed up for coverage you’re getting your grandmother, your uncle or your parent deported,” said Anthony Wright, executive director of the group Health Access California, a health care consumer group. 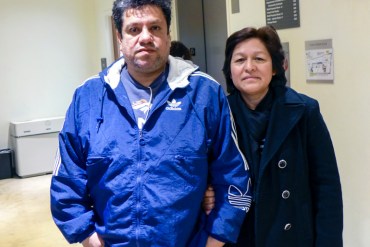 Mixed immigration status families also face special challenges when it comes to enrolling in the health law, Wilson said.  Some may be here legally but are not eligible for coverage under federal programs. Some may have children who were born in the U.S. but other family members who are undocumented.  Some may qualify for health insurance through a job while family members qualify for Medicaid or the Children’s Health Insurance Program.

“Each one of those insurance vehicles has a different enrollment process and different eligibility criteria, a different set of documents that you have to demonstrate, a different level of proof of who you are and a different schedule for enrolling and reenrolling,” Wilson said. She added that the identification process can be even more difficult for those who do not have a credit history.

The patchwork of state-based and federally based exchanges can also cause confusion, with some state governments more welcoming than others when it comes to Latino outreach and enrollment efforts.

Just over half of states have expanded their Medicaid programs, with Indiana the latest to make the change. According to HHS, if all states participated in the health law’s Medicaid expansion, 95 percent of uninsured Latinos might qualify for Medicaid, CHIP  or tax credits to help lower the cost of health insurance on the federal and state marketplaces.

The fact that this year’s enrollment period is  three months shorter than last year’s further complicates efforts to enroll the uninsured.  And those who work with the Latino community say because so many in it have been uninsured for so long, it’s not surprising that it will take longer to increase their enrollment.