Definitive 2012 numbers show continued, historically low increases in medical prices and the use of medical services. Health spending rose 3.7 percent, up slightly from 2011 but far below the 8 percent increases of the early 2000s, according to figures released Monday by the Centers for Medicare & Medicaid Services. 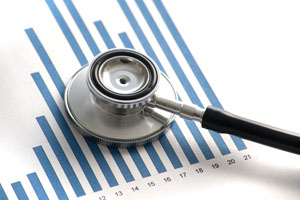 Health spending has grown faster than incomes and overall economic output almost continuously for decades. But 2012 marked the second year in a row in which health expenditures shrank slightly as a portion of the economy. The annual CMS report is seen as the most precise accounting of an industry that has grown to be a sixth of the economy. Early results suggest that health-cost escalation stayed moderate again in 2013.

Those trends, if continued, would transform dismal projections for government deficits. They would give employers more room to raise workers’ wages instead of paying big increases for insurance premiums. They might ease the pressure to increase consumers’ out-of-pocket health costs.

But analysts who published the data gave much of the credit to lingering effects of the 2008 economic crash. They refused to say the health-cost monster is dead or even wounded.

And despite White House claims that the Affordable Care Act should get credit for taming medical spending, the health law played almost no role in raising or reducing 2012 health costs, the analysts said in the CMS report published in Health Affairs. (Most of the law’s coverage expansion doesn’t become effective until this year.)

“We see no evidence to say that the cycle has been broken,” said Anne Martin, a CMS economist.

Many factors that contained expenses are one-time deals. The recession and its aftermath reduced demand for care. Expiring patents for blockbuster drugs Plavix, Singulair and Lipitor meant health plans could buy much cheaper generic versions. (Three-fourths of all prescriptions in 2012 were less than $10.) Medicare cut payments to high-level nursing homes following an increase the year previously.

Health spending by the federal government, whose Medicare program for seniors welcomed millions of baby boomers in 2012, fell by 0.6 percent.

Some sectors showed greater-than-average increases. Hospital spending grew 4.9 percent, up from a 3.5 percent for 2011, driven by what analysts described as new demand for care as the economy recovered. Increased visits also helped push doctor office spending up 4.6 percent.

The big question is whether those increases herald a return to past patterns. Health costs usually slow down after recessions and then accelerate along with a recovering economy. The Kaiser Family Foundation calculated that three-fourths of the deceleration from 2008 to 2012 was caused by a weak economy that prompted consumers to delay care and government to cut medical outlays. (Kaiser Health News is an editorially independent program of the foundation.)

But others think that something may be different this time, that cost containment by business and government combined with greater out-of-pocket costs borne by consumers may keep expenses under control.

Not the CMS analysts.

“The relatively low rates of growth that we’ve seen over the last four years … are consistent with what we’ve seen in post-recessionary periods in the past,” said Aaron Catlin, deputy director of CMS’s Health Statistics Group.

Detailed Report Delivers Good News On Health Costs, But Will It Last?