A 78-year-old Vermont mother of four who helped change Medicare coverage for millions of other seniors is still fighting to persuade the government to pay for her own care.

Glenda Jimmo, who is legally blind and has a partially amputated leg due to complications from diabetes, was the lead plaintiff in a 2011 class-action lawsuit seeking to broaden Medicare’s criteria for covering physical therapy and other care delivered by skilled professionals. In 2012, the government agreed to settle the case, saying that people cannot be denied coverage solely because they have reached a plateau and are not getting better. 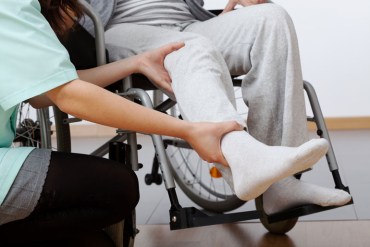 The landmark settlement was a victory for Medicare beneficiaries with chronic conditions and disabilities who had been frequently denied coverage under what is known as “the improvement standard” —a judgment about whether they are likely to improve if they get additional treatment. It also gave seniors a second chance to appeal for coverage if their claims had been denied because they were not improving.

Jimmo was one of the first seniors to appeal her original claim for home health care under the settlement that bears her name. But in April, the Medicare Appeals Council, the highest appeals level, upheld the denial.  The judges said they agreed with the original ruling that her condition was not improving — criteria the settlement was supposed to eliminate.

After running out of options appealing to Medicare, her lawyers filed a second federal lawsuit in June to compel the government to keep its promise not to use the improvement standard as a criterion for coverage.  They are asking Medicare to pay for the home health care that Jimmo received for about a year beginning in January 2007.

“There was really no expectation that she would improve — she was getting skilled nursing and home health care to maintain her condition and reduce complications,” said Michael Benvenuto, director of Vermont Legal Aid’s Medicare Advocacy Project, who has filed review requests for 13 other seniors.  “It shows there may be real problems with implementing the settlement at the very highest level.”

In the settlement, Medicare officials had agreed to rewrite Medicare’s policy manuals to clarify that as long as patients otherwise qualify for coverage — for instance, they have a doctor’s order for skilled care to preserve their health or to prevent or slow deterioration —Medicare must pay for therapy and other care at home, in a nursing home or office.   Each of those settings has additional restrictions: for instance, nursing home coverage still requires a prior three-day hospital admission, and there are dollar limits (with exceptions) on physical, occupational and speech therapy.

They also agreed to educate providers, billing contractors and appeals judges about the change.

Medicare officials confirmed the settlement’s review process puts appeals into the regular appeals system,  but they would not say how many requests have been received or approved.

People shouldn’t have to decline in order to get the care they need.

Nearly five million Medicare beneficiaries received physical, occupational or speech therapy in 2011, with an average of 16 visits, according to the Medicare Payment Advisory Commission, an independent group that advises Congress.

The council’s decision makes no sense to Judith Stein, executive director of the Center for Medicare Advocacy,  which filed the original class action lawsuit with Vermont Legal Aid  and helped negotiate the Jimmo settlement.

“People shouldn’t have to decline in order to get the care they need,” Stein said. “It is ironic and also not unusual for people to find themselves in that circumstance. We are unfortunately finding providers are still reluctant to provide care because they are so accustomed to Medicare denials based on a need for improvement.”

She recommended that seniors or their families get the center’s free “self-help” packet and contact her if they still have problems accessing care at improvement@medicareadvocacy.org.

The Parkinson’s Action Network, one of the seven advocacy groups that had joined the original Jimmo lawsuit, still receives several calls a week from patients who are told Medicare won’t cover their care because they are not improving.  But Parkinson’s disease is an incurable chronic degenerative neurological condition.

Joshua Cohen, a physical therapist with a small practice near Chapel Hill, N.C., is worried claims he submits to Medicare may still be questioned or denied. When patients are not progressing, he tells them they can continue therapy if they sign Medicare’s “advanced beneficiary notice of non-coverage” form, promising to pay the bill if Medicare doesn’t. “That in and of itself often prevents further therapy,” he said because patients are afraid they will end up with the bill.

Gabe Quintanilla, a lawyer for the city of San Antonio, refused to sign the non-coverage forms when he was told at least seven times this year that his 92-year-old mother’s physical and speech therapy would end because she was not improving following her hospitalization for a stroke.  One doctor predicted she would continue to decline and suggested hospice care.

“The only reason I was able to keep my mother’s therapy going is because I sent a copy of [the] Jimmo [settlement] to her doctor, her insurance company and the home care agency,” he said.   His mother has a Medicare Advantage plan, a private health insurance program that must also comply with the settlement.  He discovered it “by accident,” while researching legal options on the Internet.

His mother eventually left the hospital and received follow-up care at a nursing home before returning home. Despite the dire predictions, what began as maintenance therapy has led to unexpected, if slight, improvements.

In a video he posted on YouTube, he leans in close to share his prediction that the Spurs are going to beat Portland. And she smiles, pleased that her favorite basketball team won’t let her down.

“The Jimmo settlement saved my mother’s life,” he said.