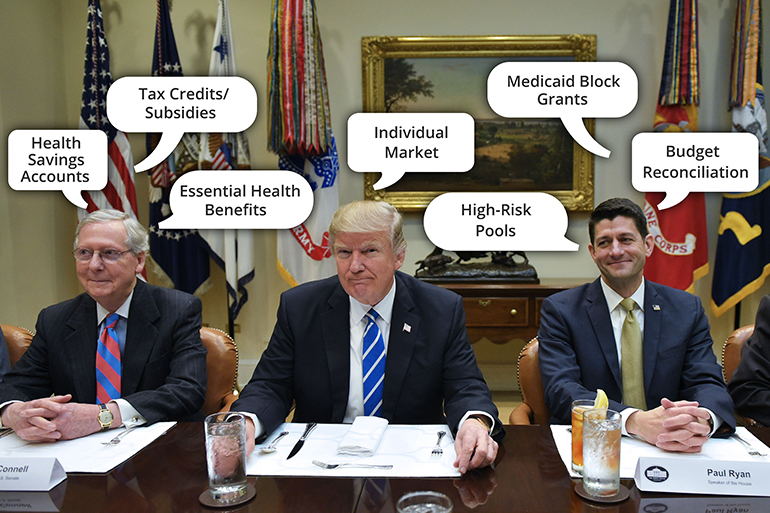 Have questions about the terminology being used in the debate over health care legislation? Click on the bubbles above to learn more. (Illustration by Lynne Shallcross; photo by Mandel Ngan/AFP/Getty Images)

President Donald Trump and many congressional Republicans campaigned on repealing the Affordable Care Act and replacing it with their own plan to overhaul the nation’s health care system. As the GOP develops its offering, its representatives are tossing around wonky health policy terms to describe their core strategies.

Below you’ll find some brief definitions. Click on the word bubbles in the photo above for KHN’s fuller translation of what each phrase means — for U.S. health care and for ongoing efforts to replace the ACA.

HEALTH SAVINGS ACCOUNTS: Also known as HSAs, these allow consumers to put money away on a tax-free basis as long as they use it for medical expenses. Learn more.

BUDGET RECONCILIATION: Legislative process that allows measures to pass with a simple majority in Congress. Budget reconciliation bills can’t be filibustered but must focus on provisions that have a budgetary impact. Learn more.

INDIVIDUAL MARKET: Where people who do not have health coverage through the government or their employer purchase a plan directly from an insurer. It is sometimes called the non-group market. Learn more.

HIGH-RISK POOLS: Insurance groups that cover individuals with high health insurance costs, such as people who have a past serious illness or a chronic condition. Learn more.

Do You Speak Repeal And Replace? Click Thought Bubbles For Translations