Until it happened to him, Itzhak Brook, a pediatric infectious disease specialist at Georgetown University School of Medicine, didn’t think much about the problem of misdiagnosis. 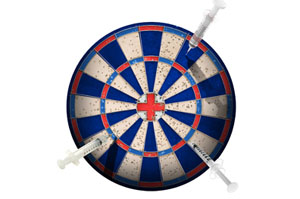 That was before doctors at a Maryland hospital repeatedly told Brook his throat pain was the result of acid reflux, not cancer. The correct diagnosis was made by an astute resident who found the tumor  —  the size of a peach pit  —  using a simple procedure that the experienced head and neck surgeons who regularly examined Brook never tried. Because the cancer had grown undetected for seven months, Brook was forced to undergo surgery to remove his voice box, a procedure that has left him speaking in a whisper. He believes that might not have been necessary had the cancer been found earlier.

“I consider myself lucky to be alive,” said Brook, now 72, of the 2006 ordeal, which he described at a recent international conference on diagnostic mistakes held in Baltimore. A physician for 40 years, Brook said he was “really shocked” by his misdiagnosis.

But patient safety experts say Brook’s experience is far from rare. Diagnoses that are missed, incorrect or delayed are believed to affect 10 to 20 percent of cases, far exceeding drug errors and surgery on the wrong patient or body part, both of which have received considerably more attention.

Recent studies underscore the extent and potential impact of such errors. A 2009 report funded by the federal Agency for Healthcare Research and Quality found that 28 percent of 583 diagnostic mistakes reported anonymously by doctors were life-threatening or had resulted in death or permanent disability. A meta-analysis published last year in the journal BMJ Quality & Safety found that fatal diagnostic errors in U.S. intensive care units appear to equal the 40,500 deaths that result each year from breast cancer. And a new study of 190 errors at a VA hospital system in Texas found that many errors involved common diseases such as pneumonia and urinary tract infections; 87 percent had the potential for “considerable to severe harm” including “inevitable death.”

Misdiagnosis “happens all the time,” said David Newman-Toker, who studies diagnostic errors and helped organize the recent international conference. “This is an enormous problem, the hidden part of the iceberg of medical errors that dwarfs” other kinds of mistakes, said Newman-Toker, an associate professor of neurology and otolaryngology at the Johns Hopkins School of Medicine. Studies repeatedly have found that diagnostic errors, which are more common in primary-care settings, typically result from flawed ways of thinking, sometimes coupled with negligence, and not because a disease is rare or exotic.

The problem is not new: In 1991, the Harvard Medical Practice Study found that misdiagnosis accounted for 14 percent of adverse events and that 75 percent of these errors involved negligence, such as a failure by doctors to follow up on test results.

Despite their prevalence and impact, such mistakes have been largely ignored, Newman-Toker and others say. They were mentioned only twice in the Institute of Medicine’s landmark 1999 report on medical errors, an omission some patient safety experts attribute to difficulties measuring such mistakes, the lack of obvious solutions and generalized resistance to addressing the problem.

“You need data to start doing anything,” said internist Mark L. Graber, founding president of the Society to Improve Diagnosis in Medicine and a leading errors researcher. Despite dozens of quality measures, Graber said, he is unaware of “a single hospital in this country trying to count diagnostic errors.”

In the past few years, a confluence of factors has elevated the long-overlooked issue. In his 2007 bestseller, “How Doctors Think,” Boston hematologist-oncologist Jerome Groopman vividly deconstructed the flawed thought processes that underlie many diagnostic errors, including several he made during his long career.

More recently, an influential cadre of medical leaders has been pushing for greater attention to the problem. They cite concerns about the growing complexity of medicine and increasing fragmentation of the health-care system, as well as relentless time pressures squeezing doctors and the overuse of expensive, high-tech tests that have supplanted traditional hands-on skills of physical diagnosis.

Publicity about the death last year of 12-year-old Rory Staunton, sent home from an emergency room in New York after doctors missed the raging systemic infection that quickly killed him, have put a human face on the problem. At the same time, new digital databases such as IBM’s Watson and Isabel promise to boost doctors’ accuracy, although their usefulness remains a matter of debate.

“One of the reasons it’s time to begin looking at it is that so many of the quality measures we use now assume that the diagnosis is the right one in the first place,” said Christine Cassel. A member of the panel that wrote the 1999 IOM report, she is now president and chief executive officer of the American Board of Internal Medicine.

But what if it’s not?

In a much-cited essay, Robert Wachter, associate chair of the Department of Medicine at the University of California at San Francisco, wrote that a hospital could earn “performance incentives for giving all of its patients diagnosed with heart failure, pneumonia and heart attack the correct, evidence-based and prompt care — even if every one of the diagnoses was wrong.”

Unlike drug errors and wrong-site surgery — mistakes that patient safety experts consider to be “low-hanging fruit” amenable to solutions such as color-coded labels and preoperative timeouts by the surgical team — there is no easy or obvious fix for diagnostic errors. Many are complex and multifaceted, and may not be discovered for years if ever, said Graber, a senior fellow at RTI International, a research firm based in Research Triangle Park, N.C.

“There is probably nothing more cognitively complicated” than a diagnosis, he said, “and the fact that we get it right as often as we do is amazing.”

But doctors often don’t know when they’ve gotten it wrong. Some patients affected by misdiagnosis simply find a new doctor. Unless the mistake results in a lawsuit, the original physician is unlikely to learn that he blew it — particularly if the discovery is delayed. While diagnostic errors are a leading cause of malpractice litigation, the vast majority do not result in legal action.

Some environments are more susceptible to error than others. Graber calls the emergency room “a petri dish” for diagnostic mistakes: The doctor doesn’t know the patient, the patient doesn’t trust the doctor, and time pressures and frequent interruptions are the rule.

Misdiagnosis is not limited to hospitals; a recent commentary on the Texas VA study by Newman-Toker and Martin Makary estimates that “with more than half a billion primary care visits annually in the United States . . . at least 500,000 missed diagnostic opportunities occur each year at U.S. primary care visits, most resulting in considerable harm.”

There is another reason such mistakes have been long ignored: They are regarded as an unusually personal failure in a profession where diagnostic acumen is considered the gold standard.

“This really gets to who we are as clinicians,” said internist Robert Trowbridge, who directs the medicine clerkship program for Tufts University medical students at Maine Medical Center in Portland.

“Overconfidence in our abilities is a major part of the problem,” said Graber, who believes doctors have gotten a pass for too long when it comes to diagnostic accuracy. “Physicians don’t know how error-prone they are.”

Many, he noted, wrongly believe that the problem is “the other guy” and that they don’t make mistakes. A 2011 survey of more than 6,000 physicians found that 96 percent felt that diagnostic errors are preventable; nearly half said they encountered them at least once a month.

In the Texas VA study, more than 80 percent of cases lacked a differential diagnosis, in which a doctor not only declares what he believes is ailing the patient but also lists other potential causes of the problem based on symptoms, test results and a physical exam.

“A differential helps people to cognitively focus,” said Hardeep Singh, director of the Houston VA Patient Safety Center of Inquiry. Failure to ask “What else could this be?” can cause premature fixation on the incorrect diagnosis, said Singh, the study’s lead author.

At Maine Medical Center, Trowbridge spearheaded a pilot program launched in 2010 to persuade doctors to anonymously report diagnostic errors, which would then undergo comprehensive analysis. He said he had to “hound” his colleagues to report mistakes. During the first six months, 36 errors that would otherwise have gone unreported were identified; most were deemed to have caused moderate to severe harm.

Trowbridge said the program has changed how he practices. “I’m much more reflective, much more attuned to the errors I’m prone to make. I work with checklists more.”

While second opinions are one strategy believed to reduce misdiagnosis, the original error may be the basis of a cascade of mistakes.

For nearly three years, beginning in February 2008, financial executive Karen Holliman logged more than 50 visits with various doctors in Durham, N.C., trying to get help for the increasingly severe fatigue that had plagued her for several years as well as back pain so excruciating that she wound up in a wheelchair.

Doctors variously told her she had fibromyalgia, chronic fatigue syndrome or a psychiatric problem. The real reason for her symptoms was metastatic breast cancer, which had riddled her spine, fracturing her back. Signs of cancer had been found on an MRI scan performed in February 2008. But a bone scan performed a few weeks later did not indicate cancer; her internist told her she did not have cancer, and doctors repeatedly failed to investigate the discrepancy.

Holliman has regrets: that she never got a second opinion from an internist or orthopedist, that she didn’t question the radiologists who performed her scans and that she failed to obtain her medical records earlier.

During meetings last year attended by her family, including a relative who is a prominent physician, as well as by her doctors and the hospital system for which they worked, Holliman said, a hospital lawyer called her case “a series of unfortunate events” but denied that the hospital was liable for the delayed diagnosis.

“I spent a lot of time being angry,” said Holliman, who is 52. She said she has not filed a malpractice suit because she was advised she was unlikely to win. “Now I’m just trying to live a really great life in the time I have left.”