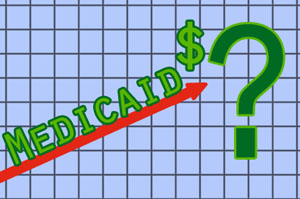 Starting Jan. 1, primary care doctors when treating patients on Medicaid, the state-federal health insurance program for the poor, will get the same rates they are paid when caring for seniors in the Medicare program. The higher rates will last for two years.

While Medicaid fees vary by state, they are generally far below Medicare and private plans. The change, which will cost $11 billion and will be paid by the federal government, means a 64 percent average pay increase, according to an Urban Institute analysis of the rates in 2010.

But implementing the raise is not so simple.

“The higher rate sounds great and was used by the Obama administration to sell the law, but the devil is in the details and we don’t yet have the details to go out and recruit doctors,” said J. Mario Molina, CEO of Molina Healthcare, one of the nation’s largest Medicaid managed care health plans with 1.8 million members.

With two months to go, doctors, state officials, and Medicaid managed care plans say there are numerous details still to be worked out.

The Obama administration has yet to issue final rules for the pay hike and most industry officials don’t expect one until after Election Day. In addition, some states have been hesitant to promote the provision because Republican presidential nominee Mitt Romney has vowed to repeal the health law if he is elected.

Among the unfinished operational details cited:

–It’s not completely clear which doctors can get the higher pay. Traditional primary care doctors, such as family physicians, internists and pediatricians, are assumed to be covered. But some specialists, such as pediatric cardiologists, also could be eligible if they provide a certain amount of primary care, according to a preliminary regulation released by the Department of Health and Human Services in May. There is also come confusion about what services are covered under the pay raise. The regulation said the raise will apply to “evaluation and management” of patients, not procedures or performing diagnostic tests.

–Medicaid managed care plans, which today enroll about half of the 60 million Medicaid recipients, are unsure how the additional compensation will be passed onto them and how they will compensate doctors paid a flat or capitated monthly fee.

–The federal government hasn’t published its Medicare rates for 2013 so states say they can’t tell doctors what the increases will be for Medicaid.

–Doctors are worried there is no deadline on when states have to reimburse them at the higher rates.

The confusion could undermine the goal of attracting more doctors to treat patients on Medicaid, which under the health law could gain as many as 17 million new enrollees starting in 2014, some experts say.

“This has tremendous implications for increasing access to primary care, especially in states like Florida and California, where Medicaid rates are very low, but only if it can be implemented properly and relatively soon,” Molina said.

The questions mean states have yet to start promoting the pay raise to doctors.

“It’s a difficult political environment to tout a provision like this in the Affordable Care Act as a recruiting tool,” said Andy Allison, Arkansas Medicaid director and chairman of the National Association of Medicaid Directors.

In a statement, the Centers for Medicare and Medicaid Services said: “Studies show that when states pay physicians higher rates under their Medicaid programs, more physicians participate.”

A report last year by the non-partisan Center for Studying Health System Change said the temporary nature of the pay raise could limit its effectiveness.

Rebecca O’Hara, a vice president of the Florida Medical Association, said doctors may be dismayed by the two-year limit. In Florida, she estimated the fee increase means a doctor would get paid $65 for a basic office visit rather than $32, but she added doctors fear having the higher fees revert back in 2015.

“Will we see physicians running to sign up for Medicaid because of potential for making money? I would say that’s unlikely,” she said.

Robert Hughes, president of the Medical Society of the State of New York, said most doctors won’t change their practices for a temporary rate hike and, as a result, Medicaid recipients will continue to rely on public health agencies and community health centers for care.

Ideally, states would have liked more time to implement the pay raise to widen its impact, said Tricia McGinnis, a director for the Center for Health Care Strategies, a nonprofit group consulting with several states on the issue. “Implementing something in two months will be tricky,” she said

A senior Obama administration official, who would only speak on condition of anonymity, downplayed the concerns and said the pay raise would take effect on time in January.

The official said most primary care doctors are aware of the pay raise and states and managed care firms can easily access current Medicare rates.

The controversy about the new payments has produced one interesting twist. A key motive for improving access to primary care doctors was to reduce Medicaid patients’ unnecessary use of expensive emergency rooms.

But emergency room doctors say they should qualify for the higher pay rates because many of their doctors provide primary care services, according to a letter from Dr. David Seaberg, president of the American College of Emergency Physicians, to CMS acting Administrator Marilyn Tavenner. “It has been the longstanding policy of CMS to provide for payment by the service-not by type of physician performing the service,” Seaberg stated.