Many doctors are disturbed they will be paid less — often a lot less — to care for the millions of patients projected to buy coverage through the health law’s new insurance marketplaces.

Some have complained to medical associations, including those in New York, California, Connecticut, Texas and Georgia, saying the discounted rates could lead to a two-tiered system in which fewer doctors participate, potentially making it harder for consumers to get the care they need. 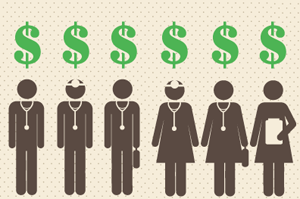 “As it is, there is a shortage of primary care physicians in the country, and they don’t have enough time to see all the patients who are calling them,” said Peter Cunningham, a senior fellow at the nonpartisan Center for Studying Health System Change in Washington D.C.

If providers are paid less, “are [enrollees] going to have difficulty getting physicians to accept them as patients?”

Insurance officials acknowledge they have reduced rates in some plans, saying they are under enormous pressure to keep premiums affordable. They say physicians will make up for the lower pay by seeing more patients, since the plans tend to have smaller networks of doctors.

But many primary care doctors say they barely have time to take care of the patients they have now.

The conflict sheds light on the often murky world of insurance contracts in which physicians don’t always know which plans they’re listed in or how much they’re being paid to treat patients in a particular plan. As a result, some doctors are just learning about the lower pay rates in some plans sold in the online markets, or exchanges

“If you’re a physician and you’ve negotiated a rate from insurance, shouldn’t it be the same on or off the exchange?” said Matthew Katz, executive vice president of the Connecticut State Medical Society. “You’re providing the same service.”

Blues: No Desire ‘To Gouge’ Docs

A senior executive at Blue Cross Blue Shield Association said some of its 37 member organizations — each of which operate independently and offer a variety of plans – are offering lower rates to physicians in smaller exchange plan networks.

But, she said, plans know that a good network of providers is essential or customers “will go someplace else,” and they are enlisting sufficient numbers of doctors.

“We’re not motivated to gouge the doctor,” said Kim Holland, Blue Cross Blue Shield Association executive director for state affairs. “We depend on good relationships with quality physicians. … I can’t imagine any product we offer is going to have a physician rate that would discourage them from seeing a patient.”

But some physicians see things differently. Contracts between insurers and doctors vary with some allowing insurers to adjust rates unilaterally or to assign a doctor to multiple plans.

“I’ve participated with Oxford since 1985. They don’t send me a contract every year to sign. They don’t send me the rates. You don’t know the rates,” said Dr. Paul Orloff, a physician who is president of the New York County Medical Society. “It’s the only game in town so you sign. They have a right to unilaterally change the rates at any time during the contract.”

The benchmark for physician fees is the rate the federal government sets for services provided to older Americans through Medicare. In many markets, commercial plans may pay slightly above the Medicare rates, while doctors say that many of the new exchange plans are offering rates below that.

Physicians are uncomfortable discussing their rates because of antitrust laws, and insurers say the information is proprietary. But information cobbled together from interviews suggests that if the Medicare pays $90 for an office visit of a complex nature, and a commercial plan pays $100 or more, some exchange plans are offering $60 to $70. Doctors say the insurers have not always clearly spelled out the proposed rate reductions.

Some experts minimized the impact of lower pay rates on enrollees.

People “may experience wait times to get in, but that is not unique to people in exchange plans,” said Sara Rosenbaum, a professor of health law and policy at George Washington University,

Rosenbaum said she was not overly concerned about physicians’ compensation. “I don’t mean to suggest that physicians don’t deserve to do well,” she said. “But physicians are very well-compensated people, no matter what.”

Many doctors say they have not decided if they will participate in the new plans –in some cases, even when an insurer is including them in their provider list.

A survey by The Medical Society of the State of New York found that 40 percent of more than 400 physicians who had responded so far said they chose not to participate in a health insurer’s exchange plan, and one-third said they did not know whether they were participating or not.

Two-thirds indicated they had received no information about reimbursements; of those who did ge that information, “a significant majority indicated that the reimbursement generally was well below what the insurer pays in other contracts,” according to a statement from the society’s president Dr. Sam Unterricht.

“I have patients calling my office and saying … ‘Oh good, I see you’re in the network,’” said Patricia McLaughlin, an ophthalmologist in New York City. But, she added, “I’m not sure I am or am not at this point.”

Some insurers have contractual arrangements with physicians that allow them to automatically include doctors in a new plan, unless the physician requests to opt out in writing, according to Mike Scribner, CEO of Strategic Healthcare Partners, a health care consulting firm based in Savannah, Ga., that represents about 700 physicians and 30 managed care hospitals in the state.

Doctors say the Blue Cross Blue Shield Association plans have generally been more straightforward about the discounted rates –and some doctors who had the opportunity to “opt out” of their exchange plans did so.

Dr. Richard E. Thorp, an internist who is president of the California Medical Association and heads a physician-owned multi-specialty primary care group in Paradise, Calif., said one plan sold on that exchange “was going to pay us significantly less for doing that business. And we are already very busy.”

His practice delayed signing a contract, he said. But about three weeks ago, the group was informed the insurer was short on physicians and was therefore including doctors from other plans at their old rates.  So his practice was included at the higher rate.

Advocates say that consumers should be wary of information in plan directories and confirm participation with their doctors.

“There shouldn’t be any ambiguity about who’s in the network,” said Lynn Quincy, a senior analyst with Consumers Union, the policy division of Consumer Reports.

“These consumers are buying a product, one dimension of which is to provide a network–a very important dimension.”

Doctors Complain They Will Be Paid Less By Exchange Plans