For doctors, hospitals and insurance companies, all the complexities of medicine get boiled down into a system of codes.

These codes are used to track and pay for every procedure – like an 813.02 for mending a broken forearm, or an 800.09 for treating a concussion. But this coding system is now four decades old, and it doesn’t meet the needs of the medical system today. It was scheduled to be upgraded this October, but Congress delayed it last week. JaeLynn Williams, for one, is seriously bummed out.

“It’s kind of like looking forward to Christmas, and it doesn’t come,” she says.

Williams and her company, 3M Health Information Systems, are helping about 5,000 hospitals upgrade from the old coding system, called ICD-9, to the new one, ICD-10. It’s a $100 million project for 3M Health. Williams says the upgrade is critical because it will give doctors, hospitals, researchers and insurance companies better data – which will allow them to zero in on the best, most cost-effective treatments. 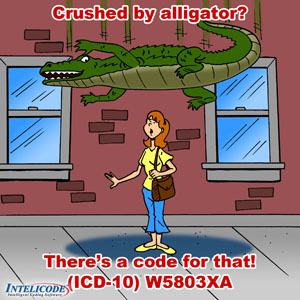 For that, health care needs to upgrade to ICD-10, and everybody needs to make the transition at the same time for it to work. The White House has been trying to coordinate that for the last five years. But some doctors in smaller practices welcome the delay, like Eric Novack, an orthopedist in Phoenix.

“It’s good news for us because there are enough challenges going on now with things changing in health care,” he says.

For Novack, upgrading to the new coding system means all 10 doctors in his practice have to take a couple of weeks off from seeing patients to learn how to use it. And support staff needs expensive training, too.

“We can put that on hold, and not have to worry about having to spend that big chunk of money at this time,” he says.

Doctors and small hospitals are already struggling with big IT challenges beyond the ICD-10 upgrade, like just implementing electronic health records in the first place, says Joe Lavelle, a health information technology consultant.

But big hospitals and insurance companies have invested heavily in being ready to switch to ICD-10 six months from now.

They’ve already sunk millions into re-training staff, and many have started testing the new systems in anticipation of the October 2014 deadline. After all, the Department of Health and Human Services was calling that date solid as recently as February.

And HHS didn’t ask Congress for the delay, it was part of a political compromise. Congress pushed back the deadline, which many doctors wanted, at the same time it passed a major Medicare bill that doctors didn’t like.

3M’S Williams says her clients worry that the delay will make upgrading harder in the future.

“I think the biggest issue with the delays is the lack of trust that any new deadline will be held to,” she says.

In a written statement to NPR, HHS says it is studying Congress’ action, and “will provide guidance” on a new deadline for the coding upgrade “soon.”

Doctors’ Billing System Stays Stuck In the ’70s For Now