When my mother, Pauline, was 70, she lost her sense of balance. She started walking with an odd shuffling gait, taking short steps and barely lifting her feet off the ground. She often took my hand, holding it and squeezing my fingers. 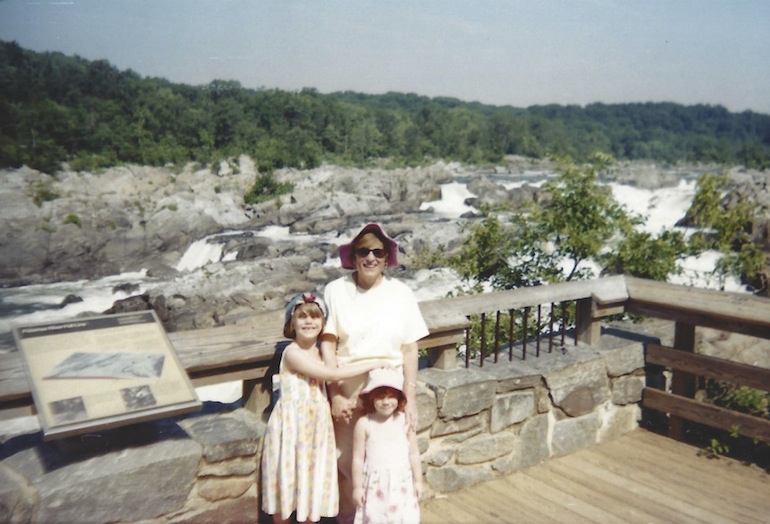 Her decline was precipitous. She fell repeatedly. She stopped driving and she could no longer ride her bike in a straight line along the C& O Canal. The woman who taught me the sidestroke couldn’t even stand in the shallow end of the pool. “I feel like I’m drowning,” she’d say.

A retired psychiatrist, my mother had numerous advantages — education, resources and insurance — but still, getting the right diagnosis took nearly 10 years. Each expert saw the problem through the narrow prism of their own specialty. Surgeons recommended surgery. Neurologists screened for common incurable conditions.

The answer was under their noses, in my mother’s hunches and her family history. But it took a long time before someone connected the dots. My mother was using a walker by the time she was told she had a rare condition that causes gait problems and cognitive loss, and is one of the few treatable forms of dementia.

“This should be one of the first things physicians look for in an older person,” my mother said recently. “You can actually do something about it.”

‘Did Mom Tell You? She Fell Again.’

The falls started in 2004. My mother fell in the bedroom of her Bethesda home. She fell in the airport while returning from a trip to see my sister. Sometimes she told me, and sometimes a sibling would call or e-mail. “Did Mom tell you? She fell again.”

Millions of older adults fall every year, but it was my mother’s uneven gait that tripped her up. She was unsteady on her feet; the slightest incline threw her off stride. Sometimes she quickened her pace involuntarily. Sometimes she bent over before straightening back up.

She went to doctor after doctor. “I want a diagnosis,” she would say before the next appointment with a neurologist, geriatrician, urologist or orthopedist. “I’m convinced this is something organic — that it has an underlying biological cause.”

A series of neurological evaluations ruled out the obvious suspects: My mother didn’t have the tremor typical of Parkinson’s, a devastating, progressive disorder, and she did well on cognitive tests, so it wasn’t Alzheimer’s disease.

Next, my mother went to see an orthopedic surgeon. He said she had stenosis, or a narrowing of the open spaces of the spine, and recommended surgery. She underwent a complicated, potentially dangerous back operation, and she seemed to be walking more smoothly afterward — for a few months.

As time went by, though, she developed other symptoms. Perhaps because she wasn’t exercising, her blood pressure went up. She gained weight and was at risk for diabetes. She developed a persistent hacking cough, but no one could identify the cause since her lungs were clear.

She was also having trouble getting to the bathroom on time, so she had more surgery, this time to implant mesh designed to alleviate urinary incontinence. Medicare and private insurance picked up the tab, but once again the relief was temporary.

The bad news was that it had taken so long to get the diagnosis that some of the damage may be irreversible.

My mother had always been terrified she would lose her memory. Her mother, Helen, who died in 1988, had spent the last five years of her life bedridden, unable to walk and oblivious to her surroundings. Any physician who took a careful family history would know that my mother suspected Helen’s dementia was caused by normal pressure hydrocephalus, or NPH, a buildup of cerebrospinal fluid in the brain that causes difficulty walking, urinary incontinence and cognitive loss, in that order.

When my mother met with specialists, she floated the idea that she might have NPH. In some ways, she hoped that was the diagnosis, because it often can be treated by implanting a small shunt into the brain to drain off the excess fluid.

Around this time, another neurological evaluation that included MRI scans of the brain revealed that my mother had enlarged ventricles. Ventricles are the cavities in the brain that are filled with cerebrospinal fluid, and their enlargement suggested any number of conditions, including brain atrophy and Parkinson’s. They are also considered a red flag for NPH.

A neurologist in Bethesda had briefly considered NPH. He had done a spinal tap to withdraw a small amount of cerebrospinal fluid but ruled out the diagnosis when he saw no immediate improvement in my mother’s gait. But he may not have withdrawn enough fluid to see a change, experts told me.

One feature of NPH is passivity. My mother was forgetful at times, but what was more striking was her lack of initiative.  She didn’t make plans as she used to. She’d start a knitting project and drop it. She may have been less aggressive than normal about pursuing her hunch about NPH being the source of her trouble. “One doctor told me, ‘This doesn’t run in families,’ ” she said.

Two years ago, doctors finally got it right.

My mother and stepfather had gone to visit friends in Gainesville, Fla. They urged her to make an appointment at the University of Florida’s Center for Movement Disorders and Neurorestoration.  Doctors there suspected NPH as soon as they saw my mother walk across the room. They recognized the shuffling gait and what they call “magnetic” footsteps that seemed glued to the floor.

They sent her for additional tests, including a spinal tap to see if her walking improved after a large amount of cerebrospinal fluid was withdrawn — it did — and another imaging scan to rule out the possibility that the buildup was caused by an obstruction, such as a tumor. 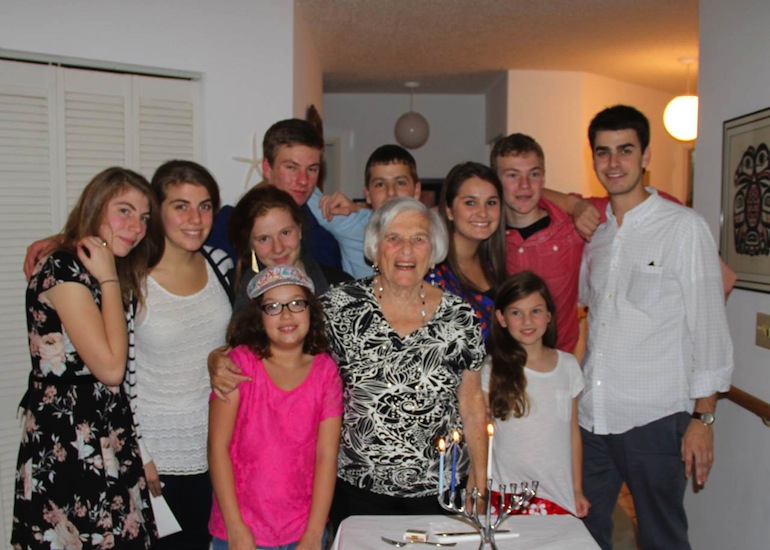 Pauline Rabin surrounded by her grandchildren at her 80th birthday after her operation (Rabin Family Photo).

Inserting a shunt is a dangerous operation: A thin tube is implanted in the brain to drain excess cerebrospinal fluid and release it into the abdomen.

“For some patients, [the surgery] can be life-changing,” said Michael Okun of the movement disorders center. But it is a high-risk operation, he said, especially in the elderly.  About a third of patients who have shunt surgery experience a complication, such as an infection or a brain bleed that can lead to brain damage or death. “You have to be careful. A lot of people are shunted inappropriately,” Okun said.

Why was my mother’s diagnosis missed by so many, and for so long?

A friend whose mother was diagnosed with NPH by a gerontologist early on in the course of her disease told me the doctor made the diagnosis after seeing a story about NPH on “60 Minutes.”

But for many physicians, “the possibility just doesn’t come to mind,” said Michael Williams, who serves on the medical advisory board of the Hydrocephalus Association, an advocacy organization, because it’s so rare.

Physicians are trained to search for the most obvious, common conditions first. Although NPH was first described in 1965 and is taught in medical schools, the diagnosis is controversial, even contentious. There is no definitive test, and some experts have questioned whether it is a real syndrome. Studies of patients who had shunts inserted have had mixed results, and randomized controlled studies will probably never be done, both for logistical and ethical reasons.

Daniele Rigamonti, a neurosurgeon at Johns Hopkins School of Medicine who wrote and edited a textbook about NPH, is convinced that it is underdiagnosed and that many nursing home residents who seem to have Alzheimer’s or Parkinsons’ dementia may actually have NPH.  He says it’s important to diagnose it early, before the buildup of pressure on the brain causes damage as the enlarged ventricles displace and compress adjacent brain tissue.

“To wait for the full triad [of symptoms] is foolish,” he said, referring to the three symptoms that define NPH: gait disturbance, incontinence and dementia. Even though it is a challenge to diagnose NPH when the only symptom is gait impairment, he said, “you don’t wait for a cancer to metastasize and spread to the brain before you recognize it.”

Bryan Klassen, an assistant professor of neurology at Mayo Clinic, is not convinced. He contends NPH is extremely rare and is not being missed.

“We believe it’s overhyped,” he said, adding that the surgery is dangerous, “and a lot of the time the results are underwhelming.”

My mother had shunt surgery two years ago, when she was 79 years old. The surgery lasted less than an hour and a half. I’m only writing about it now because surgical interventions, like sugar pills, can have placebo effects that don’t last very long. But I noticed a change immediately.

My mother went home the day after surgery, and my stepfather brought flowers. And then my mother did something that she hadn’t done in years: She walked over to the kitchen counter, gently removed the flowers from the paper wrapping, clipped and cut the stems and arranged them in a vase in a striking arrangement. She had always had a flair for flower arranging but hadn’t seemed interested for quite a while.

Today she is dramatically improved; her walking, memory and concentration are all better. Still, I can’t help wondering: Did the delayed diagnosis result in some permanent cognitive impairment?

She’s much less passive and can actually be very persistent. She asked me to write this article to inform people about NPH. “Have you written the article yet?” she asked recently when I called. “Please, write it.”

Some Dementia Can Be Treated, But My Mother Waited 10 Years For A Diagnosis