It was a fourth of July weekend but Sharon O’ Brien, an intensive care physician, was not celebrating. A medical error earlier landed a patient in her ICU. The patient eventually died — and she had to decide what to tell the patient’s family.

Should she apologize? How much detail should she share about the mistake? Would a frank discussion put the hospital at risk of a lawsuit?

“I had never really been in that situation before,” said O’Brien, recalling the 2004 incident. She decided to tell the patient’s family about the error, bracing herself to face their anger. While the family was stricken by grief, they appreciated her honesty.

“I spent a lot of time with the patient’s family supporting them and explaining what had happened, and yet I felt so unsupported in that experience,” said O’Brien, a physician at MedStar Georgetown University Hospital.

Hospitals have traditionally been reticent to disclose to patients or their family members the specifics of how a medical procedure didn’t go as planned for fear of malpractice lawsuits. In recent years, though, many are beginning to consider a change. Instead of the usual “deny-and-defend” approach, they are revamping their policies to be more open.

To help them move in this direction, the federal Agency for Healthcare Research and Quality released in May an online toolkit designed to expand the use of the agency’s “Communication and Optimal Resolution” process, which establishes guidelines for adopting more transparency in communicating adverse events.

Hospitals’ interest in this approach has been fueled by studies showing that patients want to know when an adverse event has occurred and doctors suffer from anxiety when there are restrictions and concerns about what they are allowed to discuss. Some studies have found that patients are more likely to sue when they perceive that there is a lack of honesty.

MedStar Health, which is among the largest health providers in Maryland and the Washington, D.C. region, has been one of the pioneers in setting up such programs at all of its 10 hospitals. In 2012, it launched standardized program based on AHRQ’s guidelines across the system that drew on similar initiatives that were already in place at its various facilities. O’Brien was one of the first to sign up as a volunteer at Georgetown University Hospital.

The initiative established a standardized approach for physicians when they have to communicate with patients and family members about adverse events. A team of physicians — called the “Go Team” — complete a four-hour initial training program and then annual booster courses every six to eight months to prepare them for these conversations and also to help other staff physicians who confront the problem. After that, Go Team members are on call 24/7 to provide guidance. Another program, “Care for the Caregiver,” provides psychological support to other physicians as needed.

One of central elements of the training program for the Go Team involves role-playing exercises with professional actors who simulated patient scenarios. O’Brien remembers clearly one session when she had to confront actors portraying patient’s family almost hysterical with anger. The patient had suffered from severe burns due to a fire in the operating room.

“It’s scary to be in that room even though I knew it was a simulation,” she said. It was helpful, “in terms of preparing for the family’s emotions … and making sure they get the information that is needed while acknowledging that they needed to express their emotions.” 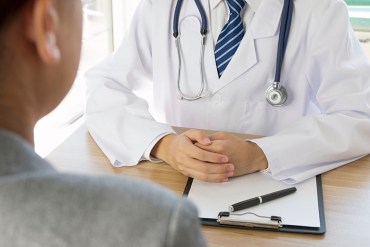 The exercises are uncomfortable and incredibly personal, O’ Brien said. Through the training sessions, she learned about the importance of being honest upfront, expressing empathy and apologizing.

MedStar is not the only hospital system implementing the system. Since 2012, second-year medical students at Johns Hopkins University are required to learn how to disclose adverse events in their patient safety classes by participating role-playing exercises. Several Harvard teaching hospitals also have coaching models similar to MedStar’s.

Part of the motivation for David Mayer, vice president of quality and safety for MedStar Health, to establish open communication programs came from his personal experience about a decade ago when he was the co-executive director at the University of Illinois Institute for Patient Safety Excellence. Back then, he and his colleagues were frustrated with the tension between doctors, patients and the amount of lawsuits the hospital had to field from patients who wanted to know more.

“We felt horrible that we couldn’t openly talk to patients and families … our attorneys would tell us we can’t do that because we’re going to give them all the information that will cause us to lose a lawsuit,” he said. “There were no winners.”

After a colleague brought the issue to the attention of that hospital’s board, they began working on a better system, said Mayer, who participated in the development of AHRQ’s guidelines. And when Mayer arrived at MedStar he continued working on this mission. The results he has seen reflect a hospital culture shift.

“Instead of shutting down conversations with patients, we want to respond to them immediately, we want to share everything we can with them,” Mayer said. “Many times when they get their questions answered in an open and honest way, they realize a lawsuit wasn’t really necessary.”

Mayer said by emphasizing transparency and creating an open environment, the doctors have been able to learn from past events and improve their performance. At MedStar Health, he has seen a 60 percent reduction in serious safety events in the past four years.

But the openness also has a cost. The hospital might have to pay for remedies, such as waiving medical bills, if a patient believes the hospital was at fault.

Mayer recognizes that there are still many hospitals who go by the “deny and defend” approach.

“There are programs that say they’re doing it when they’re not really doing it, they’re not waiving bills, they’re still charging the Centers for Medicare & Medicaid Services and third party payers for the mistakes,” he said. “There are a lot of people making money off denying what is technically right for the patient.”

KHN’s ‘What the Health?’: Dems Agree to Agree, But Not on What to Agree On