New York lawyer Brett Stark, who has worked with dozens of unaccompanied Central American children who crossed into the United States in the past year, says getting the courts to grant these kids asylum is extremely difficult. So he often turns to a special advocate — a doctor.

Such medical-legal partnerships have cropped up in New York and California, where thousands of unaccompanied minors have settled with their families or friends who were already in the U.S.

One child in New York, a teenager from Honduras, carried a mark of his country’s gang violence in his back—a bullet lodged in the middle of his spine.  He ended up in the Bronx, where his immigration case was taken up by Stark, who works with the Immigrant & Refugee Division at Catholic Charities New York. Asylum cases are among the most difficult immigration status cases to win, Stark says, and a doctor’s testimony can help sway the decision.

“I could say to the judge, ‘Your honor, this child is fleeing gangs in his home country and because of that, he’s eligible for asylum,’” Stark explains. “But what’s more powerful and has more impact is to say, ‘Here’s a letter from Dr. Alan Shapiro, where he reports this child has a bullet lodged in his spine in the L6 region.’ And the judge can look at this and say, ‘This corroborates what you’re saying, and we can put this in a legal context.’” 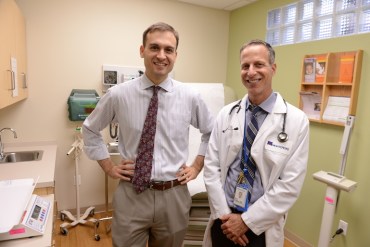 With testimony from Shapiro, a pediatrician and senior medical director of South Bronx Health Center, a program of Montefiore and The Children’s Health Fund, the judge granted the Honduran teenager a special visa for victims of crimes, another immigrant classification allowing the boy to stay in the country legally.

As 68,000 unaccompanied minors crossed the border between October 2013 and September 2014, controversy erupted over whether they should be allowed into the U.S. or sent back to their home countries of Guatemala, Honduras, and El Salvador. One concern was whether the children might bring infectious diseases across the border.

In July, Republican representative Phil Gingrey, from Georgia, wrote a letter to the director of the Centers for Disease Control and Prevention expressing concern about “reports of illegal migrants carrying deadly diseases such as swine fly, dengue fever, Ebola virus, and tuberculosis.”

But Shapiro says infectious disease hasn’t been an issue for the unaccompanied minors who come to his clinic. They need standard primary care like any child, such as vaccinations before they can start school.

The problems he sees have much more to do with the physical and emotional scars the children bear from the violence in their home countries and the long trek to the United States.  Many suffer from depression, anxiety, adjustment disorders, and post-traumatic stress disorder.

“They’re in a highly alert, anxious state,” Shapiro says. “Many kids have witnessed the murders of their relatives and had threats on their own lives.”

Often, those are the very factors that could help the children get permission to stay in the U.S., but they can be difficult to demonstrate in a courtroom. Having medical testimony from a doctor, Shapiro says, “greatly bolsters the case.”

For cases involving emotional trauma, the bulk of the evidence may come from a psychologist.  The lawyer can try to describe the trauma, Stark says, but it’s much more effective for a psychologist to contribute testimony that the child presented with symptoms consistent with PTSD or other trauma.  “A psychologist’s contribution can be very moving and vital,” Stark says, especially when a child is unable to speak for himself.

But Mark Krikorian, executive director of the Center for Immigration Studies, a think tank in Washington that favors tighter immigration controls, warns that emotional trauma is not cause for asylum. To be granted asylum, immigrants must be able to prove that they fear persecution in their home countries based on race, religion, nationality, membership in a particular social group, or political opinion.  “That doesn’t apply to these kids,” Krikorian says.

“What I fear is that this kind of testimony will be designed to elicit sympathy so that immigration authorities grant a green card whether or not it’s warranted under the law,” he adds. “Even the majority of those who do get asylum really don’t warrant it.”

From October 2013 to June 2014, 1,532 unaccompanied minors applied for asylum in the U.S. The United States Citizenship and Immigration Services (USCIS), one of two government agencies that hear asylum cases, adjudicated 167 such cases during that period. Of those cases, 108 of the children were granted asylum.  Many unaccompanied minors have applied for other categories of protection that allow them to stay in the country. 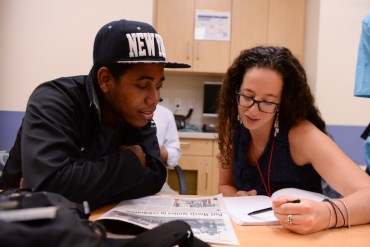 Terra Firma Coordinator Jenny Ajl reads with participant Yorby Lino at The Center for Child Health and Resiliency on Prospect Ave in the Bronx (Photo by Mark Bonifacio).

Meanwhile, from July 18, 2014 to October 7, 2014, immigration judges ordered 1,252 unaccompanied children deported, according to the Executive Office for Immigration Review, part of the Department of Justice. Often, those orders are appealed.

Many unaccompanied minors across the country do not have access to an attorney: The government is not required to provide legal representation in immigration court to children who aren’t citizens, and few can afford to hire an attorney.

In the Bronx, Shapiro and Stark are trying to serve as many of the 433 unaccompanied minors who have settled in the borough as they can. They’ve named their medical-legal clinic Terra Firma, where they have seen about 50 unaccompanied minors since October 2013; they hope to help 200 more in 2015.

“The reason we’re pediatricians is that we’re looking out for the well-being of the child,” Shapiro says. “These are very vulnerable children who have needs that go above and beyond the other children you might see.”

Every other week, dozens of them file into the South Bronx Children and Family Health Center for Terra Firma. For two-and-a-half hours, the clinic provides health care, counseling, case management, and legal services for the children.  Both pediatric and mental health care are available in Spanish, which can be hard to find elsewhere in the city.

As part of the New York Immigration Coalition, Shapiro has been working with the New York City health department to develop a health alert for all pediatricians detailing the medical needs for unaccompanied children, and how best to help them. 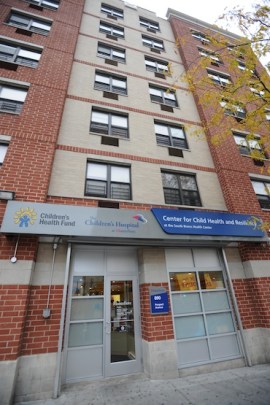 The Center for Child Health and Resiliency on Prospect Ave in the Bronx provides culturally-appropriate health care, counseling and legal services for the undocumented children (Photo by Mark Bonifacio).

So far, the Terra Firma model appears to be a rarity, but something similar is taking shape in California. Los Angeles has received 2,474 unaccompanied minors from January through September of 2014. Elena Fernandez, behavioral health director of St. John’s Well Child and Family Center, says psychologists at the clinic are being asked to provide psychological assessments for use in immigration hearings.  Other times, their job is to help children testify themselves and prepare for what may arise during a hearing.

“It’s the clinician who has to determine whether the child is ready to testify and disclose in a hearing the level of trauma. Because you run the risk of them re-experiencing that trauma in a courtroom,” Fernandez says.

St. John’s has seen more than three times as many undocumented kids this fall as they did at the same time last year.  Most of them, CEO Jim Mangia believes, are unaccompanied minors.  The additional visits, most of which were pro bono, he says, have cost his clinics about $250,000 over a three-month period.

“This is a humanitarian crisis, a refugee crisis,” Mangia says. “These children have been kidnapped, brutalized, beaten, raped, sexually abused, and that’s why they’ve fled in the first place. … There’s just a tremendous amount of trauma.”