When employee John McNally needed a knee-replacement operation, Alpha Coal West offered to pay his travel expenses if he would have the surgery in Fort Collins, Colo., a five-hour drive from his home near Gillette, Wyo.

The Colorado surgery center had data showing good results with such operations, and it charged far less than the hospital in Gillette. Despite feeling “every bump on the way back,” McNally was so pleased with the outcome of the operation that he returned to Colorado a few months later to have his other knee done.

Forget about traveling to Thailand or India for low-cost surgeries. More employers and insurers are offering financial incentives to encourage workers like McNally to consider “domestic medical travel.” 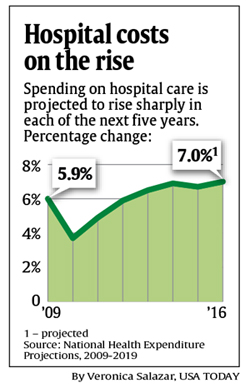 By steering workers to facilities with high-quality care and lower prices, employers say they can reduce their costs 20 percent to 40 percent – more than enough to cover the travel expenses.

A lot is at stake. Hospital care accounts for more than one-third of the nation’s $2.5 trillion annual health spending tab. And spending on hospital care – which rose nearly 6 percent last year – is expected to accelerate, government data show, driven both by increased use and rising prices. Employers with domestic travel programs say they save money in part by negotiating a single rate, which includes the fees for surgeons, anesthesiologists and all medical care up until the patient is discharged.

“This is one of our ways of trying to bend the cost curve,” says Bob Ihrie, senior vice president in charge of employee programs at Lowe’s. The national home-improvement retailer has a three-year deal with the Cleveland Clinic to send willing employees and their dependents there who need treatments such as open-heart surgeries, valve repairs and pacemakers. Lowe’s, which like most large employers is self-insured, may add orthopedic surgeries to its travel program, Ihrie says. Four other large employers – including an airline and a bank – are in a coalition with Lowe’s that may soon announce similar agreements with medical providers, he says.

If domestic medical travel catches on, particularly among large employers, the movement could help drive down costs and improve quality of care, Ihrie says. It could shake up the hospital industry by fostering “a truly national competition,” says consultant Jim Unland of the Health Capital Group in Chicago.

The move by Lowe’s – along with growing interest in domestic medical travel by other employers – comes amid scrutiny of the role hospital prices and their market clout play in rising health insurance premiums, along with wider awareness that medical costs and quality can vary dramatically between hospitals and across regions.

Employers and insurers have long sent patients to “centers of excellence” for organ transplants and other complex procedures. But domestic travel is moving beyond that to offer more types of medical care, including back and cardiac-bypass surgeries, and even relatively minor treatments, such as repairs to knee cartilage. Some companies are even providing financial incentives to workers.

Among the firms promoting domestic travel:

— Alpha Coal West, McNally’s employer, says its medical costs have remained flat – even as spending nationwide has risen – since its 2001 decision to offer medical travel to its Wyoming workers and their families. A division of Alpha Natural Resources, the nation’s third largest coal-mining firm, Alpha Coal offers travel to Fort Collins; Billings, Mont.; Rochester, Minn.; and Houston for medical care related to orthopedic problems, cancer and other difficult diseases.

— BridgeHealth Medical, based in Greenwood Village, Colo., began offering domestic travel programs to small and midsize employers last year. The firm links workers to a network of about 20 hospitals and surgical centers in the U.S., where it has negotiated prices for orthopedic, cardiac and other types of surgery.

— The Health Services Coalition, a group of 24 employers and unions in Las Vegas, warned in May that its member organizations might send some of their 260,000-plus employees and dependents to hospitals in Utah or California unless local hospitals provide plans to improve quality of care and reduce costs.

Still, the domestic travel movement faces challenges. It could backfire, Unland says, if employers and insurers focus solely on cost, rather than quality. While most programs are voluntary, large financial incentives can blur the line between choice and necessity. Medical providers have balked at making their discounts public. And it isn’t clear how many workers are willing to travel long distances, particularly those with young children.

“Never mind sending them to India, they don’t even want to go to Oklahoma,” says Rick Baker, president and CEO of North American Surgery, a Vancouver, Canada-based firm that negotiates discounted surgeries in the USA for individuals who don’t have health insurance. While uninsured people are willing to travel, workers with insurance are less likely to hop on an airplane, he says.

Some Insurers Not On Board

Insurers also can be reluctant to encourage domestic travel. Lowe’s Ihrie says he asked the insurers who administer benefits for his firm’s 125,000 employees to develop ways for workers to determine the best hospitals for cost and quality. Years went by without the insurers taking action. “So we went out and did it ourselves.”

So did Alpha Coal. It hired retired surgeon David Crowder to research options outside its local area for some types of care, says Michael Peelish, executive vice president at Alpha Natural Resources.

Using data from Health Grades, a publicly traded hospital-ratings firm, and other sources, Crowder looked into the quality of care at facilities around the country: “It was really about looking for the best in breed,” Crowder says. Alpha negotiated rates for specific treatments with medical centers on Crowder’s list, including Orthopaedic & Spine Center of the Rockies in Fort Collins, where McNally went.

Alpha Coal’s insurance program reduces co-insurance payments from 20 percent down to 10 percent for workers willing to travel. It also covers hotel and travel costs for employees and their spouses or partners.

“I would have probably been in a wheelchair by now if I hadn’t done the surgeries,” says McNally, a welder who returned to work for two years after his surgeries in 2007. He is now retired and has no problem with his company saving money on his care.

Savings result not only from lower prices but from fewer complications with procedures done at high-quality centers, Crowder says. Some follow-up care, including physical therapy, is provided in Gillette.

In fact, all the travel-for-surgery programs offer emergency follow-up care for patients. If any worker who travels for surgery has a complication or other urgent problem after returning home, that treatment is provided at the local hospital and covered under the company’s regular insurance plan, the companies say.

In Lowe’s case, the company negotiated flat-rate fees with the Cleveland Clinic for complex cardiac procedures. Lowe’s is not charged extra if a patient is re-admitted to the clinic for care resulting from the surgery. But Lowe’s agreed to make additional payments for patients whose medical needs are so complex that they exceed normal ranges, such as a patient who might have multiple problems. Even those cases show savings, Ihrie says.

Already, one Lowe’s employee had three complex heart procedures while hospitalized under the new program, Ihrie says. Lowe’s asked benefit firm Mercer to calculate the cost of those procedures if they were done under the company’s standard insurance plan. Mercer estimated $531,000. Under the agreement with the Cleveland Clinic, Lowe’s paid $469,000, Ihrie said.

Less Costly For Employees, Too

To encourage workers to use the program, Lowe’s waives deductibles and covers their travel and hotel costs. Those savings made the decision a no-brainer for Tony Reynolds, an eight-year employee based in Dover, Del., who needed mitral-valve surgery. Reynolds, 50, knew the company would waive $5,000 in deductibles and he’d save in other out-of-pocket costs if he went to Cleveland, and that the company would cover travel costs for him and his wife. Reynolds, who had his surgery last week, has been discharged from the hospital, is staying at a local hotel, and is scheduled to fly home Thursday.

Simpler treatments are also covered under some work-based travel programs.

Barry Yontz, 58, a sales manager in Rockton, Ill., flew to Southern California for outpatient arthroscopic surgery to repair cartilage in his knee. BridgeHealth arranged the trip. Even after paying for travel and hotel costs for him and his wife, the insurance company “saved almost $3,000” compared with a similar surgery he had the previous year near home, Yontz says.

Nationwide, it’s hard to quantify how many employers are embracing domestic medical travel – or how much money they’re saving, says Paul Keckley, executive director of the Deloitte Center for Health Solutions, who has studied medical travel extensively.

Employers who are going to send patients “hundreds or thousands of miles” for care need to evaluate whether “the outcomes are truly, dramatically better,” says consultant Peter Hayes with Health Care Solutions in Scarborough, Maine, whose clients include employers, drug companies and other industry players.

Most major metropolitan areas have an “outstanding hospital” nearby, says Victor Lazzaro, CEO of BridgeHealth. “Their outcomes are fabulous, and they have excess capacity.”

Domestic travel is “slowly catching on,” says Hayes, whose last job was heading employee benefits for supermarket chain Hannaford Bros. in Scarborough. Three years ago, the company began offering its 27,000 workers the option of going overseas for some expensive surgeries. No one went because local hospitals lowered their prices in response.

James Caillouette, co-owner and surgeon at the Newport Orthopedic Institute in Newport Beach, Calif., says doctors and hospitals better get over their anger and embrace the new model. Two years ago, the center began signing flat-rate prices with domestic travel companies.

“That’s where health care is heading,” Caillouette says. “We’re no longer going to be paid piecemeal.”