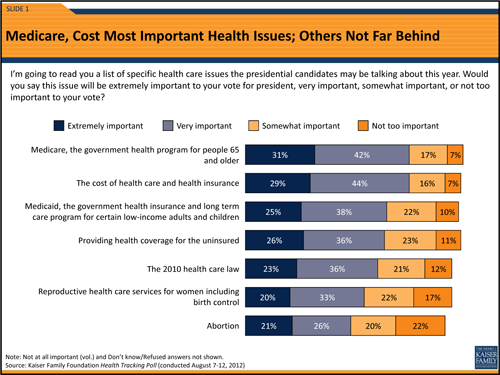 As Rep. Paul Ryan’s plan to overhaul Medicare makes campaign headlines, a majority of Republicans oppose changing the government program for seniors, according to a new poll by the Kaiser Family Foundation and the Washington Post. (KHN is an editorially independent program of the foundation.) That could spell trouble for presumptive presidential nominee Mitt Romney and his designated  running mate Ryan as voters focus on the Wisconsin congressman’s “premium support” plan.

Pollsters asked whether respondents wanted to continue Medicare’s current defined benefit setup, in which the government pays a specified portion of all medical bills incurred by the patient, or switch to a plan in which seniors get government grants to buy health insurance, as Ryan advocates. Fifty-five percent of Republicans surveyed preferred the status quo — slightly more than the 53 percent of independents who gave the same response. Sixty-eight percent of Democrats also chose “Medicare should continue as it is today” as representing their views. The poll was done in late July and early August, before Romney announced Ryan as his choice.

In another poll, released today, KFF found that Republicans rated the cost of health care and Medicare as more important to their votes than the 2010 health law that generates so much scorn from Republican politicians. Jobs are still Republicans’ economic top worry. But when asked how health issues would affect their vote, two-thirds of GOP respondents said the cost of health care and insurance is extremely or very important. Six in 10 Republicans said Medicare is important, while 54 percent gave the Affordable Care Act the same weight. Most of those interviews were also done before Romney picked Ryan.

Among all respondents, Medicare tied with the cost of health care as the top health issue, with 73 percent saying both would be important in how they vote, followed by the Medicaid program for the poor. In the KFF/Washington Post poll, jobs were the top economic issue among all those interviewed, with 63 percent of Democrats, 60 percent of independents and 55 percent of Republicans saying jobs were the top worry.