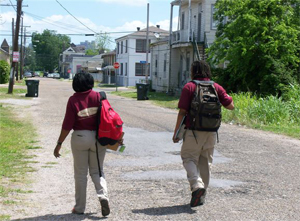 Pam Dixon and Terrance Bone both participate in the “Walkers/Talkers” program, which sends workers into the poorest neighborhoods to find uninsured children and then helps sign them up for Medicaid or the Children’s Health Insurance Program. (Phil Galewitz/KHN)

NEW ORLEANS – For 55-year-old Hilda Johnson, who cares for her two young grandsons, the “Walkers/Talkers” program was a godsend.

Johnson, who is disabled, didn’t know how to get insurance coverage for Bryce, 3, and Brian, 4. Then last year, someone from Kingsley House, a nonprofit agency that runs Walkers/Talkers, came to her house and helped her enroll the boys in Medicaid, the state-federal program for the poor. “They were more than helpful in doing all the paperwork,” she said. “Without this, I wouldn’t have known what to do.”

The program, which was started more than a decade ago, is one of the most aggressive efforts in the nation to reach children who are eligible but not enrolled in government health insurance programs – Medicaid and the Children’s Health Insurance Program (CHIP). The Walkers/Talkers program sends workers into the poorest neighborhoods to knock on doors in search of uninsured children and then helps sign them up.

Since its inception, the program has enrolled more than 7,000 kids. As a result of this work and other state steps to make enrollment easier, by 2009 only 6.3 percent of children in New Orleans were uninsured, down from more than 10 percent in 2003, according to research by Louisiana State University.

More From This Special Report

In some ways, Walkers/Talkers has become a victim of its own success. For the past eight years, Pam Dixon, 39, has visited homes and neighborhoods in some of the city’s poorest neighborhoods in search of uninsured children. A few years ago, two hours of knocking on doors in central city neighborhoods would yield at least four or five applications. Now Dixon and six other workers often end the day without signing up anyone. From last July through April of this year, the program helped enroll 270 children in Medicaid and CHIP. In its peak before Hurricane Katrina, it enrolled more than 1,000 children a year.

“It’s a good thing that we don’t find as many families needing our help, but it’s a bad thing in that it makes our jobs harder,” said Dixon, who, like many of the other workers, has lived in some of the low-income areas she canvasses.

In response to the falling numbers, the Walker/Talkers program has branched out, offering additional services such as screening elderly residents for depression and helping people apply for food stamps. Sometimes they help families on Medicaid find pediatricians.

The program is based on a “neighbor helping neighbor” model that the Annie E. Casey Foundation used in the mid-1990s when it hired local residents to provide education on sexuality to reduce the teen pregnancy rate. That effort was so successful that the foundation explored what other problems it could address by sending community workers door-to-door in poor neighborhoods.

Today, the Walkers/Talkers operates on a $600,000 budget provided mostly by foundations. It also gets $35 from the state for each successful application to Medicaid or CHIP.

In addition to going door to door, the program distributes Medicaid and CHIP applications at local businesses, churches, schools and other community organizations.

Patrick Chaulk, a senior associate for health at the Casey Foundation, says the program has succeeded because of the constant presence of the Walkers/Talkers in the neighborhoods where they used to live. “They have become trusted messengers,” he says.