Billions of dollars in drug savings for Medicare beneficiaries may come to an end if the Supreme Court overturns the 2010 federal health law, a drug industry spokesman said Tuesday. 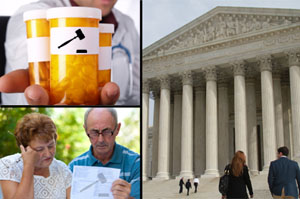 The law provides “the necessary legal framework” for drug companies to slash brand-name drug prices by half for seniors and people with disabilities when they enter a coverage gap in their Medicare drug plans, said Matthew Bennett, a spokesman for the Pharmaceutical Research and Manufacturers of America.  Eventually the discounts grow so that the gap, known as the doughnut hole, is closed by 2020.  But if the law goes, the discounts may go, too.

“Without that legal framework, there are many questions that arise about whether the discount program could continue,” he said.

As part of the negotiations in the health care debate in 2009, drug makers pledged $80 billion over 10 years to cut the doughnut hole expenses for consumers and help provide funding to cover the uninsured.

More than 5.1 million Medicare beneficiaries enrolled in the Part D drug plans saved more than $3.2 billion on prescription drugs from March 2010 through December 2011 because of the health law provision, according to the Centers for Medicare & Medicaid Services.  In the first four months of this year, seniors saved another $301.5 million.

Until the Affordable Care Act’s coverage gap drug discounts, “nearly one in four seniors reported skipping doses, cutting pills in half or not filling a prescription, simply due to cost,” Health and Human Services Secretary Kathleen Sebelius said at town hall meeting for seniors on Monday.

Voluntary drug coverage was added to Medicare in 2006, but consumers and advocates have been eager to get rid of the coverage gap. Insurance coverage stops when the beneficiary and the insurer together have spent $2,930 for prescription drugs, excluding monthly premiums. Under the health law, beneficiaries then get a 50 percent discount on brand-name drugs and 14 percent on generics drugs. When the beneficiary alone has spent a total of $4,700, coverage restarts. At that point, the beneficiary picks up 5 percent of the costs.

And even though the beneficiary doesn’t pay the full drug price while in the gap, the Affordable Care Act allows the full price to be counted toward the spending amount that triggers the resumption of coverage.

But if there is no law to ensure the coverage gap discount, drug makers are concerned that other laws might prohibit it, Bennett said.

For example, drug companies could try to offer the discounts on their own but that effort could run afoul of federal antitrust laws that generally prohibit businesses from agreeing together to set prices for their products.  An individual drug company could offer Part D members coverage gap discounts, but it would have to steer clear of anti-fraud laws that ban a company from giving something of value to persuade beneficiaries to use its products.

Similar concerns were raised in 2005, when drug makers were unsure about continuing their separate patient assistance programs that offer free or deeply discounted drugs for seniors who would also enroll in Part D plans the following year.  The Health and Human Services Office of Inspector General approved some discount programs but not others.  The agency has not provided any guidance on how drug manufacturers could continue offering the gap discounts within Part D.

Insurance companies that sell Part D plans could provide the discount on their own, but so far none have announced a willingness to do so.  UnitedHealthcare, the nation’s largest health insurer, is one of several companies that have said they would preserve some consumer protections if the law were scrapped.  When asked if the company would also keep the drug discount for its Medicare members, a spokesman said the company was not considering voluntarily adopting any other provisions of the law.