Jana Gundy and Amanda Chaffin live within two hours of each other in Oklahoma. Each has a child with the same devastating disease, one that robs them of muscle strength, affecting their ability to sit, stand or even breathe.

So both families were ecstatic when the Food and Drug Administration approved the first treatment for the genetic condition — known as spinal muscular atrophy (SMA) — two days before Christmas 2016. It seemed the gift they had been waiting for — a chance to slow the heartbreaking decline of their young sons.

But that common hope has taken them down different paths: In April, Gundy’s child, who is on private insurance, began getting the drug Spinraza, which costs $750,000 for the initial year of treatment. Chaffin’s child — a Medicaid enrollee — was not receiving the drug, as his state regulators debated whether to offer it to children like him who use ventilators to breathe.

Across the country, similar stories are playing out as private insurers and already-squeezed state Medicaid programs wrestle with what, if any, limits to place on patients’ access to break-the-bank drugs, weighing the needs of the ill against budget realities.

At the same time, policymakers and physicians increasingly demand to understand why drug manufacturers affix price tags that have risen to once unimaginable levels.

“It looks like a drug that works for a tragic condition that afflicts children and cripples and kills them. That’s the good news,” Jerry Avorn, a professor at Harvard Medical School, said of Spinraza. But “how in the world did the price of $750,000 a year get chosen?”

Biogen, the maker of Spinraza, defends its price. “We compared industry norms for other drugs in rare disease. We looked at the efficacy and safety profile of the drug itself,” said Wildon Farwell, senior medical director of clinical development at Biogen, which covers the cost of the drug for patients who are denied by their insurers.

But that logic — comparing a new drug to extremely high-priced drugs already on the market — has only fueled an inflationary cycle, Avorn said, adding: “In my view, that’s akin to a kid who gets caught bullying another kid and beating him up after school, and says, ‘Well, all the other kids were beating him up so it’s OK.’ If it’s wrong, it’s wrong.”

The stress is unbearable for families trying to obtain treatment for sick children — caught in the arcane world of coverage decisions and businesses’ price calculations.

“The longer we wait, the more … [his ability to move] will be gone and there’s a chance of not getting it back,” said Chaffin of Kayden, her 4-year-old son, who was diagnosed with SMA as an infant.

At the same time, Gundy watched hopefully as her 12-year-old son, Kyle, who also uses a ventilator, received the first three of the six doses he will get this year, following approval by his private health insurer. Said Gundy, “We’ve seen some minor muscle movement return.”

Spinraza isn’t a cure for SMA, which affects 10,000 people in the U.S., but clinical tests show it holds promise for some. Scientific discoveries by researchers at the University of Massachusetts Medical School in the early 2000 — partly funded by grants from the National Institutes of Health and donations from patient-advocacy groups — helped pave the way for Spinraza.

The drug was granted “orphan” status, which provides tax credits for research and helped speed the review process. It won approval in five years after the start of clinical trials, based on results of a few small studies. The FDA cited interim results from one of those studies in giving its OK in which 40 percent of the patients given the drug showed improvement, compared with none in the control group. Final results came later, showing 51 percent of treated children demonstrated improvement. It was tested only on children, most under age 2, though it was approved for pediatric and adult use.

All that means Biogen’s research and development costs likely were not unusually high, although the company would not release figures. Five days after getting the FDA’s approval to sell the drug in the U.S., Biogen announced the price: $125,000 a dose, or $750,000 for the first year. Fewer doses in following years drop the total annual cost to $375,000. The drug must be taken for life.

The FDA does not know or consider pricing when it grants approval.

If just half of U.S. patients get treatment for one year, the tab would be more than $3.7 billion. Spinraza brought in $203 million in the second quarter of this year, more than four times its revenue in the first quarter. 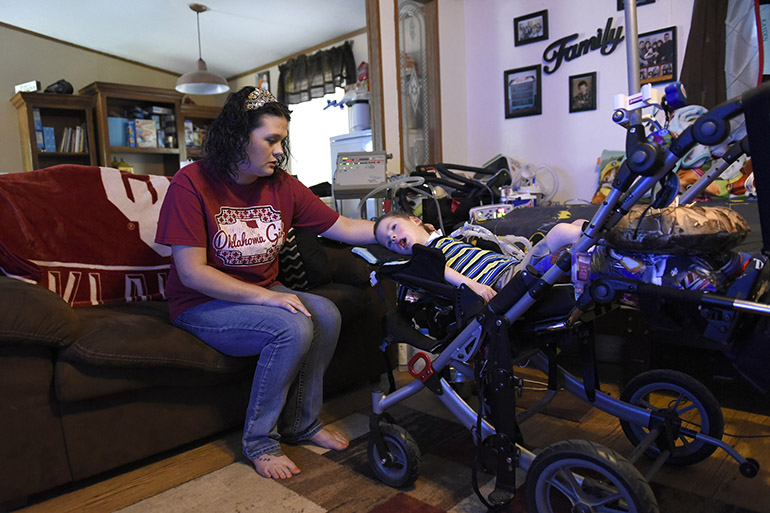 Amanda Chaffin comforts son Kayden, 4, who has a genetic condition called spinal muscular atrophy, or SMA, and depends on a ventilator to breathe. (Nick Oxford for KHN)

When Biogen unveiled the price tag, one Wall Street analyst at Leerink predicted “a storm of criticism” and that insurers would parse “which patients receive access.”

Families that include a child with SMA are a close community, and Chaffin keeps in touch with other SMA families via Facebook, where the have-nots can watch what happens with the kids who received the drug.

“There are similar kids his age that live in different states and are [on a ventilator] and they are seeing movement come back and strength coming back,” said Chaffin. Because SMA often affects the muscles around the mouth, “Kayden lost his smile in 2014, but he has a little smirk left. These parents are seeing their smiles coming back.”

Good news came in late July: After receiving the required two denials from her state’s Medicaid program, Kayden was accepted into Biogen’s patient-assistance program, which covers the cost of the drug. The program helps patients’ families navigate their insurance, covers the cost of the drug if they are denied and, in some cases, helps with other costs, too. In the second quarter of this year, about 20 percent of Spinraza doses were provided free in the U.S, according to a company spokeswoman.

But it isn’t available to everyone: Some government programs — Medicare and Medicaid, for example — restrict efforts to eliminate copayments for drugs.

Kayden will get his first injection in mid-August — eight months after the drug was approved. Now his low-income family has one more hurdle: finding the estimated $2,000 per injection to cover doctor and hospital costs for the six shots Kayden will need in the coming year. A spokeswoman for Oklahoma’s Medicaid program said Chaffin doesn’t need to worry: The associated costs of injecting the drug will be covered.

Aside from the financial questions, there are other unanswered concerns among families and medical professionals.

Will Spinraza work in older children or adults? No children involved in the study were on ventilators at the start of the trial. Is it safe for children on a ventilator? Also, because SMA’s rate of decline varies, how can doctors, families or insurers measure if the drug is stalling the disease’s progression? And, finally, how long will its effect last?

For some fast-track drugs, like Spinraza, FDA approvals don’t offer this kind of guidance.

Dr. Susan Apkon, who treats dozens of children with SMA at Seattle Children’s Hospital and who urged Washington state’s Medicaid pharmacy board to cover it, said there is no easy answer.

“If a drug works, we want to give it to the child or adult, whatever the drug is,” said Apkon, who does not receive money directly from Biogen but is a co-investigator in one of the company’s ongoing studies.

Still, she acknowledges, “there is one pot of money, and we need to figure out how it gets distributed,” she said. “The system is broken.”

With any costly new drug, it all comes down to “tough choices,” said Jack Hoadley, a researcher at Georgetown University’s Health Policy Institute. “Treating one of these patients may mean not treating 1,000 patients with some other, less expensive problem — or saying they have to raise more tax dollars,” he said. “Private insurers have the same trade-off. Do we pay for this if it will ultimately raise our premiums?”

Coverage eligibility varies by insurer and, in Medicaid, by state.

Most insurers and Medicaid programs require that patients show some kind of proof of progress — or at least maintenance of function — in order to continue therapy beyond initial doses.

During a recent meeting with Biogen officials, Sullivan was blunt: “I told them the price was unethical.”

In her state, there are about 150 children with SMA. After reviewing the data on Spinraza, Washington Medicaid approved broad coverage rules, including allowing patients on ventilators to get the drug. Large new spending outlays put additional pressure on state budgets, which, especially if combined with economic downturns, can lead lawmakers to trim medical provider payments or optional Medicaid services, which include adult dental care, podiatry, chiropractic treatment and other services.

Crystal Ramos, of Pasco, Wash., whose 3-year-old twins have SMA, is thankful that Medicaid covers the drug. After four doses, she is already seeing some improvement in her boys, Harper and Hendrix.

It’s the little things. Hendrix, who was never able to walk, now has enough strength to cough and expel mucus. That’s important because it could help prevent pneumonia. Harper — the stronger of the two — looks as if he might be able to crawl.

The boys are on her insurance through her job as a teacher, but Medicaid picks up what her private insurance does not, which totals about $2,500 per injection.

She calls Spinraza’s price “beyond crazy.”

“They’re putting a price tag on life, which sucks,” she said. “In the end, we have to pay it if we want our kids to live, and they know it.”

Clarification: This story was updated to add more information about the data analysis the Food and Drug Administration used in approving Spinraza and to add a comment from Oklahoma Medicaid.