The federal government will be opening new online marketplaces for health insurance in 34 states on Oct. 1. State governments are opening their own on the same day in the remaining states.

They’re getting into a business that eHealthInsurance.com currently dominates. It’s operated a clearinghouse-style online exchange since 1999 that’s very similar to what state and federal governments plan to launch next month, where people who want to buy individual insurance policies enter some personal information and get the chance to buy plans from multiple carriers. 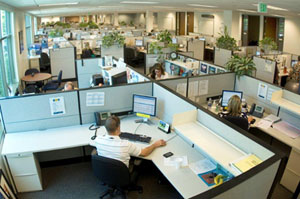 EHealth CEO Gary Lauer says he views his company as more of a partner than a competitor with the federal government as it works to get the Affordable Care Act (ACA) up and running.

“If we don’t utilize all the viable means to get people enrolled, this legislation may very well fail,” Lauer said, adding: “If we don’t get broad and deep enrollment across the country, this legislation is not going to work. We’re really good at this. Hopefully, these government exchanges will be good at it as well.”

The woman in charge of the federal exchanges, CMS Administrator Marilyn Tavenner is confident they’ll work. And she says the White House is welcoming all the help it can get to reach its goal of enrolling 7 million Americans in new health coverage in 2014.

“Agents and brokers do a tremendous amount of work, so, to that extent, they’re valued partners and we want to work with them,” she said during a recent visit to Colorado.

But before recent regulations were written, it wasn’t clear what the relationship would be between online brokers like eHealthInsurance and the ACA. Would states and the federal government have a virtual monopoly on selling individual and small group polices online?

“That was going to pretty much delete – remove? Obviate? Whatever word you want to use – us, from the landscape,” Lauer said.

He spent a lot of time in Washington lobbying for access to the market. And he got it: On July 31, eHealth and four other online brokers inked a deal with the federal government to sell Obamacare policies and link their customers to the subsidies. In 2015, new ACA subsidies could help an estimated 11 million Americans afford coverage they don’t have now. Lauer views that as a business opportunity.

As of now, eHealth will sell insurance in the 34 states that will have federal exchanges. The company is currently negotiating for access to the 16 state-run marketplaces but hasn’t signed any agreements yet.

And while Lauer downplays competition with the federally-run marketplaces, he’s confident that his Silicon Valley-based company has some advantages over the governmental players.

“This is new for government. Government’s going into the e-commerce business, it’s as simple as that.” Lauer said. “But e-commerce is not simple. It’s very complex, it’s very fast-moving. Consumers are very aware, and they’re very demanding.”

Still, e-brokers have at least one competitive disadvantage: Insurance companies pay a commission on every policy brokers sell for them. They’ll pay no commission on policies sold in the new online government marketplaces.

The federally-run marketplaces will assess a 3.5 percent fee on every policy they sell, but policies sold in private marketplaces have to pay that, too, in addition to whatever sales commission they negotiate.

So why would insurance companies continue pay commissions to e-brokers, if they can get listed on the federally-run online marketplaces essentially for free?

He says eHealth has invested over $100 million building its web presence over more than a decade. It has a track record of finding customers online and successfully shepherding them all the way from window shopping to sale.

“That’s why they’re willing to pay the commission,” Halper said. “Nobody really knows if the federal exchange on its own will be as effective as eHealth.”

eHealth also works hard to keep its site at the top of internet search engine results, so people hunting for coverage that meets the ACA’s requirements may well end up at eHealthInsurance.com instead of the online marketplace the federal government is running in their home state.

Halper won’t speculate on whether government or privately-run online marketplaces will win more customers. He thinks a substantial number of Americans will blow off the health law’s requirement that everyone have insurance and choose to pay a tax penalty instead.

But how people respond to the health law’s new provisions next year is contingent on a complicated mix of politics, technology and market behavior – and it is very much an open question.

“I’m not betting on anybody,” Halper said. “The problem with trying to forecast the outcome, is that you really don’t know how many people are actually going to buy insurance in 2014.”

This story is part of a reporting partnership that includes NPR and Kaiser Health News.

Obamacare Will Be Both Ally And Rival To eHealthInsurance