Jenn McCorkle still regrets giving birth early. McCorkle was 37 weeks pregnant when her obstetrician scheduled her for a Caesarean section the following week, saying there was no reason to wait.

But when her son, Maverick, was born in August 2008, his lungs were not fully developed; within hours, one of them collapsed. The infant spent the next 13 days in a neonatal intensive care unit (NICU), most of them hooked up to a ventilator. 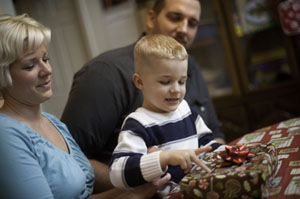 Jen McCorkle, her husband Jeremy and son, Maverick, 4, whom she gave birth to early. Studies suggest that inducing labor before 39 weeks of pregnancy increases an infant’s risk for complications (Photo by Jeffrey Swensen/For KHN)

McCorkle wishes she had known what decades’ worth of studies have found: that inducing labor or performing Caesarean sections before 39 weeks of gestation for no medical reason significantly increases a newborn’s risk of complications and even death.

While most babies delivered at 38 weeks do not end up in intensive care, research shows they are more likely to have feeding, breathing and developmental problems than those born at 39 or 40 weeks.

Since 1979, the American College of Obstetricians and Gynecologists (ACOG) has recommended against deliveries or induced labor before 39 weeks unless there are medical reasons, such as the mother’s high blood pressure or diabetes or signs that the fetus may be in distress.

Still, an estimated 10 to 15 percent of U.S. babies every year are delivered early without medical cause, according to the Department of Health and Human Services.

“After 37 weeks, patients really push for it because they are miserable and don’t want to be pregnant anymore,” said Alfred Khoury, director of maternal-fetal medicine at Inova Fairfax Hospital, which does not do such deliveries without medical cause. “Or they say, ‘My mother is here’ or ‘I have to be in a wedding.’ ”

In addition, physicians working in solo practices or in rural areas may prefer to schedule deliveries before 39 weeks to help manage their schedules, said Helain J. Landy, chairman of the department of obstetrics and gynecology at MedStar Georgetown University Hospital, which prohibits such deliveries. “The reality of caring for patients, or [doctors’] day-to-day needs, may sometimes interfere with following the guidelines,” she said. 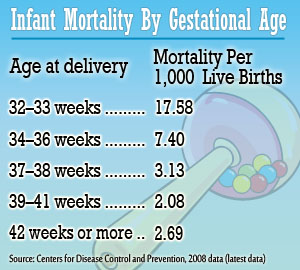 Now, though, some government and private insurers are discouraging and in some cases penalizing doctors and hospitals for delivering babies early without cause.

Their goal is to reduce care in NICUs, where the average charge is $76,000 per stay, and to avoid subsequent medical costs to treat such problems as jaundice, feeding problems and learning and developmental issues.

Beginning Jan. 1, UnitedHealthcare, the nation’s largest private health insurer, began paying hospitals more money if they take steps to limit early deliveries without medical cause and show a drop in their rates.

Starting in July, Medicare, which pays for thousands of births to disabled women every year, will require hospitals to report their rates of elective deliveries before 39 weeks. Hospitals may be penalized beginning in 2015 if their rates remain high.

A few insurers are refusing to pay for such deliveries altogether. As of Jan. 1, the South Carolina Medicaid program and BlueCross BlueShield of South Carolina stopped reimbursing providers for performing early deliveries without medical cause. Together, the two insurers pay for 85 percent of births in the state. Texas implemented such a policy in 2011, and New York and New Mexico are considering similar actions, according to state officials.

Without prodding from the government or insurers, some hospitals have taken steps to curtail elective early deliveries.

In 2011, St. Joseph Medical Center in Houston stopped performing them after reviewing studies and hearing from the March of Dimes, a nonprofit that works to prevent birth defects and infant mortality. In that first year, NICU admission rates for babies born between 37 and 39 weeks dropped 25 percent, said Eugene C. Toy, an obstetrician who championed the effort.

“When we saw their numbers, we said, ‘Wait a minute. Why isn’t everyone doing this?’ ” said William Glomb, a neonatologist and medical director of Texas Medicaid. Texas subsequently became the first state to stop paying for such deliveries through its Medicaid program.

A study undertaken by 27 hospitals owned by HCA Holdings, the nation’s largest for-profit hospital chain, found that educating doctors about the risks was less effective in reducing rates of early deliveries than having medical staff prohibit the practice.

Some physician groups, however, resist being told how to practice. 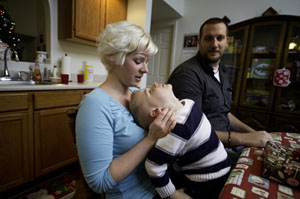 Despite being born early, Maverick, 4, is now healthy (Photo by Jeffrey Swensen/For KHN).

“We oppose the legislative control of medicine,” said Jeanne Conry, president-elect of ACOG. Conry says her organization has developed its own “clear, effective guidelines” laying out clinical markers for determining when early delivery might be appropriate.

Even Toy, the St. Joseph obstetrician, opposes the Texas Medicaid policy inspired by the experiment at his hospital.

When states or insurers get involved, Toy said, doctors may hesitate to deliver early even when there are clinical reasons to do so. “Outcomes are best when there is a doctor-led process, rather than a legislative or payment mandate,” he said.

The March of Dimes is also wary of using financial rewards or penalties.

“Payment is a really big hammer, and we want to have a comfort level with a policy so we don’t cause unintended consequences,” such as making doctors reluctant to perform early deliveries even when they are needed, said Cindy Pellegrini, a senior vice president at the nonprofit. Among other difficulties, she cited the challenge of determining a baby’s gestational age.

‘Do The Right Thing’

Some doctors applaud such steps, however, saying the are necessary to drive change. Amy Picklesimer, an obstetrician at South Carolina’s Greenville Hospital System, said the tough stance taken by her state’s Medicaid program and others “helps us all do the right thing” and makes it easier to educate women.

To win support from doctors and hospitals, some states are trying incentives rather then penalties. Washington state’s Medicaid program last year began paying a 1 percent bonus to hospitals that met several quality targets, including reducing their early elective delivery rates. And in the past two years, Oregon, Louisiana and Michigan have asked hospitals to voluntarily stop such deliveries.

Despite such efforts, though, only a third of hospitals report rates of elective early deliveries at or below the goal of 5 percent, according to data they submit to the Leapfrog Group, an employer group focused on patient safety. Many still have rates exceeding 15 percent, the 2011 data show.

“Saying you won’t pay for early elective deliveries is a very controversial thing to do, because hospitals don’t like it and some doctors don’t like it,” said Leapfrog’s chief executive, Leah Binder.

Because complications are rare and neonatal care has become so good, obstetricians rarely see the negative effects of some early elective deliveries. “Most babies do so well that we have all got fairly complacent toward late preterm deliveries,” MedStar Georgetown’s Landy said.

Another issue is that under current payment systems, hospitals profit from admissions to their neonatal intensive care units.

Carol Wagner, senior vice president for patient safety at the Washington State Hospital Association, said payment incentives need to change so hospitals aren’t hurt if they crack down on the procedures.

Educating expectant mothers is also key to reversing the trend. A 2009 survey of 650 women who had recently given birth found half considered it safe to deliver before 37 weeks.

Before the birth of Maverick, McCorkle had no idea of the dangers that early deliveries can pose. (Her obstetrician did not respond to phone calls and e-mails seeking comment.)

Today, the Pittsburgh-area mother is grateful that Maverick has grown into a healthy 4-year-old. And she takes every opportunity to urge expectant mothers to learn from her experience.

“Wait as long as possible against having a C-section or being induced,” she said. “And don’t schedule it unless there is a medical reason.”